Every now and again, Husband and I get a bit of wanderlust when it comes to where we live and we start to look at other places in the country which would be more suited to us than the South East. As it stands, our first choice would probably be Liverpool, but recently we’ve been reading about Leicester and all of the ways in which it’s a great place to raise a family. With this in mind, i thought I’d share some of those with you today:

END_OF_DOCUMENT_TOKEN_TO_BE_REPLACED

Photo by Johnny Africa on Unsplash

Greece is a country that I’ve wanted to visit for a really long time and will probably be quite high up on the list once we start planning our next family holiday. It’s one of those places that has everything I could want – history, amazing food, vibrant culture, fantastic activities, nightlife, and white sandy beaches – what more could a girl want from a holiday destination?! With this in mind, I’ve been doing some reading about the different Greek islands and villas in Mykonos and have learned that there are some ideal places for each different type of holiday maker, so I thought I’d share what I’ve learned:

END_OF_DOCUMENT_TOKEN_TO_BE_REPLACED 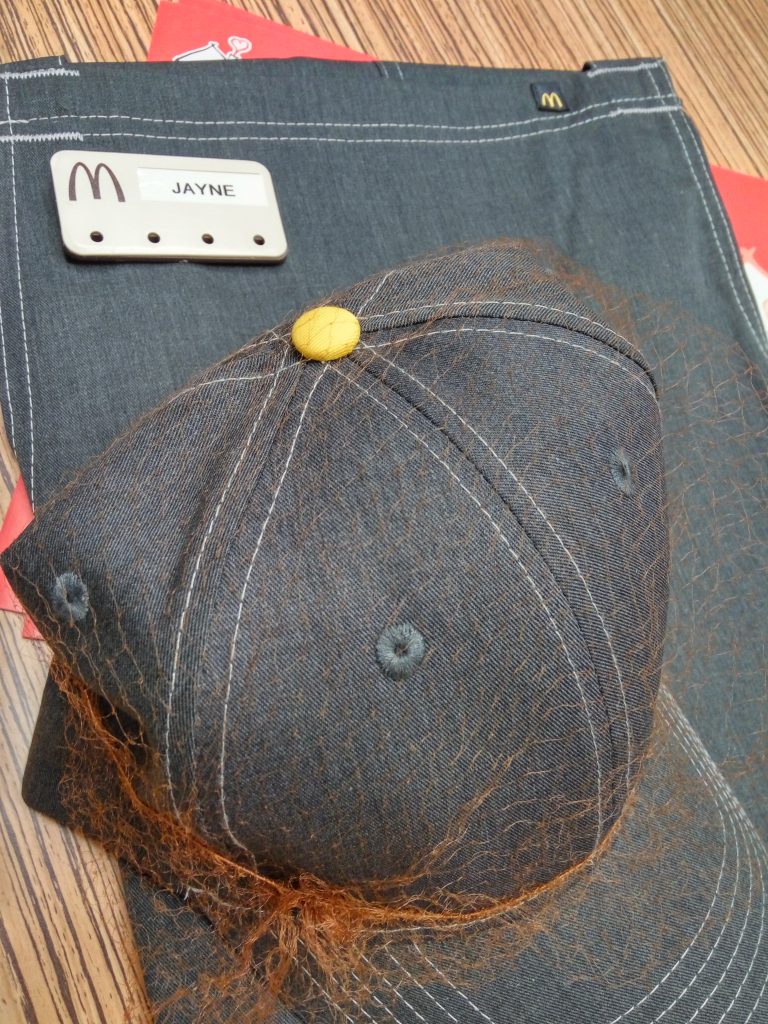 Last night, I had a pretty unusual experience. I was asked along to a local branch of McDonald’s to get a behind-the-scenes look at how a busy store operates and to learn how to make my very own Big Mac – not something you get to do everyday, so of course I agreed! I won’t lie, I went there with a few preconceptions of how I’d find the whole thing but I’m delighted to say that I was pleasantly surprised from beginning to end.

McDonald’s is obviously famous for its fast food but what I was surprised to find out is that everything is actually made to order – long gone are the days of burgers sitting in a heater, ready to be shoved in a bag. As soon as your order is put in, either by giving it to someone at the counter or drive-thru window, or by using McDonald’s swanky new technology which allows you to use a touch-screen to make your order and have it brought to you by a server, it’s put through to someone in the kitchen who builds it all for you from scratch. 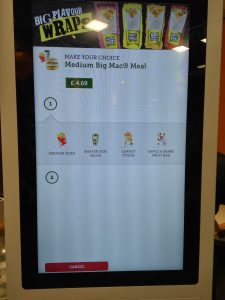 If I’m honest, the whole experience was quite overwhelming; a veritable information overload if you will! Here’s a quick overview of some of the things I learned:

In terms of what I actually observed whilst looking around the restaurant and kitchens, the thing which was most impressive was just how spotlessly clean everything is. Employees are require to stop working every thirty minutes without fail to wash their hands at an amazing sink which you operate with your knee and the whole time we were there, if something wasn’t in use, it was being cleaned.

Obviously, making a Big Mac was VERY exciting for myself and the two other bloggers who attended and the young man who took us through the process was really knowledgeable and patient (good job really, he took a matter of SECONDS to make a burger while we took waaaay longer!). Although I was sad to not come away with the recipe for McDonald’s famous burger sauce, I was pretty tickled to see that it comes in a special gun which dispenses five perfectly even dots of sauce. The whole process was actually pretty intricate (did you know that the gherkins in their burgers are even specifically placed for optimum flavour distribution?!) and I feel like the whole experience gave me a new appreciation of how hard those guys work and how much effort is actually put into the making of the food. 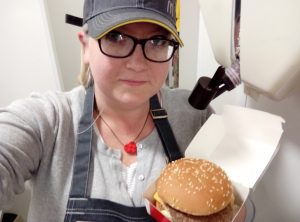 Although we’re fans of McDonald’s in the Mum’s the Word house, Husband and I have always viewed it as a guilty pleasure which was only to be enjoyed on rare occasions but after learning about the origins of the produce that McDonald’s uses, as well as seeing how fresh it all is, I definitely won’t be feeling bad about eating it or giving it to the girls in the future.

Another focus of the evening was the new technology which is being installed throughout the stores. As I mentioned above, McDonald’s now have self-ordering screens, which allow you to browse the whole menu and even customise your food before ordering. You’re then given a choice of ‘zones’ in which to sit before a server brings you your meal. Burrito Baby and I actually used this service before and I cannot even begin to tell you how much easier it makes things when you don’t have to carry a fully-laden tray to your table whilst wrangling a toddler. It also makes things easier for disabled customers and the screen even shrinks so that wheelchair users can still reach it all.

I was a little concerned that this level of automation meant that McDonalds had cut down their workforce but I was really happy to hear that this store in particular had actually employed MORE people to cover the kitchens and table service. There was also FAR less congestion on the shop floor – instead of queuing for ages and waiting for food, people were ordering and taking a seat which meant that there were minimal queues, despite the restaurant being full of diners, and that it was actually MUCH quieter.

The store we visited also had a family seating area which had iPads installed for kids and their parents to use and literally every single one was in use while we were there, so they’re obviously popular. Much of this new technology has been installed in response to feedback from customers about what they’d like to see in stores and is all part of the plan for the McDonald’s of the future, and I have to say, it’s so nice to see such a big chain listening to its customers and actually acting on what they learn.

Between the recycling, the reduction of carbon footprint, the quality of the food, the new tech and the beautifully redesigned restaurants, I feel like my preconceptions of what McDonald’s really is were absolutely smashed. This is clearly a company who cares about both its employees AND its customers, as well as the environment and the local community, which is a breath of fresh air. McDonald’s have really impressed me and I hope that they share their achievements with the general public so that they can have their minds changed to.

(as a weird side-note – I had my hair done yesterday morning and kept thinking “Oh no, I’m going to stink of chip fat by this evening!”. The kitchens at McDonald’s have this special type of air conditioning which not only kept the whole place really cool, but means that you don’t come out of there stinking either. In fact all of us remarked that the prevailing smell throughout the whole place was of fresh bread.)

Thanks to McDonalds for a fun evening.

(Although this is a sponsored post, all opinions are my own and reflect my sincere thoughts and feelings of the experience)