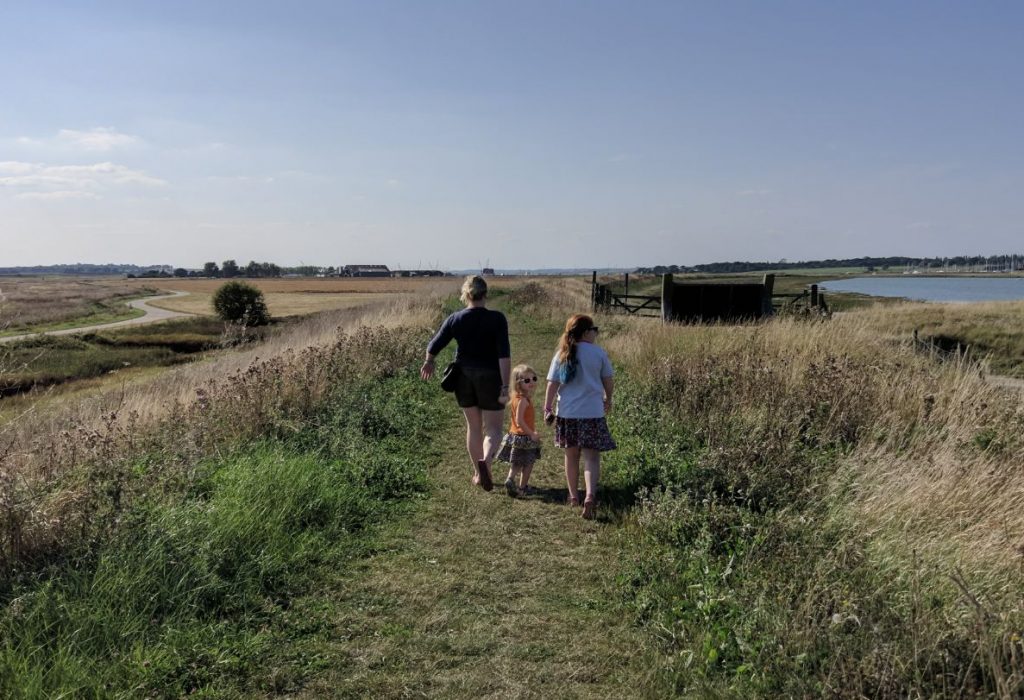 For many people, January is a time of new beginnings, however I always feel like September is that time for me. Summer is over and we move into a new school year and a new season of cooling weather and falling leaves. I always start September feeling inspired to do more, and my creativity seems to rekindle itself in Autumn for some reason. This September has been no different, and a lot has been happening in our house. Husband and I have both had new projects at work, Sausage went into Year 5 and 11+ prep, but perhaps the biggest change is BB starting nursery.

I’ve been adamant for months that nursery was the right thing for BB as she has some shyness that she needs to get over as well as some attachment issues, but it’s been a lot tougher than I anticipated. She was fine for the first two days of her settling-in week, then had tears on the Friday. The next week was hard too, with tears on Monday, culminating in almost-hysterics on the Wednesday which led to me taking her home early. The following week, she got tonsillitis so missed a whole week of sessions, and she even said to us that she was glad she felt ill because it meant she didn’t have to go to nursery. To say it was breaking my heart is an understatement.

For us, it’s a really fine line between getting her used to being away from us in preparation for school and traumatising her when she’s barely ever been away from us. Helping her confidence to flourish is a big part of the growing process. However, I also don’t want to give her the idea that she can have a tantrum and get out of ever doing anything outside of her comfort zone, and the point about her getting prepared for school still very much stands.

When Sausage started nursery, she was always quite happy to go, so leaving her was a lot easier;  it was only by the time she got to Reception that she started to hate it, and by then it was compulsory, so I didn’t have the option to just take her home again. Nursery isn’t compulsory, and I can’t shake the feeling that I’m losing out on precious time with BB which I won’t have the option to have back once she’s at school next year.

I think the fact that she’s my last baby is having an impact on my mindset. Husband and I agree that two kids are enough for us and that we like the dynamic of our family the way it is, and besides, having the health conditions I have mean it wouldn’t be a good idea for me to have another pregnancy anyway. However, it means that I’m having to deal with the fact that this is the last time I’ll do nursery drop offs, the last time I’ll have a three-and-a-half year old, the last time I’ll do any of this. Our family is growing up and while I love that in many ways, it doesn’t mean I don’t feel slightly sad about it, too.

BB is pretty advanced in a lot of ways and having a big sister means she’s probably growing up a bit faster than Sausage did, so coming to terms with the fact that our last baby isn’t a baby anymore is tougher than I expected. She still loves a snuggle and still holds onto my ear when she’s tired. She still asks for help eating her porridge and putting her shoes on, and still wants company while she’s on the loo. But she also refuses to watch Paw Patrol anymore, because it’s “for babies”, and wants to be a “big girl” all the time. It’s an inbetweeny stage for all of us and she’s charging towards school-age a lot quicker than I ever expected her to.

She went to nursery again today after her week off ill and went in with minimal fuss – I waited around the corner and spied on her after five minutes and she was all smiles. She came out full of beans, having baked a cupcake and made a new friend, so we’re hopeful that this positive experience will help going forward. I guess I need to just enjoy the little remnants of her baby-hood while they last, because I don’t think they’ll be sticking around for too much longer.