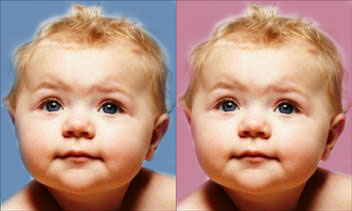 If there’s one thing which really boils my piss it’s the whole ‘blue is for boys, pink is for girls’ thing. I’m sure there’s some sort of societal explanation for why it’s so ingrained in our minds, but it’s something which seems more prevalent than ever – I spend a fair amount of time browsing Facebook groups and the amount of times I see people asking if anyone is selling a “baby walker for a girl” or whether it’s acceptable to put a girl in a red pushchair or a boy in a purple pushchair just drives me mental.

We were in Waitrose yesterday buying glue for my cousin who was doing an art project for college and my girls noticed that there were glues which were ‘pink for girls and blue for boys’. I was pretty proud when Sausage scoffed at the idea of gendered glue, and I’ll tell you what I told them: Unless you need a penis or a vagina in order to operate something, it’s NOT exclusively for one gender. If you want blue glue, having a foof DOESN’T preclude you from buying said glue.

All of this brings me to something else I saw today in another Facebook group (STOP JUDGING ME). A lady mentioned that her and her Husband were talking about what their baby son would look like in a dress, so they bought him one in the Tesco sale for a bit of a giggle and then posted the pictures for us to see. I had to giggle at the comments below – people seemed genuinely surprised that this lovely little boy looked…LIKE A GIRL. Yep. Dressing a baby in a dress made him look like a girl. Shock. I think the woman and her Husband are pretty awesome and it made a point so succinctly.

Let me let you in on a little secret: your baby is an amorphous lump. Generally speaking, unless you know what it is, it doesn’t often look like a boy OR a girl. This is why it is absolutely ridiculous when people are offended by people mis-gendering their child. Yes, I get that dressing them in blue or pink is a handy way to indicate what they are but A) why does it matter how people interpret your baby’s gender and B) WHY DO YOU CARE IF THEY GET IT WRONG?!

Sausage was our first baby and as such was bought a whole ton of girly stuff by both us and well meaning relatives. I remember finding it infuriating that I’d have her dressed head to toe in pink but old people would still refer to her as “he” and I’d be thinking “BUT SHE LOOKS LIKE A GIRL!”. But did she? Did she REALLY? Defining features are absolutely unapparent on MOST babies and I guarantee if we’d have dressed her head to toe in boys clothes, people could just have easily identified her as a boy.

With BB, we were far less strident about plastering her in pink. BB is a really different creature to her big sister and has always been super physical, and the sad fact is that a lot of baby clothes from the girls sections just aren’t geared towards girls who run around and dig in the mud, whereas boys clothes are a lot more forgiving. Equally, last summer when we wanted to get her some shorts for running around in, the only ones we could find which weren’t pretty, lace-edged impractical things were a pair of grey jersey shorts from the boys range in H&M. She’s been called a he a fair few times and I don’t even correct people now because it simply doesn’t matter.

All I’m saying is, while you may look at your little darling and think they’re the most handsome/prettiest creature ever born, a random onlooker very likely just sees BABY. Not Baby Boy or Baby Girl. JUST BABY. Don’t be offended when they get it wrong, it’s a waste of your energy and if you think about it, it’s really not all that offensive anyway. Use your energy more wisely…like, spending it looking for clothes which are green, purple, yellow, red or white…all colours which I suspect are yet to have been pigeonholed!