“Intersex” is a general term used for a variety of conditions in which a person is born with a reproductive or sexual anatomy that doesn’t seem to fit the typical definitions of female or male.

(I apologise in advance if I use any incorrect terminology, my aim here is not to offend anyone, only to start a conversation)

If you’ve been anywhere near the news in the past few days, you can’t fail to have missed the furore surrounding South African middle-distance runner Caster Semenya and the questions over her gender. In case you have missed it, here’s a TL:DR of the situation: Caster, born in 1991, won a gold medal in Rio in the womens’ Olympics, however there have been complaints from other athletes because she has high levels of testosterone, which they claim gives her an advantage. 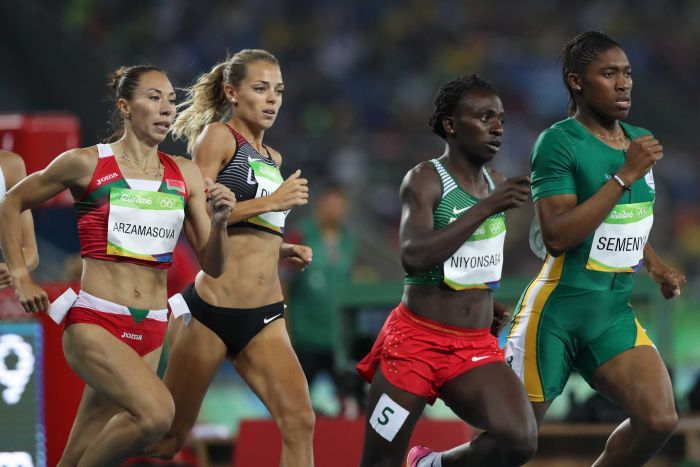 When I first started reading about this, I came across an article where they said that it had become common practice for Semenya to go into the bathrooms before a race to show one of her competitors her genitals to “prove” her femininity, which sounds absolutely appalling and like a gross invasion of her privacy and I was genuinely shocked to read that she had to go to such lengths to confirm her eligibility to race.

However, the controversy takes a slightly different slant when you consider her internal physiology. You see, according to official reports, Semenya has high levels of testosterone which is produced by internal testes and she also lacks a uterus and ovaries. The officials who deal with eligibility to race have stated that there’s insignificant evidence to suggest that testosterone gives her a significant advantage over the other athletes, however, several other athletes with the same physical attributes as Semenya took steps to change this, as reported in the New York Times:

At the London Olympics, four female athletes, all 18 to 21 years old and from rural areas of developing countries, were flagged for high levels of natural testosterone. Each of them subsequently had surgery to remove internal testes, which produce testosterone, as well as procedures that were not required for resuming competition: feminizing vaginoplasty, estrogen replacement therapy and a reduction in the size of the clitoris.

One could argue that many athletes have physical attributes which make them “unusual” in the grand scheme of things, but which give them an advantage when it comes to sporting prowess. Take Miguel Indurain, for instance. He’s a Spanish cyclist who won FIVE consecutive Tour de France in the early to mid-Nineties and is considered cycling royalty to this day. However, he has a huge physical advantage; his blood took almost double the oxygen of a normal person and his cardiac output was 50 litres a minute; a fit amateur cyclist’s is about 25 litres. No-one suggested that his physiology was an unfair advantage, just a happy anomaly which, ultimately, made him a legend.

So, if the issue isn’t physiological, then is it a gender issue? Well, Semenya identifies as a woman and has spent her entire life living as a woman; from what I can gather there’s never been any suggestion in her life of any sort of gender dysphoria or questions over how she identifies, which makes it clear cut, right? Maybe not.

Fallon Fox in white, before her fight with Tamikka Brents (pink bottoms)

Another similar case in sport was that of MMA fighter Fallon Fox. Featherweight champion Fallon underwent gender reassignment surgery back in 2006 and entered the MMA as a female fighter. Not only has she had her male reproductive organs removed but she has been on hormone therapy for many years, however she’s faced massive opposition and controversy within the MMA community because people feel that her physicality gives her an advantage, not least of all when she fought Tamikka Brents, and “Brents suffered a concussion, an orbital bone fracture, and seven staples to the head. After her loss, Brents took to social media to convey her thoughts on the experience of fighting Fox: “I’ve fought a lot of women and have never felt the strength that I felt in a fight as I did that night. I can’t answer whether it’s because she was born a man or not because I’m not a doctor. I can only say, I’ve never felt so overpowered ever in my life and I am an abnormally strong female in my own right,” she stated. “Her grip was different, I could usually move around in the clinch against other females but couldn’t move at all in Fox’s clinch…””

Fox argues that her hormone therapy probably means that she actually has LESS testosterone than her competitors, but this doesn’t alter the fact that testosterone played a part on how she developed physically in the first place, until her reassignment surgery.

It’s all such a grey area. Traditionally speaking, men and women have never competed against one another because of the clear physical differences, but that doesn’t mean that there’s no middle ground. Obviously, it’s rare to see a woman who’s the size of say, Mike Tyson, with the same bone structure and heavy musculature, but there are plenty of female fighters who probably make Conor McGregor look like a leprechaun with his featherweight frame. But does size equal strength? No, definitely not.

All of this is leading to a point…honestly!

While I’m not suggesting that being intersex or hormonally different is a disability (quite the opposite, in fact), is it time that we offered an Olympics for competitors where gender isn’t clear-cut, in the same way that we have a Paralympics for differently abled athletes? This way there can’t be any suggestion that they’re somehow exploiting a physical advantage. Issues of gender have become far less taboo in recent years, allowing people to live exactly as they wish to without the previous levels of prejudice, which is great, although there is still a long way to go. Should be we accommodating people for whom gender/sex isn’t black and white? A ‘third-sex’ Olympics? It would certainly level the playing field, but is it getting into dangerous levels of classification and potential prejudice from different angles? Is submitting to hormone tests before being allowed to enter a step too far, or is it no different to submitting to a drugs test to ensure that performance-enhancing drugs aren’t used? Is it all just sour grapes from the losing athletes?

I’d love to know your thoughts on this, so please do leave me a comment below!