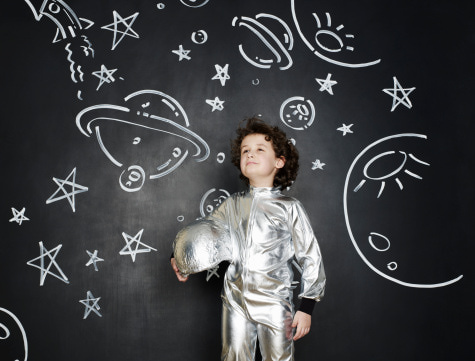 When I was a kid, I was often asked what I wanted to be when I was older. I was a relatively intelligent child and achieved well at school, so from a very young age there were a lot of expectations piled upon me from parents and teachers. Eventually, I passed my 11+ and was sent to a grammar school, where instead of being the brightest in my class, I was one of many clever girls and I hovered somewhere around the middle, in terms of achievement. It was drummed into us from the beginning that we had to constantly have our eye on the distance – end of year exam results dictated which GCSE options we were allowed to take, and we’d need to choose the right GCSE’s to allows us to take the A-Levels we wanted, which in turn were for the purpose of gaining access to the right degree course at the right university.

I was, and still am, a fairly shiftless person. My big dream when I was little was to be an Astronaut – sounds far fetched, but I intended to join the RAF out of sixth form and gain University sponsorship from them, with the hope of going on to train to be a pilot. Once I was told that I had zero chance of flying a plane because of my horrendous eyesight, I went into something of a tailspin. I could never really pinpoint what I wanted to be, and the thought that my career would define the rest of my life never sat well with me anyway.

I can’t help but wonder if my childhood intelligence (which, I have to say, seems considerably dulled by age) is part of the problem. I remember, for a long time, thinking that I’d be a hairdresser when I got older, except when I expressed this to my parents, I was told “You’re too clever to be a hairdresser”. This became a running theme in my adolescence and my passions were trampled under the weight of what I ‘should’ have been doing with my brain. Drama became my new passion and I was pretty good at it, too. I’m fairly extroverted and love performing but once again, it wasn’t considered cerebral enough. I was allowed to take Drama at A-Level, but only as a concession because I took four other ‘serious’ subjects (Chemistry, Biology, English Literature and English Language).

As it stands, I flunked out of sixth form; the mounting pressure got too much and I found myself being anywhere but the lessons I was supposed to be attending. I can’t help but wonder if I’d have been more inclined to attend if I’d not been steered towards subjects that I didn’t really want to take?

Sausage is an incredible kid, with a great imagination, huge intellect (she’s currently reading books at home which are for 8-year-olds, because her school books aren’t challenging enough) and artistic flair. She’s got the potential to be anything she wants to be, but I remind myself almost daily that the key part of that sentence is “SHE WANTS”. We spend so much time telling our kids that they can be anything they want to be and then second guessing their choices because they don’t sit well with our plans for their lives and it’s about time we stopped being so bloody arrogant.

Just this morning, Sausage told me that we wanted to be a nail technician and masseuse. One side of my brain said “That won’t earn you much money. You’ve got so much more potential than that. Why don’t you do that as a hobby, instead?”, but I managed to stop myself from saying it out loud. I adjusted my brain and instead thought “If that’s what makes you happy, then I’ll support you”. And, isn’t that what’s important? Supporting our kids in their choices and nurturing their happiness?

7 thoughts on “Nurturing Their Dreams”