I am a woman I have spent a lot of time in the company of other women. Let me demonstrate:

And that’s where I’m confused, dear readers. See, I’ve never seen extensive stashes of Femfresh or any other feminine washing products in the houses of my friends and family, but surely they MUST be using them if I’m not being overwhelmed by their ripe stench?

**If you haven’t realised so far that I’m writing with an enormous pinch of sarcasm, I suggest you stop reading now and go and read something which won’t offend the fluffy kittens that are currently taking up residence in your brain cavity** 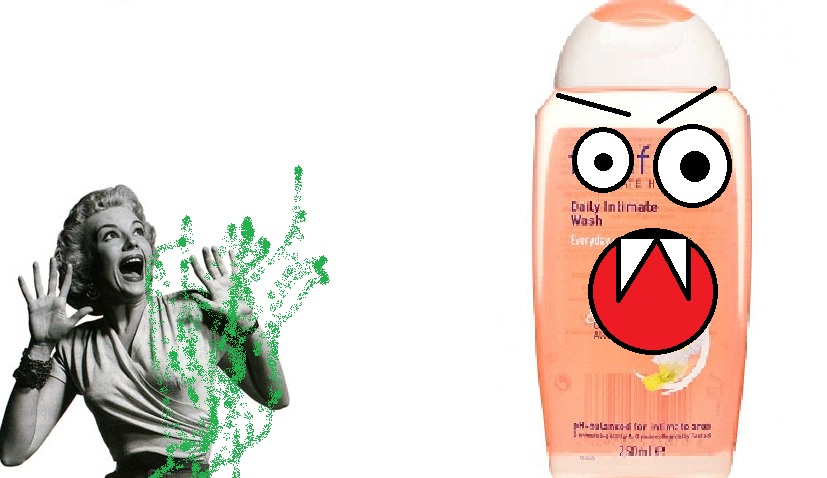 Femfresh is ridiculous. It’s a myth, peddled by companies to play on your paranoia and every time you buy one of their products, you’re perpetuating that myth. Have you ever been sitting around and thought “Wow, what’s that smell? Is it…my…fanny?!”? No? Okay, so if your nose, the nose which is presumably closest to your own foof on a daily basis, cannot smell your areas, the chances are that A.N.Other random passer-by isn’t going to be able to either. Unless they’re part bear. Bears have an amazing sense of smell, you know.

The thing that is really offensive about it all is the sheer range of products that Femfresh offer. Specialist “triple-action deodorising” fanny wash not strong enough to keep your olfactory-offender under control? Well, how about some handy portable wipes for keeping you fresh ‘on-the-go’? And if that’s not enough, there’s even a spray deodorant for your downstairs mix-up. With MOISTURISING SILK EXTRACTS, nonetheless. And finally, if you really cannot keep your quim under wraps, there’s a panty liner with ‘silver-care technology’ to really ensure you aren’t bothering anybody with your feminine effluvium.

The things is, men have privates too, but you don’t see supermarket shelves bulging with “Barry’s Patented Ball Wash” or boxes of silver-filled sheathes to encapsulate the bollocks, lest we ever catch a whiff of the breeze as it passes through their danglers. Sure, men probably wouldn’t buy ball-wash if it existed, choosing rather to embrace their manliness and let things marinate, but that’s not the point.

I would love, at this point, to make a cogent argument about how this is further proof of the demonisation of women and how we’re viewed as unclean and second-class, but this has gone on for too long and too many women have allowed themselves to be sucked in by this now. It’s become a vicious circle, we’ve played into the Ad-Man’s hands and made his job easy. We’ve run away with our paranoia and allowed ourselves to be manipulated. We don’t know right from wrong anymore. So, I’ll make it simple for women of all ages and backgrounds and end by saying this:

If your fanny is really that whiffy, GO AND SEE A DOCTOR. It’s not a specialist tuppence-wash you need, it’s medical attention and possibly some ointment.