It’s no help finding the perfect childcare center if it’s a few hours away. You need to find a childcare center close to where you live and work. Firstly, because it will save you many hours in traffic. Secondly, and most importantly, because it will allow you to reach the school quickly if there’s an emergency. Finally, this will allow you and your child to get used to the area and get to know people who live there. You should look at centers closest to you before searching for ones further out. For example, if you live in Sydney, start by looking at centers in Sydney.

Most parents agree that safety is the most important aspect of a childcare center. You might be wondering how exactly to know if a center is safe. Start by looking at the physical aspects: is there decent fencing? Are the playgrounds and classrooms child-proof? Then look at things like how they monitor who enters – do parents get keycards, or can anyone just walk in? Finally, if you know any parents whose kids are in that childcare center, talk to them about their experience. This is likely to get you the most accurate information.

Look, a childcare center doesn’t need a bunch of fancy, high-tech equipment and toys in order to teach your child. That being said, they should have a variety of methods of teaching, as children learn in different ways, and they require various methods of mental and physical stimulation. You can also ask them about field trips and what a normal daily schedule would look like so that you can ensure that your child is getting a well-rounded education. Also be sure to ask about what meals they serve each day – if possible, you should choose a center that offers nutritional meals.

Your child will spend a lot of time at their childcare center, meaning they will spend a lot of time with their teachers. It is therefore important to make sure that you trust them. Feel free to ask about their qualifications or experience. You can also ask them what they would do in a specific situation. The last thing you want is to reprimand your child for something, only to have them say, “But my teacher says it’s okay!”. A good teacher can make a huge, positive difference in your child’s life. Similarly, a bad teacher can have a severe negative impact.

It’s that time of year when everyone’s thoughts are turning to gifts for teachers, the angels who’ve dealt with our kids for the past ten months! Sausage always likes to do something totally different, which means that the standard ‘box of choc or bottle of wine’ are totally out of the question. Pinterest is our FRIEND! Something Sausage like the look of this year was a personalised name plate for her teacher’s desk, something like this: 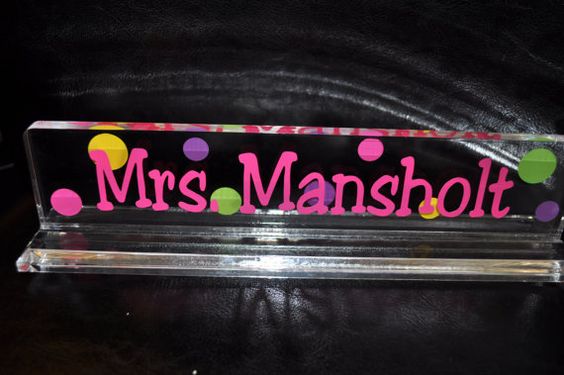 Always ones to share the wealth, we thought we’d give you a little guide to how something like this can be made cheaply and effectively.

And that’s it, it really is THAT simple! I have a lot of friends who are teachers and they all say that the gifts they love the most at the end of the year are the ones which are home made or personalised in some way. Don’t get me wrong, I’m sure they also love the odd bottle of wine and box of chocs, but there’s only SO much boozing and eating you can do in one summer!

Are you handmaking your child’s teacher gift this year? If so, I’d love to see what you’ve made or what you’re planning to make so either leave me a comment below of find me on Facebook and leave me a photo on the Mum’s the Word Facebook page. Thanks for reading!

It’s fair to say that Sausage’s school career has been fairly up and down. When she started Reception class she’d only been 4 for 3 weeks, being an August baby, which meant that although she was more than ready, academically speaking, the emotional side of starting school took a little longer to develop. She spent the first few months being absolutely distraught in the mornings and were it not for her Reception class teacher being fantastic and our want for her to socialise, I think we’d have seriously considered going back to our initial plan of homeschooling her.

Year One, however, was an unmitigated disaster. Due to various issues that I’ve never blogged about in any great detail, Sausage was completely unsupported by her class teacher and was placed into what amounted to remedial classes for no apparent reason. The problems seemed to start after we made a series of complaints about her teacher, firstly when Sausage came home telling us that she’d been being taught religious doctrine as fact; apparently a whole class of 5 and 6 years olds were taught that their teacher didn’t believe in evolution and that dinosaurs didn’t really exist. Religious education was being used as a contextual tool in other areas, such as literacy and numeracy and Sausage was coming home almost daily telling us she’d had another R.E. lesson.

The straw that broke the camels back was when Sausage came home telling us she’d been taken on a school trip out of grounds without our permission. Apparently they’d been taken around the local area on some sort of survey to do with counting types of houses/cars etc. but parents weren’t informed to begin with and when we dug further, we discovered that Sausage’s asthma medication hadn’t been taken with them, which meant that in the occurrence of an asthma attack, she’d have been completely without adequate care. The school tried to pass this off as a simple mistake, but Husband and I were absolutely beside ourselves with fury, and more importantly, absolute uncertainty that this woman was equipped to care for our child on a day-to-day basis.

It was only after we complained about this series of cock-ups that Sausage was suddenly considered to be academically behind and in need of being dragged back to levels she’d been learning at since before she even started school, so it seemed as though she was being punished and having proper levels of education withheld from her because we’d made life difficult for her teacher. In terms of education PR, it was pretty bad.

Her attendance was appalling because the anxiety of being under the care of her teacher was making her physically ill and her progress ground to a halt. Husband and I, to this day, are still trying to remedy the damage caused by this teacher and there are certain things which have marked Sausage indelibly, causing confidence issues which I think she’ll struggle to overcome for the foreseeable future.

Skip forward to Year Two and Husband and I could not be more grateful for her current class teacher. Nurturing and kind, whilst commanding the kids’ attention with masterful ease, Mrs. S. is every parent’s dream. Sausage’s thirst for knowledge has been truly reinvigorated and she’s been 100% invested in every class topic that she’s studied this year, whilst making HUGE leaps in terms of her reading level and comprehension (putting her back to where she should have been, had Year One not been such a trial for her).

One area that Sausage lacked confidence was maths; this was the subject in which, for some reason, her previous teacher had decided to place her into a special needs class, despite her actually being absolutely on par with her classmates in numeracy, and as a result Sausage became convinced that she was “no good” at maths and never would be. One afternoon before half term, I saw Mrs. S. whisper something to Sausage as she left the classroom and my beautiful girl came running over to me bearing a huge grin…”Mrs. S. told me to tell you that I got one of the highest marks in Year 2 for our practice Maths SATS, Mummy!”. Just for giving my girl her confidence back in this one area, I will be FOREVER grateful to Mrs. S. Obviously, Sausage deserves most of the credit for her hard work and perseverance, but a little support goes a LONG way with an uncertain 6 year old.

Yesterday, after being thrilled to go back after half term to see her beloved educator, Sausage said to me “Mummy, do you know I’ve only got 8 weeks left in Mrs. S’ class? I’ll never have another teacher like her, will I?”. Obviously I tried to reassure her that her next teacher could be just as good as Mrs. S., or possibly even better, but I have to admit that I’m not even convincing myself with that one. I hope her next teacher is as amazing as her current one, especially as she’ll be making the move from infants to juniors, where the emphasis will be less on play and even more on structured learning, but Husband and I will be keeping our eyes open for those telltale signs of a less-than-competent teacher in the coming school year.

All we can hope is that the confidence and re-discovered passion for learning that Mrs. S. has re-instilled in Sausage will carry her through and help her to deal with whatever Year 3 and the Juniors has in store. If you feel you have what it takes to be a teacher, or education in general – then Day Webster offers roles in education.