Once you get to my age, with two kids of your own, you’re pretty well versed in what is and isn’t useful to give to new parents as a gift. I’ve been through various things like nappy bins (I never really got the hang of our one, to be honest) and wipe warmers to know what I would never buy again, and also remember what was an absolute godsend when my two were little. With that in mind, here are a few suggetions that will definitely be a hit with new parents:

It doesn’t matter how many new vests and sleepsuits new parents buy ahead of their baby being born, once they arrive it will never seem enough. I don’t think there are many parents in the world who have bathed and changed their baby into clean clothes, only for a poo-nami or vomit volcano to erupt! Cute baby sleepsuits are always a winner and the range of neutrals for parets who don’t know the gender of their baby is MUCH greater nowadays.

In the past, lots of people would turn up with a freshly baked casserole or a stash of frozen meals to make new parents life easier. The modern version of this is buying them a gift card! Either find out their favourite takeaway or go for a delivery service like Just Eat or Deliveroo and have a voucher for a meal delivered. They’ll thank you for making their lives easier AND for making sure they’re getting a decent meal between feeds and nappy changes.

As with the baby grows and vests, another thing which new parents can never have enough of is muslins. They’re a fab multi-purpose item which can be used for wiping up spit-up, using as a shoulder guard when you’re burping baby, draping over you if you’re breastfeeding and want some privacy – there are even huge muslins which are made for swaddling baby.

When Sausage was a tiny baby, my Mum and Dad gave us a Braun in-ear thermometer, and we still use it to this day. It’s been an absolute godsend for over a decade and while some people may feel uncomfortable giving a gift which relates to potential illness, it’s genuinely one of the most useful, practical gifts we were given. A few years ago, we were gifted a newer, no-touch model which was fairly new tech at the time and after using it a few times, we actually gave it away and went back to our trusty in-ear model!

Although I didn’t breastfeed my two, having a large, v-shaped pillow was a huge help when it came to bottle feeding. I’d sit in an armchair and place the pillow on my lap with baby snuggled safely on top. It meant that my hands were both free for bottle holding and interacting, and we were both comfortable. It’s something that would be one of the first things I’d recommend to new parents, I think.

Okay, so you may have noticed that my 7-day slow cooker challenge didn’t exactly go to plan, in that I only managed to last for four days and my last three planned meals never quite made it onto my site. I think this happened for a couple of reasons – slow cooking, for me, is something I do to make my life more convenient, and forcing myself to use my slow cooker to a schedule just didn’t work. Also, one of the meals I planned was lasagne, and I’m not going to lie, I was really apprehensive about it. We LOVE lasagne in this house, but I always bake it the normal way, and attempting to slow cook it seemed a bit like fixing something which isn’t broken.

Anyway, I had a little slow cooker break after failing but I’m back to using it again today and it’s a super simple, super tasty beef and broccoli recipe that I’m making today: 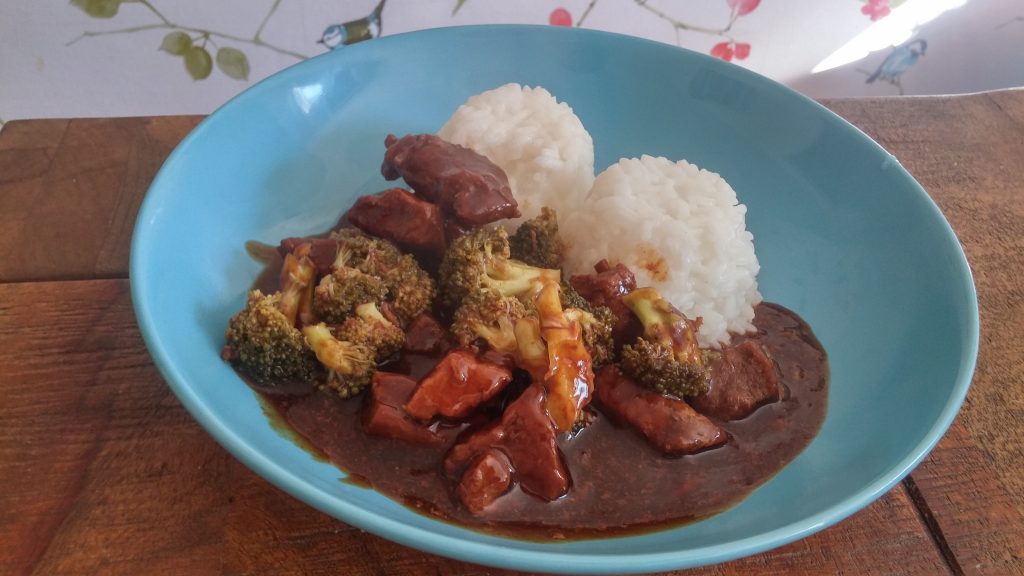 This was such a simple recipe but has turned out to be a real crowd-pleaser with the family. It’s exactly the kind of ‘chuck it all in’ recipe which makes me love slow cooking, and offered so much flavour for such an easy-to-make dish. The sauce was salty and savoury, and thickened to almost a gravy consistency once the cornstarch was added, and cooking the broccoli in the sauce added an amazing layer of flavour. The best part of this meal is that, when you factor in a portion of rice, it came in at just 453 calories per portion, which is amazingly low!

Beef is probably my favourite meat for slow cooking as you can buy the really cheap cuts but end up with a tender, flavourful dish which is low calorie, high protein and doesn’t cost the earth – basically the Holy Grail of cooking for a family! Let me know if you make this yourself, I’d love to know if you were as pleased with the results as we were.

Kids are out of school, and that surely means it’s a time for you to take a break of nine months of being a taxi driver for extracurricular activities or a school volunteer, right? Of course not. When summer break hits, you’re marching to a different rhythm—driving kids to and from summer camps, going on more daylong trips, or just scrambling to organize summer activity ideas to hold off kids from saying, “I’m bored!”
Basically, your kids may be getting a break from the summer, but your job has shifted to activities director—you are most likely just as busy as during the school year.
Good thing your slow cooker also doesn’t take a break either. This trusty appliance was most likely was your saving grace during the school year, cooking your family meal while you are gone all day and having it ready when you arrived home after work and picking up children. In the fall and winter months, a warm and hearty meal from the crock pot sure hit the spot after enduring brisk weather. Crockpots are great for cooking and keeping food warm on those winter days, but what about summer when a hot day calls for a cool drink or a crisp salad? Your slow cooker can cook up meals that are sure to hit the spot on summer months without you being stuck in the kitchen. Check out these crockpot tips to make summer cooking a little easier:
Barbeque
Summertime is all about cooking on the grill, but if you’re gone most of the day, firing up the grill for a quick meal may not always fit in your evening schedule. Luckily, there are many crockpot recipes that offer that summer barbeque taste without needing a grill. Many of these barbeque-like recipes simply involve marinating the meat in a sauce like mayonnaise, barbeque, or salad dressings.
For example, consider a recipe like Crock Pot Caesar Chicken: simply place four boneless, skinless chicken breasts in the crockpot, and set the crockpot on either high for three hours or low for six hours. After cooking the chicken for either three or six hours in the crockpot, drain the juices from the crockpot, keeping the chicken inside. Pour a bottle of Caesar salad dressing like Just Caesar from hampton creek on top of the chicken. Cover the crockpot and set it on high for 30 minutes. Top off with parmesan cheese and cut it up to serve with a salad or as a chicken salad.
The difference in Hampton Creek salad dressings and sauces is that they are made with minimal artificial additives and free of gluten, dairy, and soy. The company has other sauces like Just Mayo, an eggless mayonnaise, that you can use in other crockpot recipes that call for mayonnaise. Try replacing any crockpot recipe with a sauce or salad dressing from Hampton Creek.
Vegetables
Summer BBQ isn’t complete without a side of vegetables, especially corn on the cob. Corn is often boiled in a pot or cooked on the grill, but you can prepare corn on the cob ahead of time in a slow cooker so you have it ready when you get home.  One version of crockpot corn requires that you prep each ear of corn with garlic butter, pepper, salt, and wrap each ear with a slice of bacon. Place the ears of corn in a crockpot with chicken broth and minced jalapeno pepper. Cook on low for up to four hours.
Soup
Just because it’s summer doesn’t mean that you can’t eat soup. Soups are often thought of as hearty meals meant to warm you up after a cold day, but there are just as many soups that are light and flavorful, making it a perfect dish to enjoy on a hot summer day. It’s also a fun way to incorporate fresh vegetables from farmer’s markets, which most of the time are held during the warm months. A summer vegetable soup like a summer vegetable pesto soup makes use of summer vegetables like sweet corn, green beans, tomatoes, and more, and tops it off with pesto. You can also add other vegetables like white beans for a different flavor.
Summer break from school doesn’t mean that parents also get a break, but summer crockpot recipes give you a break from the kitchen so you can spend your summer days doing what you want—going to the pool, attending the county fair, relaxing at the beach—without the worry of what you’re going to eat for dinner.