Unless you’re already completely loaded, you’re probably like me and spend a fair amout of time thinking about what you’d do if you won the lottery. Aside from the obvious ones of buying a house and going on holiday, there are a few things that I’d love to do and so I thought it would be fun to share a few of them with you today:

Husband and I absolutely LOVE the idea of buying a new motorhome and spending time travelling around, seeing the UK and Europe. We’ve spent many an hour online looking at everything from top of the line Winnebagos to old converted school buses that people have made into the most incredible mobile homes and it’s something that would be really high on our list, should we win the lottery.

I wrote a blog post a few years back about how “saving the world” seems to be reserved for the middle and upper classes, as they’re the ones who can afford to buy greener cars, install solar arrays etc. and I still feel that this is relevant now. We’re currently using my Dad’s car while we’re saving to buy our own, but it’s unlikely to be an eco-friendly electric model, so if we won some money I’d definitely be investing in an electric car.

This one might sound absolutely bonkers, but I’ve always had a thing about houses in trees! I don’t know if I’d want to live in one full-time, but if we had a big house with a decent bit of land and some big trees, I’d definitely get someone to come in and build us a super treehouse for fun camp outs and even to have family over to stay in!

Bear with me here, again, I know this sounds strange! I’ve been in the process of writing a children’s book for a couple of years now and once I finish, I’m hoping to get it in front of the right people to get it published. However, if I had the money, I think I’d skip this step altogether and just self-publish and distribute it without a third party. It would be a lot easier and I wouldn’t have to deal with the inevitable rejections from editors!

I started my OU degree back when Sausage was a toddler but between life getting busier and tuition fees TRIPLING since I started, it’s been well and truly shoved onto the back burner. If I have the money, I’d start some sort of course just for the fun of learning. We all focus on education being a gateway to a career, but wouldn’t it be nice to just pick something you’re interested in and learn all about it?

What would you buy if money was no object after a lottery win? Leave me a comment below, I’d love to hear your ideas.

It takes a huge stroke of luck to win the lottery, but every once in a while, people get the chance to experience such immensely fortunate events. In this article, we are going to tell you about five amazing mothers who have used their lottery fortunes to provide their families with the happily ever after they had always envisioned for them. 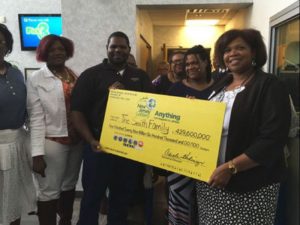 Pearlie Smith is the proud mother of seven, and as you can imagine, it has not always been easy for her to provide her children with the best things in life. One night, Pearlie had an amazing dream about the winning numbers for the lottery.

She had played the lottery several times before, but she had never won. Nonetheless, she decided to play the numbers she had dreamt in the US Powerball, and this turned out to be the best decision she ever took because she won a whopping $429.6 million. With such an impressive fortune, the Smiths will never have financial troubles ever again. 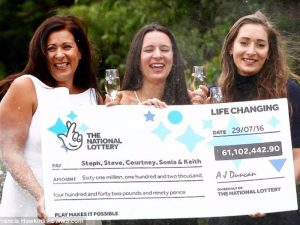 Sonia Davies, 53, underwent surgery for a parathyroid tumor and much to her surprise, she lived to tell the story. When the doctors told her that the operation had cured her completely, she felt absolutely invincible, so she realized it is the best possible time to play the lottery.

Sonia, who was in Florida at the time, called up her daughter in Wales, and she insisted that she buy a ticket for the EuroMillions. And it seems Sonia’s intuition served her well because they won no less than £61.1 million. Sonia and her daughter decided to share their lottery fortune with the entire family, thus providing them with a chance at a stellar future. 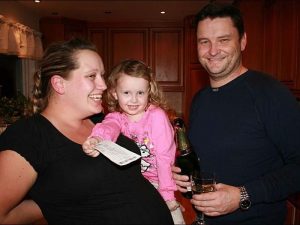 Hege Jeanette Oskens seems to have an almost mythical connection to the lottery. Every time she gave birth to one of her children, a lottery win followed in her family. And since Hege is the happy mother of three, the Oskens’ have three lottery wins in their family.

Hege’s father won 4.2 million crowns in the Norwegian National Lottery the following day after she gave birth to her first child. Then, Hege herself won 8.2 million crowns and two days later, her second child came. The latest win in the Oskens family was this year when Hege’s brother won 12.2 million about a month after she had her third child. It remains to be seen if the Oskens’ lottery adventure still has some lotto fortunes to come. 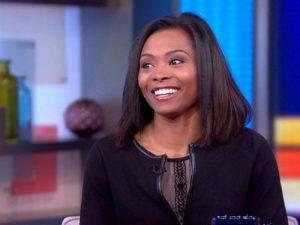 Marie Holmes is the single mother of four, and all of her life she had struggled to sustain her family. She had worked two jobs to make ends meet, but she never stopped hoping that her life would change, which is why she bought Powerball tickets on a regular basis.

One day, her lottery hobby brought her a massive $188 million Powerball jackpot, so now she never has to worry about providing for her children ever again. Marie decided that not only her children, but the rest of her family as well, would get education funds so that they would have all the chances at a stellar future. 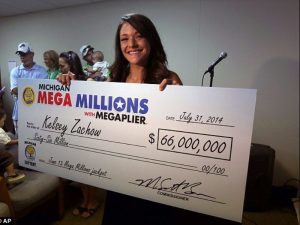 Kelsey Zachow is yet another single mother who struggled to provide for her family. But, like Marie Holmes, Kelsey played the lottery and hoped that it will make her future brighter. She got her big lottery break on a Friday, the 13th, and she won a staggering $66 million in the Mega Millions lottery.

Kelsey also set up college funds for her entire family and aimed to use her lotto fortune to provide her children with the best things in life. The 24-year-old proved to be extremely mature and put her millions to great use, not only for her, but for the whole family.

These lotto moms have some amazing stories, but it is their dedication to their families that we admire the most. So, never stop believing that things can truly get better and maybe even put in the occasional lottery ticket because you may get a lottery story of your very own. When people think about winning the lottery, they imagine that such a windfall will be an instant fix for all of their problems and that it will enable them to turn every single one of their dreams into reality in a blink of an eye. However, the reality of being a lottery winner is not exactly in line with the monumental expectations that people have from it. Without any shadow of a doubt, winning a lottery jackpot is nothing short of amazing, but players should be aware of all the aspects surrounding this huge stroke of lottery luck. In this article, we will tell you about the positive points of being a winner, as well as the negative ones so that you can get a complete idea on the matter. When buying a ticket to your favourite lottery, you build up dreams; but the reality of a win might prove overwhelming.

Winning the lottery is one of the best possible things that can happen to any of us and the few that have actually gotten to experience that have all said that the initial enthusiasm is positively overwhelming. What would you do with a million dollars? What about two, or ten, or one hundred? What do you do if you had more money than you could spend in an entire lifetime?

The first things that come to the mind of the winners are the fact that they will never have to depend on a job ever again and that all of their pre-existing debts can magically be sponged off into oblivion. This is a very relaxing and encouraging thought that causes an instant burst of massive enthusiasm that makes them feel like they could do absolutely anything.

“We couldn’t believe our luck when we realized that we had matched all seven numbers, we had to pinch ourselves.”, said Dave and Angela Dawes about their £101,000,000 win in the EuroMillions lottery. Dave announced his immediate retirement during the lottery win press conference and then the couple started planning the extravagant wedding they had always dreamt of.

From fancy sports cars to luxurious vacations and all the things that money can buy, getting your hands on a lottery jackpot can put virtually any material desire within your reach. As such, splurging on those millions can be a very exciting ride. In fact, it is possibly the best part about winning the lottery because it makes anything you’ve ever wished for achievable with no effort at all.

While most lottery winners spend their money on luxury items and glitzy gadgets, some have taken this to the next level. Some of the most outrageous purchases include TV shows, weather stations, and even land on the Moon, because lottery jackpots seem limitless.

It is essential that this remains only a passing phase because turning it into a lifestyle can prove disastrous to even the biggest of lottery winners. Quite a few people who have won enormous lottery jackpots have ended up spending their money on an unsustainable luxury lifestyle, which rendered them bankrupt before they got a chance to realize it.

Putting the Money to Good Use

While most lottery prizes can provide a very comfortable lifestyle for their winners for the rest of their lives, getting used to first-class living can prove to be much more expensive than it appears initially. Even the largest jackpots will eventually run out if the winners do not have a long-term plan for their newly-found fortune.

This is the main reason why it is crucial that lottery winners seek financial guidance from a professional who can help them develop this long-term plan that could ensure that they are able to maintain their wealth. Investing part of the money wisely can lead to thriving business projects that will make winners feel fulfilled and provide them with a solid financial reassurance.

Getting Used To A New Social Status

Winning the lottery will undoubtedly change a person’s lifestyle and with this, it will bring about a brand new social environment. Winners should expect to receive countless requests for financial support not only from friends and family, but also from strangers.

This is bound to have a significant effect on the psychological status of winners because the vast majority of these requests will be dramatic and even aggressive. Winner’s guilt is almost an inevitable stage, which is why it is highly recommendable that lottery winners see a psychologist while they go through all the changes that come with overnight wealth.

All in all, winning the lottery can prove to be quite the modern fairytale it appears to be, as long as the winners remain grounded and take the time to develop a plan for their future. By keeping these essential guidelines in mind, they can use their money to fuel the best possible version of their lives and make all the plans that they have envisioned for themselves come true.