If you follow me on any social media, you’ll probably know that poor Sausage has been off school all week with tonsillitis. Every time we think she’s on the mend and ready to go back to school, she seems to get all run-down again, like today when she woke up with a stinking cold on top of it all. She’s feeling pretty droopy, so when a parcel arrived just for her yesterday, the timing couldn’t have been better. She’s had the Disney Princess Palace Pets app on Daddy’s iPad for a while now and she adores the game, which is basically a virtual grooming shop for all of the pets belonging to the various Disney Princesses, and the toys we were sent to review accompany the app. 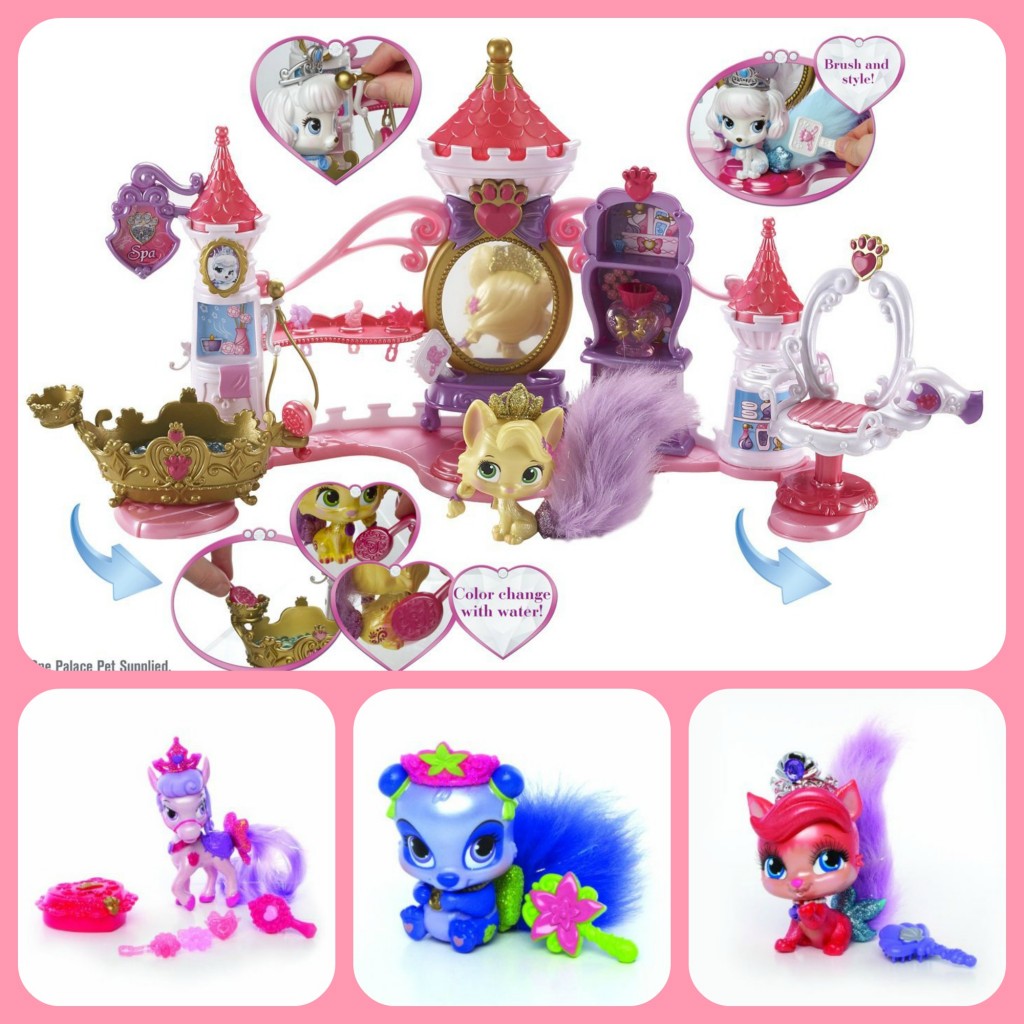 The main Disney Princess Palace Pets Pamper and Beauty Salon Play Set retails for around £33 and contains one Palace Pet (in this case it was Summer, a cat belonging to Rapunzel), and gives you a place to sit your animals while they’re being preened and pampered, as well as coming with various hair clips and brushes which can be used on tails and manes. We were also sent Blossom, Mulan’s Panda, Bloom, Aurora’s pony, and Treasure, a singing pussy cat who belongs to Ariel.

Sausage was absolutely over the moon with all of the toys, which seemed really true to the animations within the app (she immediately recognised Blossom as we pulled her out of the box!) and she’s been playing with it all pretty much ever since. All of the toys feel high quality and well made, although some of the parts are absolutely tiny, so I wouldn’t give them to smaller kids or those prone to putting things in mouths or up noses!

I like the fact that there are lots of different pets available, so if your child has a favourite princess you can buy the corresponding animal. The talking and singing cat is slightly larger than the other pets and as such retails for a slightly higher price (around £12.99, compared with around £5.99 for the smaller, non-talking pets) but I think all of the prices seem quite fair, given that it all feels sturdy and like it would last a while. This is definitely the sort of playset that I can see us putting away when Sausage has outgrown it, and passing it onto the baby shen she’s old enough for such toys.

This would make a great gift for any child who loves their Disney Princesses and it’s genuinely cheered my little lady up in a week which has been pretty miserable for her.

Recently, we were asked to download and review Mini Pupstars, the interactive iPad app for kids. The name alone was enough to let me know that it would definitely be worth a look for my animal-crazy five year old, so this weekend we set about finding our way around the app. These videos show you what it’s all about:

The app, which is basically a virtual dog grooming parlour, allows kids to give their chosen Pup a trim, shave, shower, wash, blowdry and add numerous colours and accessories to them to make a new and glamorous Pupstar each time. They can then photograph their preened pooch and add them to their gallery. There are three dogs to choose from and it’s completely ad-free and doesn’t feature any in-app purchases, which is really important to me as a parent.

Sausage took to the game right away; she’s a very tech savvy kid but she literally picked the iPad up and started playing, with no instructions needed, which tells me that it’s very user friendly. The app is aimed at kids aged 5 and over, so Sausage is the prime age for this app, but I also think she’d have been more than capable of using it a year or two ago, too.

She’s spent probably about 2 hours playing the game on and off over the course of the weekend and she’s really enjoyed all of it. There are no ‘wrong turns’ in the game, so she hasn’t needed help to go through the menus or work out what she’s doing and the fact that you can take snaps of your dog from within the app means she doesn’t have to agonising over losing all of her work whenever she’s ready to create a new pooch. 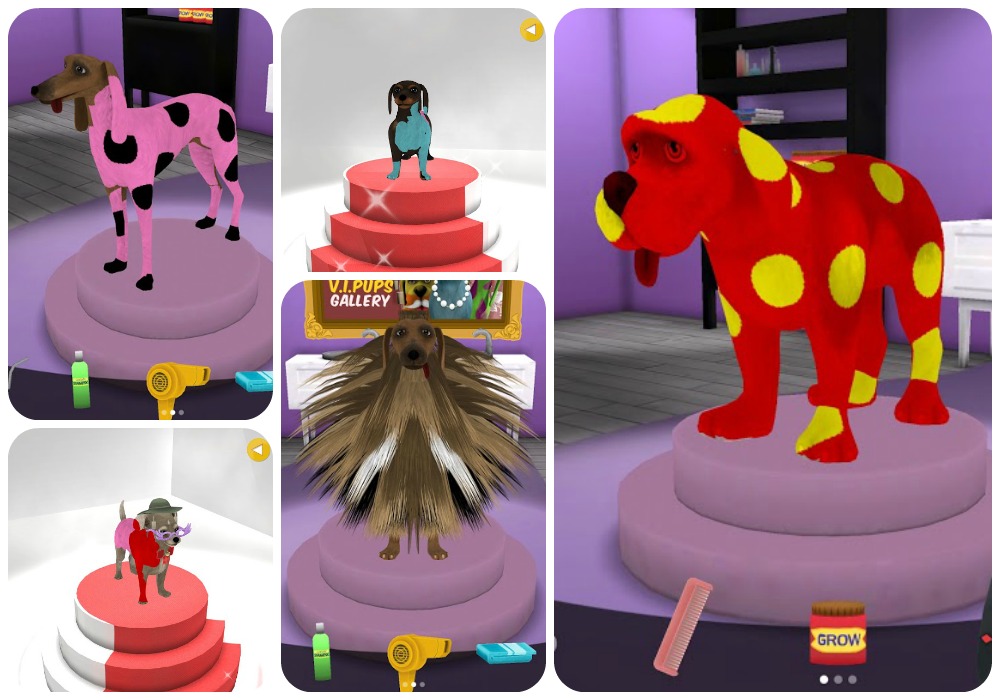 Both Husband and I have sat with Sausage while she’s been playing and here’s what he and Sausage had to say about it:

“I liked the spray can and I like the hats and necklaces for the dogs. I thought the app was interesting and fun!” – Sausage, age 5

“The app looks quite enjoyable, novel and fun for kids. The accuracy could do with some improvement when using the tools, but it’s still a good kids app” – Husband

All in all, we really liked the Pupstars app. I like the fact that it brings out the creativity in kids in a fun and engaging way and the user interface is super easy to get to grips with.

It would be nice to see more breeds of dog and more customisation options available in the next update, but overall it’s definitely a good app for both boys and girls alike and we’d all recommend it highly. 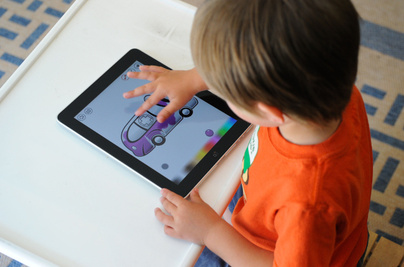 I was at the hospital yesterday, waiting for an appointment and whilst in the busy waiting room, I overheard a conversation. There were several mums with their kids and one child was happily playing on an iPad whilst his mum waited for her appointment, whilst another boy of about 8 was looking on with interest. At this point, I got called into a sub-waiting area, but about five minutes later the mum and child without the iPad got called through to where I was sitting (bear with me, this is going somewhere…)

As they walked through, the boy was asking his Mum if he could play on her phone, seeing as he didn’t have an iPad to play with, and she turned to him and said “Don’t be ridiculous, stop asking for my phone, YOU don’t need to stare at an electronic device to keep you entertained, I raised you better than that!”.

I was quite shocked by her reaction (shocked enough to put the phone that I’d been contentedly engrossed in, whiling away the wait with a few games of ‘Where’s my Water’), but her words really got me thinking; is a child’s need for entertainment really about their upbringing? And why are electronic devices frowned upon?

I’m well aware that there’s an obesity epidemic in children that people claim to have been directly related to time spent playing computer games, but with children able to play outside less and less, is it really that much of a surprise that they look for entertainment elsewhere? And surely it’s not about the devices themselves, but the parental moderation involved?

Sausage owns a Nexus 7, a Chromebook, a Nintendo DS and Wii, an Xbox, an iPod Touch…but despite that, she doesn’t spend all of her time glued to a device because we simply wouldn’t allow it. I can’t stand the implication that once we give our kids consoles or gadgets, we relinquish all control over how they spend their time, or their wellbeing. Nor can I abide the assumption from a small amount of parents who feel like giving kids something with a screen is a substitute for parenting.

The other thing that bothered me about what the mum said was that if you need entertainment during down-time, you must’ve been raised badly. Surely the need for entertainment is a trait that’s shared by all humans? Of course, the type of entertainment varies from person to person…I love to read and blog, others watch TV, others play an instrument, others play games. There’s no right way to be entertained, but surely training a child to sit quietly with their hands in their laps instead of stimulating their brain in some way is limiting them? There’s a lot to be said for quiet contemplation, but I can’t get my head around the thought that a bored kid is a bad kid. It just doesn’t compute.

The real irony of the situation is that after that comment, the mum in question checked her phone no less than a dozen times in the period that we were sitting in that area, completely negating her own argument. Obviously, her comments got my back up on a personal level, seeing as I was sitting there on my phone at the exact moment she said it, but the urge to ask her if she’d also been raised badly after the 10th time of staring at her screen did get rather overwhelming!

The flipside of this is that, in my humble opinion, limiting a child’s access to computing is setting them back, in this day and age. We live in a world where computers are everything, and kids who aren’t highly computer literate are simply going to fall behind. Given that we now teach elementary coding in Primary Schools, we should be giving our kids more screen time in the hope that computer literacy is second nature, not something that’s like pulling teeth, which is how it seems to be for older generations for whom computers simply didn’t exist when they were young enough to soak things up like a sponge.

Aside from all of that, gaming needn’t be mindless – there are myriad apps and games out there which encourage literacy, numeracy, fine motor skills, languages and so much more. We’re happy for these things to be taught in schools, so surely we should embrace anything that broadens our children’s minds?

What do you think? Do your kids have electronic devices? Do you think that a child’s need for entertainment means that they haven’t been raised correctly? Leave me a comment below.