So, according to various news outlets, 139 people were so offended by the sight of Holly Willoghby in a bit of a boobie dress that they complained to the BBC after watching Saturday’s episode of The Voice. 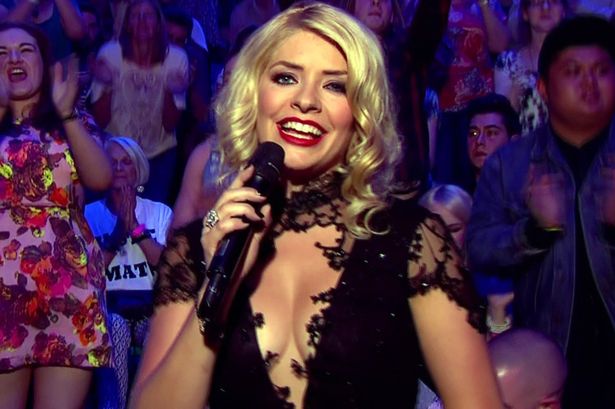 ONE HUNDRED AND THIRTY NINE of our Great British brothers and sisters are so incensed by the space between a woman’s boobs, that they dragged their carcasses out of their armchairs, took to pen or keyboard or carrier pigeon and sent a complaint to Aunty.

Let’s just let the utter ridiculousness of that sink in before we go on.

Okay, so our Holly is a big girl for her Mum in the chesticles area. She’s got a lot of front. And yes, I will concede that the dress was revealing. But to actually complain about it? The sight of about 100cm2 of flesh concerned these people that much? The same society that barely raises an eyebrow when the captain of our national football team impregnates a teammates girlfriend (“That’s alright, John, we’ll still let you REPRESENT OUR COUNTRY”). The same society which watches halfwits in a state of constant foreplay on Big Brother, the dead horse which various channels have been flogging for 13-odd years. The same society which embraces shows like Eastenders (and lets their kids watch it, no less) which shows scenes of rape, people trafficking, infant death and more besides on Christmas Day. I’m not even going to plunge into the plethora of other places that your kid can see boobs if they want to…

GET A FUCKING GRIP, PEOPLE.

But do you know what’s worse? The BBC actually apologised to these people!

Willoghby’s cleavage is not going to corrupt your children. You should be more worried about your own overblown sense of moral outrage having a negative effect on them than a pair of tits.

On a serious note, this does bother me in other ways. Saying that her dress is a problem to you is a very short step away from the victim-blaming bullshit that we’re so used to.

“She was asking for it, in a dress like that”

“I couldn’t control myself because of what she was wearing”

If her dress, her cleavage, the human, nay WOMANLY form, bothers you to the extent that you need to moan to the BBC about it, I think you need to seriously assess what it is that you find so offensive about it. The human form is nothing to be ashamed of.

I’d love your opinion on this – am I being a bad parent for not shielding my daughter from the space between Holly Willoughby’s ta-tas?

Am I completely missing the point on this one?