One thing that Husband and I are really adamant about is that kids should be allowed to have opinions and preferences, and should be given the time and space to express themselves exactly as they’d like to. A few weeks ago, Sausage made a passing comment about how cool it would be if she was allowed to have pink hair and after a little bit of discussion between Husband and I we told her that we had no major objections…and then this happened: 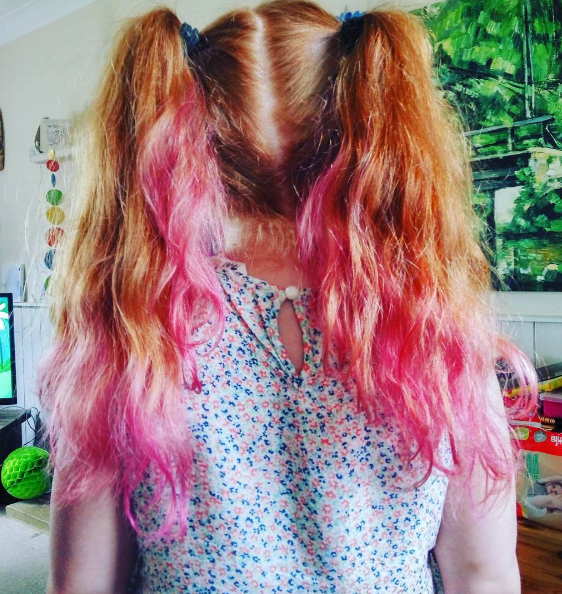 It’s a dip-dye which means that it’s easy enough to trim the bottom few inches of her hair off once she’s back to the daily grind, and it’s made her feel really special and grown-up, being allowed to have such wacky hair!

By the same token, we think that kids should have a say in their surroundings too. I’m not talking about letting them choose the wallpaper for the living room, but their own bedroms should be a place where they feel a bit of ownership, which is why I love the new project by Dulux, getting kids involved in the design on of their rooms. The Dulux Kids’ Bedroom Summer Holiday Workbook is a downloadable .pdf which allows kids to gather and record their colour preferences, inspirations and input into the design of their own rooms, so that Mum and Dad can create a space which the kids feel truly connected to.

Dulux have conducted a load of research which shows that kids really value being part of the decorating process:

An overwhelming majority of kids (92%) would spend more time playing in their room and doing their homework if they have a say in how it’s decorated.

Research commissioned by leading paint brand Dulux found a whopping number of children value being part of the decorating process, with the majority saying it was the second most important thing they had ever done – even more important to them than their first day at school or losing their first tooth.

The study of 2,000 families shows that children also found decorating with their parents a really positive experience, with 65 per cent saying they felt happy and 58 per cent excited at the prospect of helping mum and dad.

Additionally, parents commented that decorating together helped to increase their child’s sense of ownership, pride and opportunity for creative expression. Some parents said it even ensured rooms were tidier, because they wanted to show it off to their friends and family.

Surprisingly, however, whilst an indisputable 92 per cent of parents believe that decorating their child’s room is important, the study found that only a QUARTER of parents actually consulted their kids or involved them in the process.

Dulux offers a whole range of paints which are perfect for decorating a kids’ room – Dulux’s Endurance+ range is the perfect paint for a kid’s bedroom makeover – it’s 20 times stronger than normal emulsion, so when you’re tackling sticky fingers and mucky paws it’s a great solution, allowing you to wipe away the stain and not the paint underneath, meaning your walls stay as fresh as the day you painted them!

We’ll definitely be using the Dulux workbook when we get around to decorating the girls’ room and I can’t wait to see what crazy ideas they come up with. They’re sharing a room at the moment but have very distinct little personalities, so there’s a good chance we’ll end up with a room completely split down the middle, with one colour on one side and a completely different colour on the other! We’ll be sure to share the results with you when it happens.

For more info on Dulux and their ranges, you can tweet them on Twitter using their handle, @DuluxUK plus the hashtag #KidsBedroom