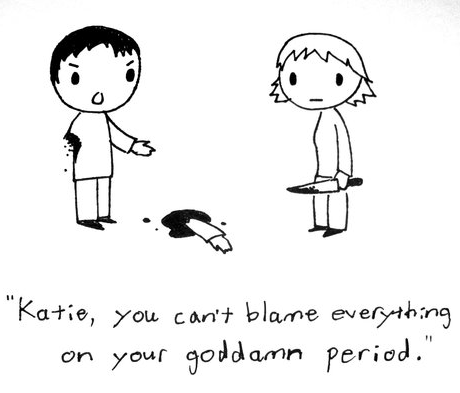 Ever since I was about 9 years old, I’ve been a slave to my hormones. Every month I’d get that feeling of irrationality creeping in and making me react in ways that were far less reasonable than I would normally be. Sometimes, I’d know it was happening; like an out of body experience, I’d watch myself being aggressive and over-sensitive. Other times, I’d know fully well that I was acting differently and I didn’t care. I suffered physically too and I was diagnosed with PCOS at the age of about 14, which accounted for the pain and other issues that I suffered.

When I was 16, I went on the pill. I had a boyfriend and it was a no-brainer, serving as protection and helping to regulate things that had been so irregular in the past. Trouble was, it gave me hideous migraines, so I started having a Depo injection, which was far from perfect and I put on a ton of weight.

Over the years, I’ve tried every type of contraception there is, and after Sausage was born, I had an implant fitted. It wasn’t immediately perfect but after the first three months, everything stopped. And I mean everything. I didn’t feel the monthly struggle with irrationality and although towards the end I got a bit of pain at a certain time of the month, it worked. Trouble is, implants don’t last forever and I had it removed a couple of months ago. I didn’t have it replaced because we may decide to try for another child and I don’t want to either wait another 3 years or potentially have to have another surgical procedure to have it removed. So, I’m going contraceptive-commando at the moment, which is fine, except that I can feel the hormones creeping up on me again.

Poor Husband, I can fully admit that I’m not a picnic to live with. I can be over-sensitive at the best of times, but when you chuck raging hormones into the mix…well, he must have a halo hidden somewhere in his desk drawer! I’m like a stroppy teenager when I get going.

I’ve decided to take a stand.

I’m not going to be a slave to my hormones any more. I’m taking control and employing a level of self-awareness to overcome my irrationality. I’m not saying that I’m going to be successful 100% of the time, but I’m an adult with a brain and I refuse to allow myself to act and feel badly when there’s something I can do about it. Whenever I feel myself starting to slip into that place where I snap, over-react and generally escalate every conversation to a point of confrontation and aggression, I’m setting an internal bell to ring to remind me to reel myself in.

I’m not trying to betray the sisterhood. There’s no denying that being bloated and in pain, with the added injection of crazy-making hormones can make you feel lousy and PMT is a genuine medical condition with real symptoms. And, do you know what? Sometime’s it’s NOT PMT, sometimes the person you’re snapping at just is a douchebag, regardless of where you are in your cycle! But I’ve allowed my mood swings to rule my life for too long and I have to try to take control for my own sanity and the sake of those who have to live with me.

So, sistaz, how do you cope with the monthly black cloud? I’m guessing copious amounts of crisps and chocolate aren’t a cure otherwise I’d be an angel every month. What do you do when PMT rears its ugly head?

(ON a slightly different note, do you know how hard is was to find a PMT-related illustration for this post that wasn’t MASSIVELY patronising/sexist/offensive? What the frick, dudes of the world? What the frick?)

If you read this blog regularly or follow me on Twitter, you’ll know that I’m a pretty ‘heart-on-sleeve’ kinda gal. There are very few subjects that I won’t write about; the way I see it – my space, my rules. I’ve always been the same and those close to me have often remarked that they worry my openness will leave me vulnerable as not everyone in the world is nice. The thing is, try as I might, I can’t help myself. It’s no coincidence that my Mum called me ‘Gob on a Stick’ when I was a kid!

However, just recently, there have been some things that I can’t gab about, either to readers or Real Life Friends, and it’s making me feel peculiar.

I’ve written before about how superstitious I am and how at times it’s felt like it’s taking over my life, walking along the street by myself, avoiding the cracks and saluting the magpies, but at the moment I’m under the curse of the jinx. There are things going on, both good and bad, and if I talk about them I might jinx them. I know how stupid that sounds, like by mentioning something I’m going to somehow change the course of future events, but it’s just the way my mind works. There’s logic in there somewhere – if I DON’T talk about it and anything goes wrong, I know I didn’t jinx it by talking about it, does that make any sense?

The problem with this is that I feel like I’m holding my breath. I’ve taken a deep breath in and I have no idea when I’m going to be able to exhale again. It’s a frustrating feeling that I don’t like very much. As a control freak, it’s not all that conducive to my usual way of doing things, you know? The stuff that’s going on is only partially in my control and it’s not that great for my frame of mind.

All I know is, once this week is over, I’ll know where I stand a little bit more and hopefully things will start to fall into our new version of normal. But until then, if you only get one-word answers out of me, don’t be too surprised!