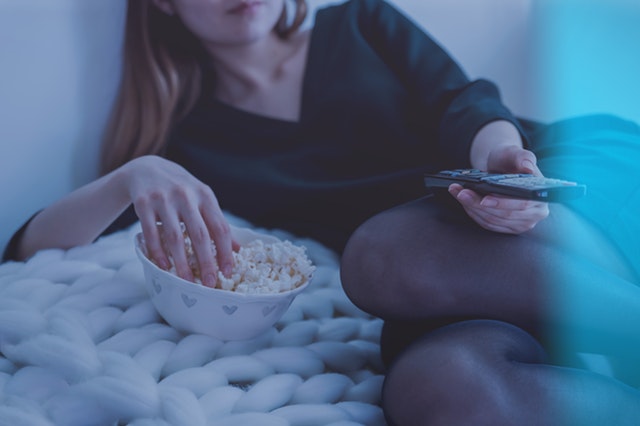 As a TV show enthusiast, I have all sorts of favourites. I am not picky on what era a show is from and if it is really good, I have found myself watching, and then re-watching TV shows later on while diving further into the story and character development. I will be patient and give a show a couple of episodes to pick up, but there have certainly been a number of shows that have had me hooked by episode 1.

Here are 3 of those TV shows that will catch your interest quickly and keep you hooked. Plus, an added bonus, all 3 are available on a new platform called Chili and are ready to be binge-watched.

“The Night Of” is a 2016 American crime drama miniseries with 8 episodes. It is based on the first season of BBC’s “Criminal Justice”, following the story of a New York City murder case. Riz Ahmed plays Nasir ‘Naz’ Khan, Bill Camp as Dennis Box, Payman Maadi as Salim Khan to name a couple of the main characters. After Naz, a Pakistani-American student, meets a woman and spends a night of partying with her, he wakes up to find her stabbed to death beside him. He is charged with her murder. The miniseries takes you on a psychological tour of the characters, portrays different cultures in distinct presentation and tells a story that goes beyond standard storytelling.

“Big Little Lies” has a strong following, and for good reason. It debuted on HBO in February 2017. “Big Little Lies” is set in Monterey, California and follows narration from the viewpoints of three women, Madeline, Celeste and Jane, portrayed by stars Reese Witherspoon, Nicole Kidman and Shailene Woodley respectively. Each of them are mothers of first graders, and each have their own demons they are battling in their home life while trying to keep up the face that they show the rest of the world. It being downright relatable and powerful has undoubtedly drawn an audience. “Big Little Lies” shows real problems that real people face. The plot includes heavy topics, such as domestic violence, abuse, murder and infidelity. The show demonstrates the strength gathered from these women supporting themselves and one another, something that will have you rooting for the characters along their drama-filled journey.

The TV show “Sharp Objects” is based on the novel Sharp Objects by Gillian Flynn, the author of the ever popular book Gone Girl. “Sharp Objects” follows Camille Preaker, a reporter in St. Louis portrayed by Amy Adams, who returns to her hometown to investigate the kidnapping and murder of two local girls. The show carries you between Camille’s internal thoughts and drifting mind to how she carries the investigation externally. Camille’s character might be monotone, but between Amy Adams’ performance and the beautiful editing of the show, you feel like you really feel what she does.

Do you have any TV show recommendations? What are some of your favourites?

In many households of today television is a welcome family member, even a dominant once. We build our evenings around our favourite television shows and all sit together and watch it. Some people even have it running on in the background in the living room for the entire day. We eat in front of it, we nap in front of it and we let our kids play in front of it. But who are we actually letting into our house each day?

It should be a known fact that the majority of television advertising time is held by a small number of the wealthiest corporations. Many billions per year are spent to ensure that certain business products and advertising messages get included into the broadcast. Producers and creatives of the entertainment industry always have to compromise and include some product into their content. Television has become a private medium designed to promote certain products and behavioural models and it does so successfully in the majority of our homes. 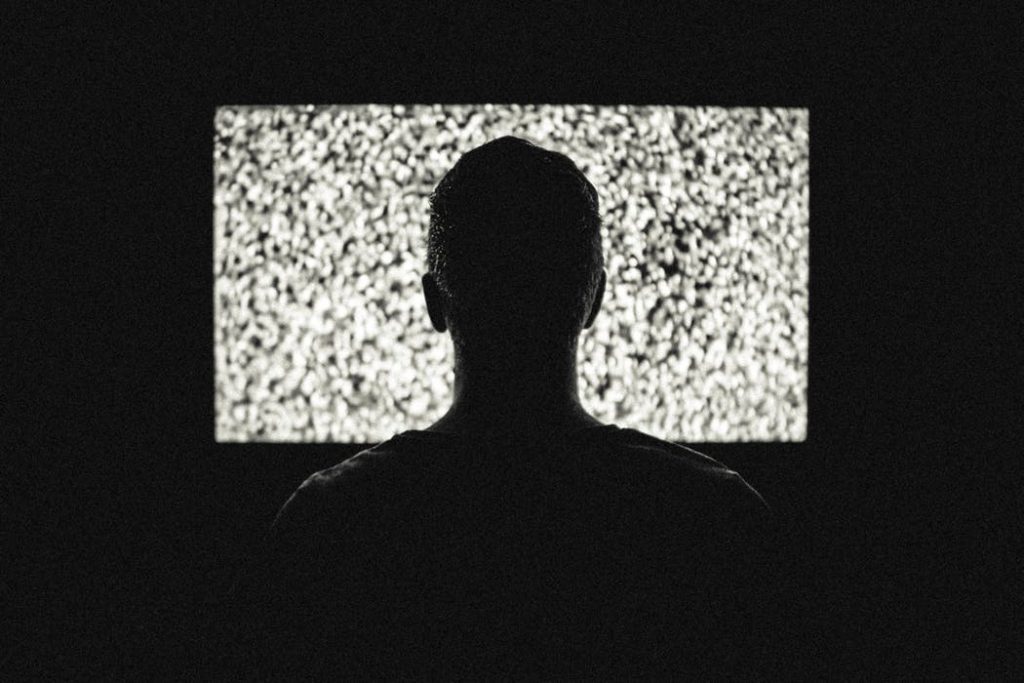 Beware of the Viewer Passivity

Television is extremely influential especially because it relaxes the consumer first. You are put into a repetitive and unfocused state where you are susceptible to different stimuli. Those messages are usually incorporated into just a fraction of second. They are just below the threshold your conscious mind can detect. They can be visual or auditive patterns designed to affect your subconscious mind. You are supposed to sit patiently in front of your TV and be exposed to hours of such broadcasting. It’s meant to accomplish a subtle change in your behaviour, likings and inclinations.

The especially worrying aspect which is often neglected is that of television on young developing minds. Children are a huge percentage of television consumers. It has shown visible effects on their behaviour in schools, interactions with parents and siblings. It had caused an increase in delinquent behaviour and violence. Young children need to be protected from accepting a directed and scripted product as reality. It is a role of a parent to talk to their kid and teach them to think for themselves. It’s not that simple to find more info about this complex topic, but it’s your duty as a parent. You can’t forbid your kid to watch television but you can educate it not to believe in it blindly. 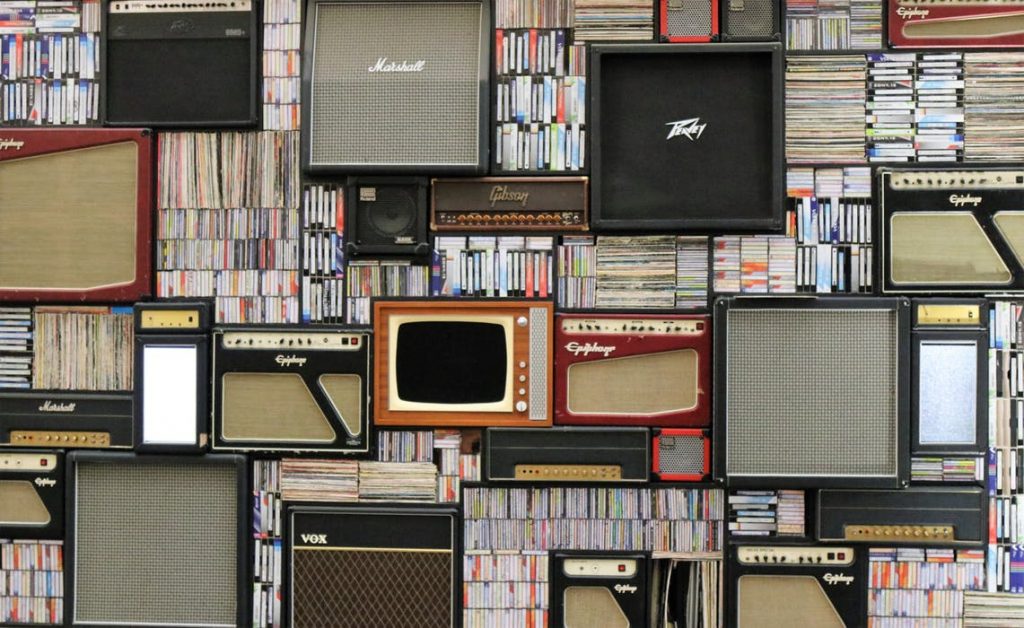 Television makes you experience numerous stimuli and you’ve presented with so many ideas and concepts, it becomes hard to discern what’s right. You always have to wonder who’s selling you what in that situation. Television is a medium designed to help build and maintain a consumeristic society and it’s hard not to be affected by it. Try to counter that by building genuine connections with real people around you. Try to talk to your spouse, to your children, cousins, neighbours. It will be much more fulfilling than just passively absorbing content. You have so many useful knowledge to gain and a great way to improve your connection.

Let it be said, right off the bat, that I’m a huge fan of TV shows from many different eras. My favourite show of all time is ‘The Good Life’ and I watch them fairly frequently, still finding them funny and relevant, even if the fashion is rather dated! I also still love Friends, which started when I was a Tween and has been a favourite ever since. Husband and I are also huge fans of Spaced, Only Fools and Horses, Porridge, Black Books, Father Ted, Cheers, Frasier, The Golden Girls and many more besides, all of which are very ‘of their time’ but carry well through the generations.

However, just recently, I’ve watched a few show which just don’t feel like they’ve got that timeless edge (in my humblest of opinions) and I thought I’d share them with you to see if you agree. 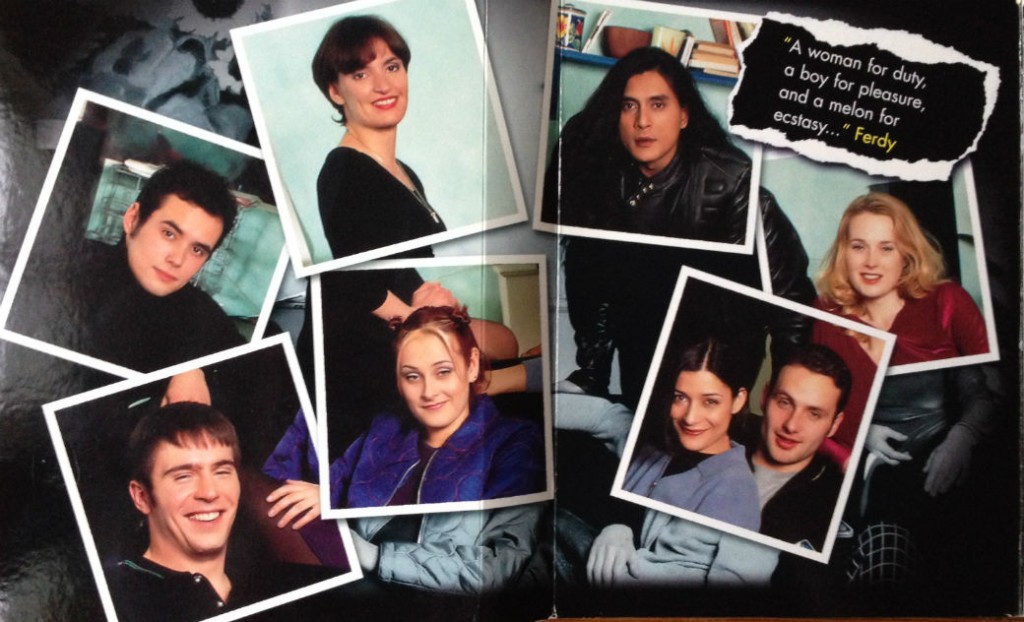 I recently acquired the box set of This Life as I was only 12 when they originally aired and usually in bed by the time they were on. I’ve heard a lot of waxing lyrical over the years about how edgy and relevant the shows were, so I watched the first three episodes of the first season…only to be thoroughly disappointed. The dialogue feels stilted and ‘try-hard’ and the whole thing just felt totally awkward and dated to me. I know I’ll get a LOT of disagreement, but if you’ve not seen it in the last ten years, watch it again and I’m sure you’ll agree. Also, while I LOVE Andrew Lincoln in The Walking Dead, seeing him prancing around in a Man U shirt just turns my stomach! 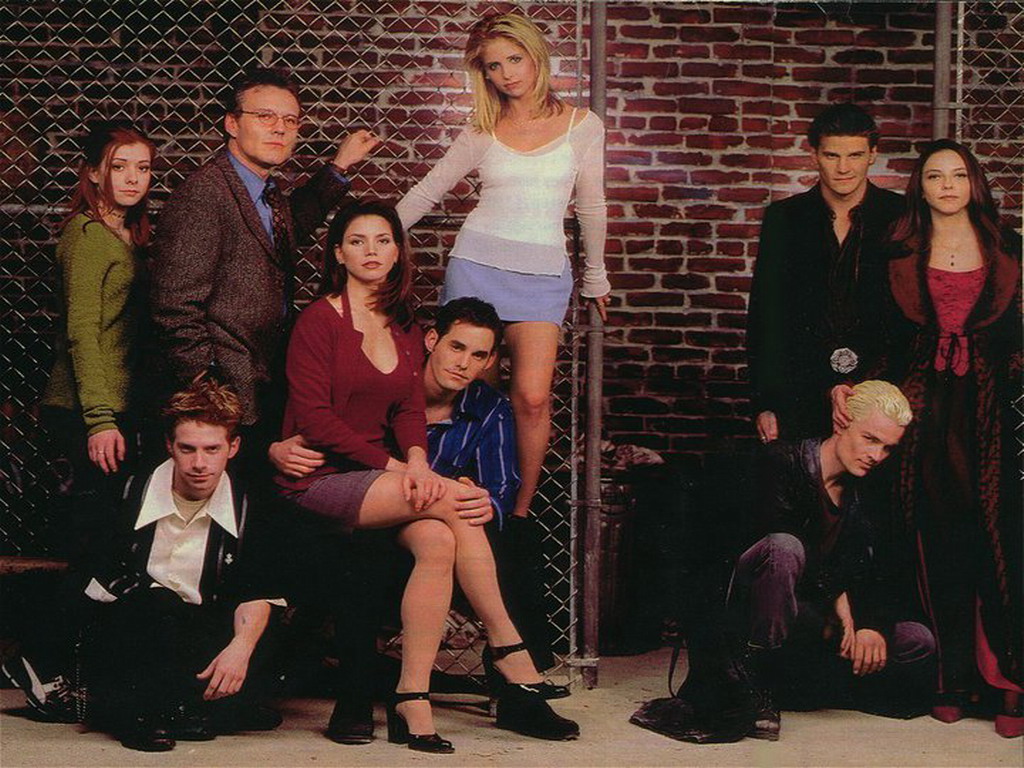 I was a HUUUGE Buffy nerd when I was a kid. I loved the orignal film and was super excited when the series was announced. Being a ‘terrestrial channel only’ house meant that I’d congregate at my friend Kate’s house to watch the new episodes when they aired on Sky and I was so impressed by the dialogue and story lines. I don’t know if it’s because I’m older or because the show has aged appallingly, but these days if I happen to catch an episode on FX, I spend the entire duration of the programme in a state of cringe! The dialogue is so nuanced that it feels  forced, like it’s been written by an out of touch grown up who thinks that’s the way kids speak (which is, essentially, the case…) and I’m not even going to start on the fact that the actors playing teenagers all looked into their mid-30’s and the clothes that they wore to attend High School were just ridiculous. 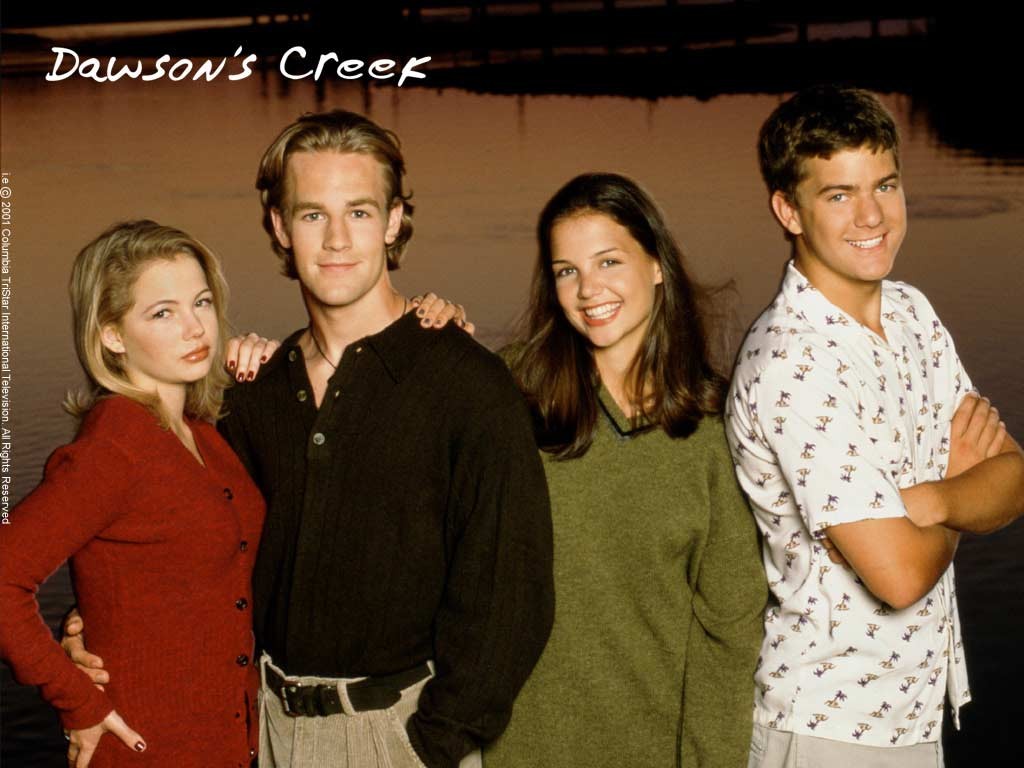 Yeesh. This was another favourite of mine when I was a kid and the whole ‘love-quadrangle-Joey-Pacey-Jen-Dawson’ thing seemed so grown up and complex to me when I was a kid. Maybe it’s because I’m a grown-up but the whole thing seems SO unfeasable to me now and raises so many questions.

“Would you allows you teenage daughter to have male visitors via a ladder to the bedroom window at all hours of the day and night?”

“How come no-one has seen Dawson going in through Joey’s window and realised how easy it would be to rob them blind?”

“Why does teenage Pacey dress like Charlie Sheen’s character in Two and a Half Men?”

“Why are they speaking in sentences which are made up of 17 times as many words as they really need to say, rather than grunting at each other like normal teenagers and rutting like rabbits on heat at every opportunity”.

Needless to say, the show does NOT commute well to 2013 and it won’t be one I revisit with any urgency. 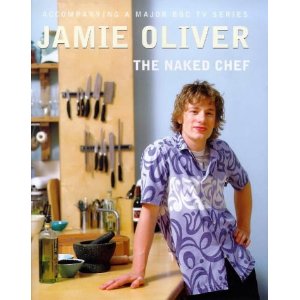 When this show débuted in 1999, everyone was so charmed by this surfy, Indie, cheeky chappy who ‘pukka’ed and ‘cushdy’ed cookery shows into the 21st century. It was unusual to see a young, trendy man behind a frying pan, much less one who drove a camper van and hosted all of his ridiculously cool and good looking mates at edgy, food-driven events in a loft apartment in London which probably cost a few million quid. Looking back now, The Naked Chef brings cringe to a whole new level and all of his ‘is he cockney, is he Essex’ dialogue is enough to make me want to peel my own skin off. It’s all very NINETIES, but in 2013 it all feels a bit desperate.

Sex and the City 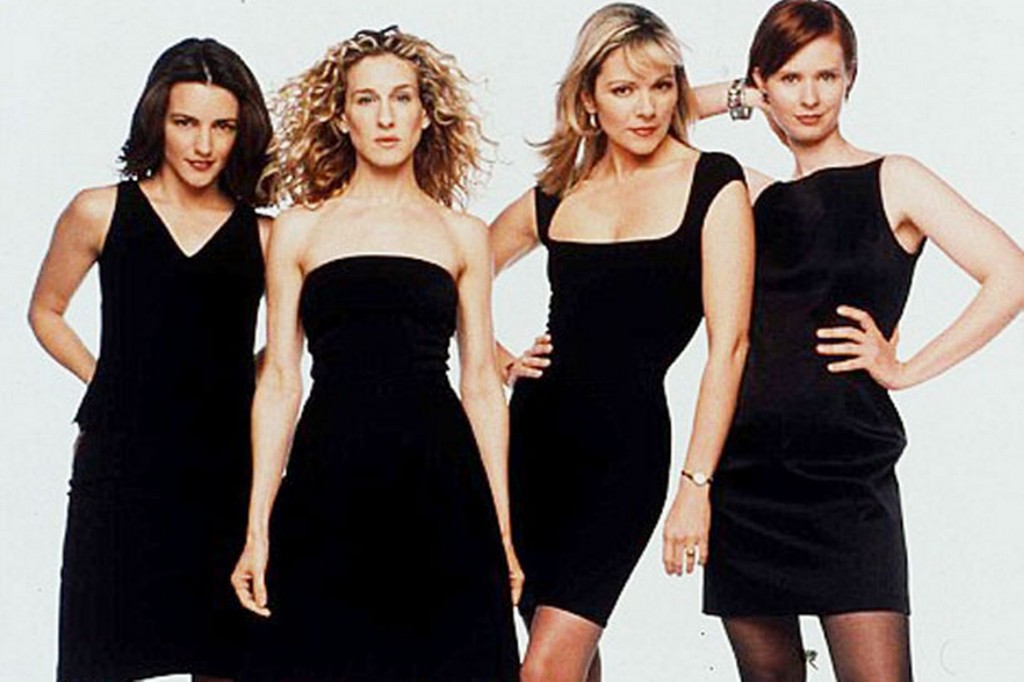 Okay, okay, don’t shoot me. I know I risk unleashing a world of indignation from a whole slew of Manolo-wearing SATC devotees, but I watched them all right from the beginning last year and they just haven’t aged well at all. The characters seem more like parodies of real people and some of the fashion is just offensive to the eyes (although I’m sure it was super high end at the time). It all seems like one big stereotyped cliché and, at the risk of starting a debate over feminism, I’m not sure that the show presents women in the best light.

Do you have any more to add to the list? Do you think I’m right or do you completely disagree with my choices? Leave me a comment below.