A few weeks ago, the lovely folks at The Nappy Gurus got in touch as asked if I’d like to be involved in a project to get disposable-using mums to try real nappies for a week, to coincide with Real Nappy Week (28th April to 4th May). I’d looked into using reusable nappies with Sausage, 6 years ago, but I didn’t find enough information which made me confident enough to give them a go, but with the support of The Nappy Gurus I was raring to go!

Our bundle of goodies arrived; a huge box containing all sorts of products, all of which left me feeling a little intimidated if I’m honest, but I needn’t have been worried. The Nappy Gurus have a bunch of consultants who talk you through every step of the journey – one hour-and-a-half long phone call and I felt a LOT more confident about what I should be using and when. The Nappy Gurus site is also packed with information, which is very useful for when I’m second guessing myself about which part of the nappy does what!

We’ve got 8 nappies to try, so I’ve decided to use one per day for the next week, and two on Sunday. Our first attempt was yesterday, and we decided to try out an ‘all-in-one’ nappy first, to make our lives easier.  An all-in-one does exactly what it says on the tin; the nappy has a waterproof outer shell and two thick pads inside to soak up whatever baby fills it with. 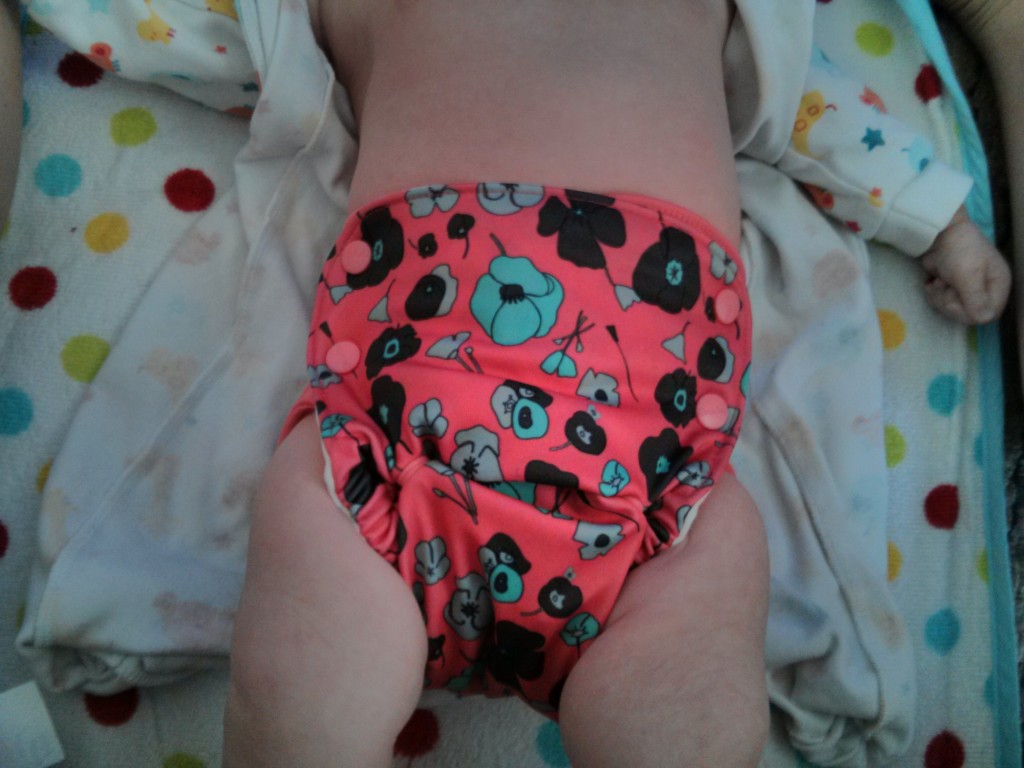 This is BB modelling the Gro-Via Newborn. One thing I was really pleasantly surprised about was that I thought it would be super bulky when it was on, but BB’s butt actually felt less bulky than when she’s in a disposable. I absolutely love the pattern on this nappy, it almost seemed a shame to conceal it beneath BB’s babygro!

Unfortunately, after less than half an hour of wearing this nappy, BB had leaked. It was a relatively small patch of leakage (about the size of a digestive biscuit) and I suspect it’s because I hadn’t made the adjustable leg holes small enough, or folded the nappy down so that didn’t have any gaps, so although I was disappointed it hasn’t put me off completely. The wee that did manage to stay in the nappy had soaked completely into the inner pads and didn’t feel like it was holding any moisture at all next to BB’s skin, which is great. The nappy itself also washed up beautifully after being used and I can imagine it lasting a really long time.

So, a slightly bumpy start to our real nappy journey, but it’s all a learning curve, isn’t it? Tune in next time to see how we get on with day 2 of Real Nappy Week!