Ever since Sausage was 3, we’ve been taking her to the cinema and make a point of seeing all of the new films that are released for her age range. The original Kung Fu Panda was released in 2008, the year that Sausage was born, but we made a point to watch it on DVD when she was old enough to appreciate it, and it’s been a firm favourite ever since, as is the sequel, Kung Fu Panda 2. This year, Kung Fu Panda 3 was released but we didn’t make it to the cinema to see it, so when Dreamworks offered us a copy to review, ahead of the official DVD release, we jumped at the chance!

The third installment sees main character Po, the hilarious and loveable panda voiced by Jack Black, make the transition from student to master in order to train a whole gaggle (I’m not sure of the correct collective noun for pandas!) of little pandas to become martial arts masters…but they aren’t exactly easy to teach!

I’ve got to admit, although I’m a huge fan of the first two Kung Fu Panda films, I was a little bit reserved about the third. Often, by the time this many sequels are released, the stories can be a little…turgid, and they have a tendency to feel like an attempt to cash in on a beloved franchise which, from an adults point of view, can seem a bit cynical. I needn’t have worried though as Kung Fu Panda 3 is just as fun and humorous as the first two iterations. 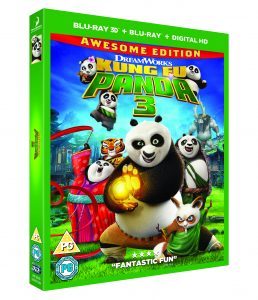 The voice cast of the movie definitely helps; as I mentioned above, Jack Black voices main character Po and he has a truly inimitable style which I think is loved by young and old alike. His humour can be described as ‘silly but occasionally salty’ which means there’s enough in there for the adults to appreciate as well as the young’uns. The legendary Dustin Hoffman also lends his talent, along with J.K. Simmons and Bryan Cranston, proving that there’s nothing low-budget about this sequel.

The good thing for us about this film is that it’s also really visually spectacular which means that Burrito Baby enjoyed it too; we tend to all go to the cinema together theses days as she’s really well behaved, but the films which really catch her interest and keep her engaged are the ones which look bright and colourful, something which can definitely be said about this film! The version that we watched was the standard 2D version but I can safely say that I think it would also look amazing in 3D, so if you have the opportunity to watch it this way, I’d definitely recommend it.

All in all, we really enjoyed Kung Fu Panda 3 and we’ll definitely be watching if they make a fourth installment!

DreamWorks Animation’s KUNG FU PANDA 3 is out on Digital HD on 4th July and on Blu-ray™ and DVD on 11th July.

(…And For Which He Probably Should Have Already Won an Oscar!)

A couple of days ago I was talking to my sister-in-law, who’s just recently been to see The Revenant, about Leonardo DiCaprio’s Oscar nomination and she mentioned that the first film she really saw him in was Titanic. When I was a kid, my friends and I were huge fans of Mr. DiCaprio and being the super nerds we were (shout-out to Katy. C., queen of all us film nerds) we basically made it our mission to watch everything he’d ever been in. Anyway, it occurred to me that, since Leo’s mainstream appeal didn’t kick off until he boarded that doomed ship, there are probably quite a few people who are unaware of his back catalogue, so I thought I’d share some suggestions of DiCaprio movies that you really should see: 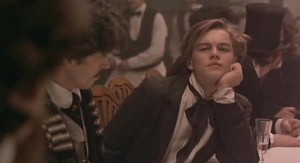 Leo stars as Arther Rimbaud, a French poet who lived in the late 1800’s, and looks at his relationship with fellow poet Paul Verlaine. The whole storyline is incredibly intense and despite the fact that DiCaprio was just 19 when it was filmed, he portrays the complex character incredibly well, steering through the plot with a maturity beyond his years. Period dramas are often difficult to get right, especially when they’re biographical, but this film is spot-on.

When an actor in their teens can hold up against a performance from Robert De Niro, you know they’re good, and that’s exactly what Leo does here. The film is a truly harrowing account of abuse, control and a less-than-charmed childhood which should probably only be watched when you’re in a fairly strong frame of mind, but it’s definitely one of this films which should be on everyone’s ‘must see’ list. 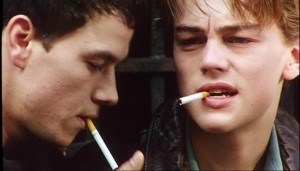 Yet another ‘gritty’ drama, The Basketball Diaries is based on the book of the same name, written by ‘jock-turned-junkie’ Jim Carroll. The film depicts Carroll’s descent from rising basketball star to heroin addict and should come with a WHOLE bunch of trigger warnings, including abuse, prostitution and death. It’s another film which isn’t exactly ‘light-hearted’, but Leo is testament to the fact that movies don’t always need a happy ending (even if I AM convinced that Jack could easily have fit on that door with Rose…) 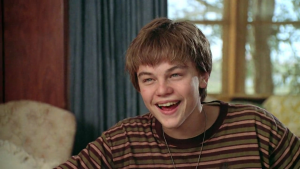 Despite the fact that Leo is technically only a ‘supporting role’ to Johnny Depp’s lead in What’s Eating Gilbert Grape, his portrayal of Gilbert’s developmentally delayed younger brother Arnie is as brilliant as it is heartbreaking as it is uncomfortable. Playing someone with a mental disability must be an absolute minefield; a balancing act of not being so over the top as to be hammy and insulting, but not being so subtle that you can’t tell that the character is supposed to have an impairment, but Leo manages it with startling ease, stealing the show from his older, more well-known co-stars. 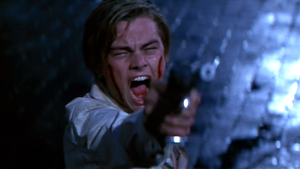 Even if you aren’t a fan of Shakespeare, you NEED to watch this film. Baz Luhrmann is one of my all-time favourite directors for the simple fact that he makes everything he turns his hand to a work of beauty, and this film is no exception. Leo’s raw depiction of love-struck Romeo, juxtaposed against the modern backdrop of ‘Verona Beach’, is simply stunning and the fast-paced shooting and striking sets make you almost forget that everyone is speaking 16th century English. Dash Mihok, most recently of Ray Donovan fame, is another stand-out performance as Romeo’s right hand man Benvolio, while John Leguizamo kills it as Juliet’s cousin Tybalt.