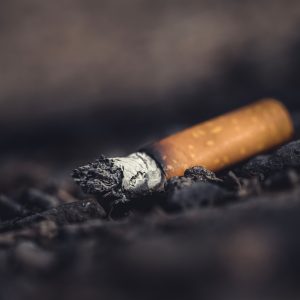 According to the Centers for Disease Control and Prevention, an approximate 14% or 34.3 million Americans ages 18 and older were considered current cigarette smokers. And while most people know the risks of smoking, three-fourths of that population smoked on a regular basis.

To make matters more difficult, due to the addictive components of smoking cigarettes, many smokers have difficulty quitting once and for all. Fortunately, not all hope is lost. There are many things cigarette smokers can do to help themselves kick their cigarette addiction.

1. Prepare yourself in advance.

Many smokers try to “quit cold turkey;” however, this isn’t reasonable for a lot of people. While many might prefer to simply stop for good, quitting smoking this way can actually be more difficult for some people in the short-run as nicotine withdrawal symptoms kick in and overwhelm the mind and body.

While it’s believed that relapse rates are higher for those who gradually wean off smoking cigarettes, slowly breaking off your habit is more natural, physically and mentally. That said, set an end date in advance, preferably two weeks out. Until then, slowly cut your habit little by little until you’ve smoked your very last cigarette on or before your official quit date.

Are you thinking about making the switch to e-cigarettes? Scope out trending e liquid hardware and e liquid flavors online.

Psychologically, when we tell other people about our plans, it essentially seals the deal, and we feel like we must follow through with it. Nobody wants to tell someone about something they’re going to do, only to have to face the embarrassment of telling them later that they ended up not doing it.

That said, telling your friends, family, co-workers, and others who know about your cigarette smoking about your plans to quit can be motivating for you to actually quit in the near future. Let them be your encouragement along the way.

Whenever you have to do something difficult, it’s important that you reward yourself to positively reinforce your hard work along the way. Log your milestones, count how many days it’s been since you quit smoking, post about your achievements on social media, and tell others about your successes.

Small, weekly rewards such as buying something cheap like a new book, going out to dinner or out for ice cream, or heading off to the movie theater are great ways to celebrate and reinforce your good behavior.

Quitting cigarette smoking isn’t easy, but it’s not impossible. Some ways to help kick the habit of smoking include preparing in advance to quit, switching to e-cigarettes, telling others about your plan to stop smoking, and rewarding yourself along the way. With hard work, any smoker can become an ex-smoker!

3 thoughts on “How to Help Yourself Kick the Cigarettes”