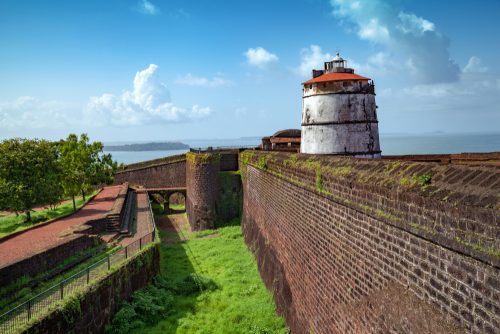 Despite its tiny size on the map of India, Goa attracts a good percentage of tourists in India. However, the tourists in Goa are mostly attracted to the beaches. We are not saying that the beaches of Goa are overrated, but, the other attractions are definitely underrated. If you think you can visit Goa only for its beaches, you need to think twice. The beaches should be on your bucket list. However, adding some of the other attractions of Goa to your itinerary will make your visit more fulfilling. Here, we are giving you top 5 attractions of Goa that can introduce you to the rich and varied history of the place.

While Britishers dominated the entire Indian Subcontinent, Goa witnessed the rule of Portuguese. Fort Aguada at the Sinquerim beach is one of the finest epitomes of Portuguese architecture you can find in India. This remarkable fort and lighthouse, covering the entire peninsula at the south-western tip of Bardez, is braving the ravages of time since the 17th century. The fort has not only guarded and protected Portuguese but has also served as a jail. It is believed that none of the enemies conquered the fort. Every nook and corner of the fort will tell you stories from Goa’s past. In addition to this, the place is also known for its alluring natural beauty and tranquillity.

Located on the shores of the Keri beach in Goa is a beautiful temple famously known as the Ajoba temple. The word temple may give you a hint that it is a place of worship for Hindus, but it actually is not. The Ajoba temple is important religiously as well as historically. You can find devotees of all religion, caste, and creed visiting the temple with same respect especially if you visit it on Sunday or Wednesday as these are traditionally the days for extending you thanks to the deities. People perform rituals on these two days after fulfilment of their wishes. The beautiful temple painted in turquoise and orange is a must-visit place in Goa.

Compared to other historical sites the Safa Masjid in Ponda is an unheard-unknown structure. This mosque built in 16th century by the Adil Shah Dynasty is one of the most famous and oldest mosques in Goa. Several other mosques were built at the time but eventually got destroyed by the Portuguese invaders. This national monument, under the purview of Archaeological Survey of India, is charming despite its simple architecture. The primary attraction of the mosque is the huge masonry water tank with about 40 chambers built in the Mehrab architectural style.

St. Cathedral is one of the oldest and most revered religious structures in Goa. This magnificent monument was built in 16th century by the Roman Catholics under the Portuguese. This is Asia’s largest church to date. It is dedicated to St. Catherine of Alexandria as a memorial for the victory of the Portuguese over the Islamic army which ultimately led to the capture of the city of Goa.

Located just at a distance of 18-Kms from Panaji is the mighty Sinquerim Fort. Constructed in the year 1612, the fort served as a reference point for the ships coming from Europe. The fort was built for guarding Goa under Portuguese from Dutch, British and Maratha armies and is also seen by many people as a lower extension of the Fort Aguada. Although the Sinquerim Fort is lesser known when compared to Aguda fort, it is an equally crucial historical structure. The beach is cleaner here, and the waves are not as harsh as others.

What are you thinking now? Book cheap Chennai to Goa flights before summer starts getting unbearably hot. Enjoy the beaches of Goa but try to look beyond them too.