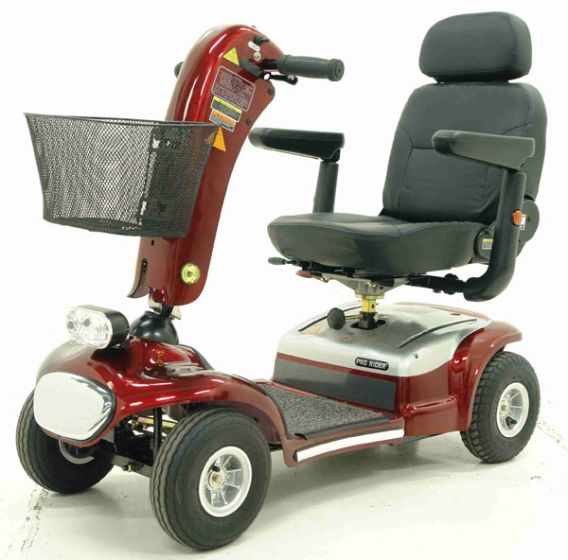 I’ve written before about my Grandad John and what an amazing grandad he was, but he was a really remarkable person in a lot of other ways, too. He was intelligent and hard-working, and a great Dad to my Dad and his brothers, but I think his remarkableness really came into its own after my Nan died and his own health deteriorated. He was on his own for over ten years and had to learn to cope with life on his own, but he did it with amazing resilience – although, that’s not hugely surprising for someone who once told me a story about how he accidentally drove an ambulance into a camel in the middle of the Libyan desert! Here’s a few things he used to make his life easier:

Once his eyesight got too bad to drive, Grandad was determined that he wasn’t going to be stuck indoors, so he invested in a Pro Rider Mobility road scooters. It meant that he could still get to the shops to to his grocery shopping, still visit his neighbours and still have a semblance of the independence that he prized so strongly.

When Grandad’s eyesight started so get bad and his glasses didn’t help as much, he invested in a whole load of magnifying glasses of different types and strengths and they were dotted around the house to help him. They ranged from small handheld ones to a massive one which I think was a surgical grade magnifying glass (like the one Joey stands behind in Friends after Mr. Heckles dies!). They allowed him to read his mail, read the paper and see finer details of things he needed to do.

My Grandad’s house phone had the biggest numbers of any phone I’ve ever seen, which meant that he was able to see the numbers to dial the phone. He had an A4 sheet of phone numbers beside the phone too, and all of the numbers were written in 3-inch high letters!

Grandad was hard of hearing even when I was little (I remember being about six and chuckling to myself because he’d turned his hearing aid right down so he couldn’t hear my Nan nagging him!) but as he got older it obviously got worse. He invested in a doorbell which had a little unit he could put in his pocket which vibrated when the bell was rung, so he didn’t even need to be able to hear the bell to know someone was at the door.

This was one of my favourites, but mostly because I liked to grab people’s bottoms with it as they walked past me – Grandad had one of those things that convicts in America pick rubbish up with to help him pick things up off of the floor or grab things which were out of reach and it was really useful once his mobility became restricted.

Do your elderly relatives have any gadgets which make their lives easier? Leave me a comment below.