Having an elderly dog is not wholly unlike having a puppy in the challenges that it throws up. Chuck is now 14, which is the equivalent of being 85 in human years, and much like an 85 year old human, his faculties aren’t what they used to be. We were told at the beginning of the year that his heart was starting to fail and this week we’ve discovered that, thanks to a few years of strong anti-inflammatories because of his arthritis, his kidneys are now struggling too, which means he’s starting to forget his house training. 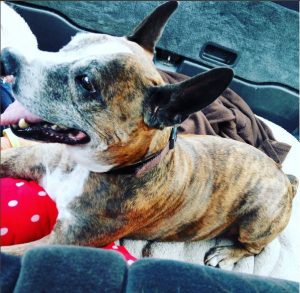 His quality of life is of the utmost importance, but adapting our home so that we can all exist peacefully is important too, so we’ve been thinking about ways to pet-proof our home for an elderly dog. Here’s some the things we’ve come up with:

When a pet starts to lose continence, it’s usually a sign that they’re nearing the last portion of their lives, but if their quality of life is otherwise high, it needn’t be a reason to say goodbye. We’ve got laminate flooring in the downstairs of our house, so keeping Chuck confined to these areas when we’re out minimises the risk of coming home to find a puddle on the carpet and makes it significantly easier to clean up.

As I mentioned earlier, Chuck has arthritis, and has actually had it since he was 7, but his mobility is more limited now as the disease advances, so stopping him from going up and down the stairs unnecessarily is important. We’ve installed a stair gate at the top and bottom and Husband tends to carry him up to bed in the evenings to minimise the impact on his joints.

When he was younger, Chuck was more than happy to sleep in his bed in the living room, or flop down on the end of our bed! These days, he gets far too cold because he’s going bald in places, so we’ve actually made him a dog-cave! We have a huge cupboard on our landing which is about 8ft deep and 3ft high and wide, so we’ve put a doorless crate in there and insulated the whole cupboard by putting duvets and padding around his crate, as well as soft, warm bedding inside it for him to burrow into. He actually loves his bedroom and sleeps sounder in there than anywhere he’s ever slept. It’s also important for elderly dogs to have a space to retreat to if they feel like they need it, so this is perfect for him.

Raising a dog’s food bowls is important even before they’re elderly as it will reduce the strain put on their neck when they eat, and if they’re a deep-chested breed can reduce the risk of bloat. However, older dogs usually need even more help in this department, so making sure that both their food and water bowls are at a good height for them to eat and drink from without too much of a stoop is really important and can improve their quality of life by quite a lot.

Do you have an elderly dog? Have you adapted your home in some way to make their lives easier? Do leave me a comment below, and more more information about laminate flooring, head to Posh Flooring.

One thought on “How to Pet-Proof Your Home”