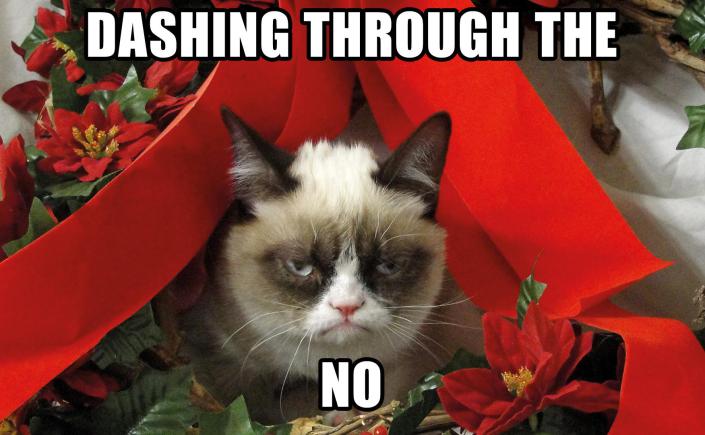 The eagle-eyed amongst you will have noticed that today’s date marks exactly a month until Christmas Eve, which means that the whole world will be going Christmas-mad, and every shop, TV advert and event will be geared up to all things festive. Despite the fact that Thanksgiving isn’t even over yet, Christmas seems to be everywhere we go, and I’m not going to lie, it drives me a little bit mad. Don’t get me wrong, I love Christmas, especially now we’ve got the girls and it’s all about them, but starting this early just destroys the magic for me.

I’ve seen several people on Facebook, both in random groups and on my friends list, who’ve got their tree up already, and some who’ve even had a Christmas dinner already, which is absolutely fine for them, but not for me. For me, Christmas is really special, a time to spend with family and friends and indulge in all of the excesses of the season…ONCE a year. Christmas is big and exciting and a happy time, but doing it more than once would just dilute it completely.

For the last few years in a row, I’ve managed to shoot my festive load WAY too early – I start to get excited at the beginning of November, planning presents and decorations and all of the other bits that go with it, and by the time 25th December arrives, I’m spent – both mentally AND financially. I seem to have a finite amount of Festive cheer and if I let it all go too early I have none left for the big day. Christmas Day is genuinely one of my favourite days of the year but there’s nothing as disappointing as polishing off your Christmas dinner and thinking “Oh. I don’t actually feel that Christmassy…”

The thing is, Christmas is a one, maybe two, day celebration, or at a push three days if you include Christmas Eve, Christmas Day and Boxing Day. Most of us spend the equivalent of a month’s wages getting ready for it, and if we start the the beginning of November and don’t take our trees down until after New Year, that basically means that Christmas lasts TWO MONTHS. Put into perspective, that’s 1/6 of the year – there is literally NO other holiday that we would allow to take over our lives for that bloody long!

I know I probably sound like Scrooge but I don’t dislike Christmas altogether – I just wish people would hold their horses. I’ve seen several houses which already have elaborate lighting displays outside and it’s just making me cross. It won’t even be the slightest bit special by the time Christmas arrives, and I think I’d probably throw my Christmas tree on the bonfire if I had to cope with tinsel droppage and fallen baubles for two whole months! What people do in their own living rooms is entirely up to them and I’d never dictate to them what they should and shouldn’t be doing, but it’s just not for me.

What do you think? Am I a miser or are you right here in NON-Christmas Land with me? I’d love to hear what you think,