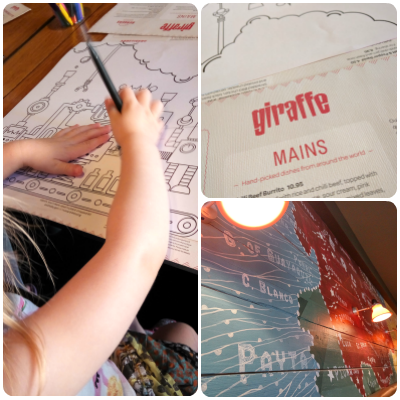 This summer holiday has been a bit of a culinary eye-opener for us in the Mum’s the Word house as we’ve been reviewing different restaurants each week and this week’s meal was at Giraffe. Giraffe’s strapline is “Freshly cooked food for everyone served to the sound of great music. Guaranteed to make you feel good!” so we took the girls and MIL with us again to get a good overview of how well they cater for all ages.

Technically, Lakeside is our closest Giraffe but we opted for Chelmsford for a bit of a change of scenery and I’m glad we did. It’s right in the middle of the high street and super easy to find, plus it’s right by the river which was lovely on a sunny day. In fact, it would be a really nice location for an early evening drink and dinner, so next time we go I think I’ll leave the kids at home and just go with Husband.

On the way there, Sausage (who’s recently got her first mobile phone and uses ANY opportunity for a good Google-up!) decided to read the menu to MIL to give her an idea of what she could choose and I think it made MIL a little wary, given that she prefers slightly plainer food and Giraffe’s menu is full of things with exotic sounding ingredients. However, once we got there and she had a chance to read the menu for herself, I think she realised that there were plenty of things she liked.

The kids menu doesn’t have starters but the adults ordered starters and we all ended up sharing, which is something we do anyway as we’re a bit like a wolf-pack, letting each other tuck into our grub. MIL had a garlic flatbread, Husband the chicken gyoza with sweet chilli dipping sauce and I had the Tuscan lamb meatballs.

The girls took a great liking to MILs flatbread; luckily it was HUGE so we all had a bit and there was still some left at the end! It was really nice, soft in places, crunchy in places, just garlicky enough without being overpowering. My meatballs were truly delicious, lightly spiced lamb (which you’d expect to be fatty but really wasn’t) in a rich tomato sauce which was almost like a stew. Serving it with a warm tortilla was perfect as it allowed me to mop up all the sauce afterwards! Husband’s gyoza were the real star of the starters though; the dumplings were lightly fried, so they were just crispy but still soft in the middle and the nouc cham sweet chilli sauce was flavourful and sticky, just how it should be. Husband and I didn’t find it spicy but MIL found it a little hot for her taste, so if you’re not a fan of any sort of heat they might be one to avoid.

For our mains, the girls chose from the kids menu with Sausage opting for a cheese and tomato quesadilla while BB went for a chicken wrap. Husband had the jerk ribs and sweet potato fries, MIL had the chicken Milanese and I had a chilli beef burrito.

One thing I liked about the kids menu is that it actually offered some really diverse dishes. Sure, there are burgers and fish fingers on offer but there are also noodle bowls, grilled salmon and salads. I think we’re long past the era where kids are served bland, uninteresting food while the adults tuck into a culinary delight so it was refreshing to see some nice options for kids. Sausage really enjoyed her quesadilla (she’s a huge fan of all things Mexican) and BB loved her wrap (which I had a nibble of, for science, and found really fresh and tasty), although she couldn’t eat it all.

Husband’s jerk ribs were a hit; the meat itself was deeply seasoned although both Husband and I commented that they could have stood to be a lot spicier as there was none of the heat that we usually associate with jerk, however they were still very pleasant. I’m not a fan of sweet potato but his fries were a hit with everyone else! MIL actually really enjoyed her main after being worried about not finding a dish she’d like and said that the potatoes were especially nice.

If I’m being completely honest, I wasn’t a fan of my burrito. There was nothing wrong with it, per se, and it was exactly how you’d expect a burrito to be, but it just wasn’t to my taste. The sour cream was a nice addition but the mince beef mixture inside was overwhelmingly smoky and I really didn’t like the pink onions which seemed halfway between raw and cooked, but not one or the other.

Dessert was what I was REALLY looking forward to. I’ve never tried churros before but spend enough time on hipster food websites to know how trendy they are and I’ve been wanting to have them for AGES…let me tell you, I wasn’t disappointed! Sausage and I both had the churros, her from the kids menu and me from the adults and we both seriously enjoyed them. The chocolate dipping sauce was really rich and almost bitter but the perfect accompaniment to the sweet, crispy dough; a very indulgent end to our meals.

MIL had ice cream (take a look at Jane’s Kitchen Miracles for the best ice cream makers) and chose one scoop each of vanilla, chocolate and cherry which was an inspired choice. The cherry ice cream tasted like actual cherries! BB had a kids brownie which came with ice cream (beware, the brownie is HOT! and will burn little mouths if eaten without caution) and polished off as much as she could manage. I think Husband was the winner again with dessert choices; not usually one for mega sweet food, he pushed the boat out and chose a banana waffle split. I cannot emphasise enough how delicious it was. The waffle was chewy and the butterscotch sauce was like a liquid Werthers Original on the plate! Husband’s one minor complaint was that the banana could have stood to be cooked just a little more.

I also need to give an honourable mention to the drinks: Sausage had decided on a “Hippy Hippy Shake” smoothie (pineapple, passion fruit, mango, banana, pomegranate juice) before we even got there and BB followed suit, both of which got polished off in about three seconds. Husband had a strawberry smash which was literally some smashed up strawberries in a glass, topped with soda and mint, and it was SO refreshing! I went for the Orchard Pig Sparkling Apple and Elderflower and enjoyed it so much that I immediately started Googling to see where I could buy more! All a really nice alternative to the usual soft drink offerings.

Aside from a couple of very minor glitches, I think our Giraffe experience was really positive. The staff were incredibly polite and helpful (activity sheets and crayons for the kids are ALWAYS a winner) and the actual setting of the restaurant was really pleasant. We enjoyed the food and all commented that it’s definitely somewhere we’d eat again. Thanks so much to Giraffe for being the place that I finally lost my churro virginity. I’ll remember it forever…