It’s not often that Husband and I go out for dinner, just the two of us…in fact, I’m struggling to think of a single time it’s happened since Sausage was born, so when Strada asked if the two of us would like to come along for dinner, I got very excited! Our nearest Strada is at Lakeside Shopping Centre in Thurrock and it’s right next to the lake, so it was the perfect setting for a relaxed evening meal.

We were given the choice of where to sit and although it was the hottest day of the year so far, we chose to sit inside – the outside area was already filling up when we arrived a few minutes before 6pm and by the time we left it was absolutely heaving, whilst inside was almost empty, so we definitely chose well. We got situated and were brought our drinks plus a jug of water for the table, which was much appreciated in the heat.

I wasn’t drinking alcohol because a) I was driving and b) I’m on strong antibiotics for the hideous tooth situation so I opted for a San Pellegrino Limonata, which is basically the most refreshing thing on the planet. Husband had a glass of Primitivo, a full-bodied red (which I said smelled like Christmas in a glass!) and although it was on the pricey side, Husband was impressed enough to be looking it up on the internet on the way home to see where he could get a full bottle for me to try when I’m able again.

So, onto the food!

Because Strada is Italian, I wanted to go for things which I felt were quintessentially Italian, so for starter I opted for the bresaola while Husband went for the antipasti, both of which were incredible. The beef carpacchio part of my bresaola was so, so tender and flavourful and the combination of parmesan, rocket and balsamic reduction were to die for. Husband’s antipasti (which I may have sampled…!) was just perfect; little nibbles of different flavour and textures, cured meats combined with the freshest pesto and mozzarella – I almost wish I’d opted for the same.

For our mains, we both decided that we were in the mood for seafood after such a meat-based starter so Husband had the sea bass while I had the seafood risotto. I’m going to make a confession here; I’ve never actually tried sea bass before…until now. The fish was served with thyme roasted fennel and herby potatoes and was a perfect choice for a hot evening as it was light and summery but full of flavour. The bass was served ‘canoed’, which meant that it’s gutted but left on the head, so there were still a lot of bones in it, which made it a little bit of a faff to eat, but Husband didn’t mind; it’s just worth bearing in mind if you aren’t a fan of bones. 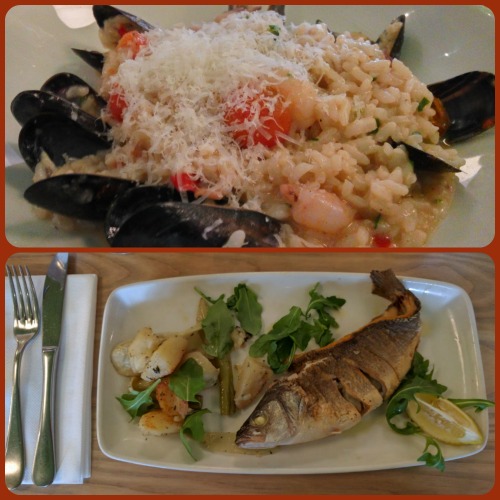 Seafood risotto is one of my favourite dishes and it’s not something I’ve ever been brave enough to cook myself so it’s always a treat when I have it in a restaurant, but it does mean I’m quite fussy about it. Strada’s seafood risotto was really top notch. The risotto itself was creamy and absolutely packed with tiger prawns, mussels and squid and had the slightest kick from a hint of chilli, a very welcome element to cut through the creaminess a little. The seafood was all very well cooked (I’m often a bit wary of squid as it can be rubbery, but this wasn’t rubbery in the slightest) and the fresh parmesan which was grated over the top at the table added a lovely edge to the overall flavour. 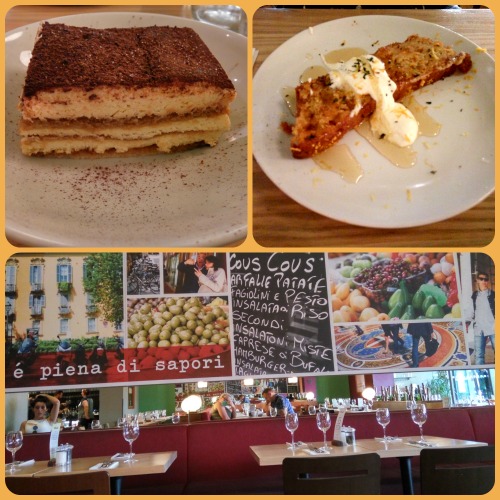 Dessert was an absolute delight. I opted for the tiramisu because I’m a bit of a fan of anything coffee flavoured while Husband opted for the golden polenta cake. My tiramisu was exactly as you’d expect it to be; sweet and soft with a strong coffee flavour, the perfect end to the meal for me. Husband’s polenta cake was probably the exact opposite of my dessert in many ways; grainy and textured rather than soft and creamy, zesty and spiced opposite my rich and velvety, however we both agreed that it was one of the nicest desserts we’ve ever tasted, and promptly came home to find a recipe so that we can try making it at home!

In terms of the bill, by my calculations it would have come to £67.60, which included three courses each, Husband’s large glass of wine, my two soft drinks and a bowl of marinated olives for the table, which I really don’t think is too bad at all. There is also a “Classics” menu which offers 2 courses for £10.95 or three courses for £13.95 every single day between 12pm and 7pm, which means that you could effectively have a three course meal for two for under £30.

The thing I liked about Strada is that their menu isn’t ridiculously massive, but each dish they do, they seem to do VERY well. I also like the fact that they have dishes which are very traditionally Italian, but they also do dishes like burgers and plainer pizzas, so dining with a fussy eater needn’t be a worry. The one and only area where I would mark them down SLIGHTLY was the cost of drinks – Husband’s glass of wine was £8.15, which is a little steep in my opinion, but we often find the alcohol to be higher priced in chain restaurants, so I guess it’s to be expected. Other than this minor thing, we had a really lovely evening; the staff were incredibly polite and friendly, stopping by to offer their suggestions while we were perusing the menu, the setting was really pleasant and the food was enough to make Husband say “we’re definitely coming back here again!”.

Thanks to Strada for having us – we’ll be back soon!