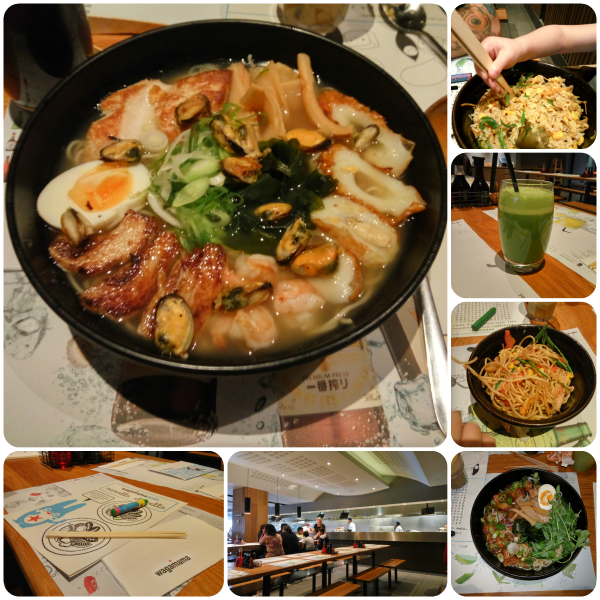 One thing that we love to do as a family is eat out, especially at places we’ve never tried before, so when Wagamama offered us the chance to go along and try their menu, we were really excited. Despite the fact that we’re all Japanophiles, with a shared love of their food and culture, we’ve never been to Wagamama before so yesterday was a whole new experience for us.

As soon as we walked in, the thing which struck me was the actual style of dining; the tables were set up into long rows of benches, rather than isolated little islands in the dining area which is the usual English way. It was different in a “We’re not in Kansas anymore, Toto” kinda way, but something which I really loved.

We’d checked out the menu online before visiting and the girls knew what they wanted, but Husband and I ummed and ahhed for a while because everything on the menu looked so tasty. We were given plenty of time to decide and Husband ordered a rather exotic looking juice in the meantime. (Kale, apple, lime and pear, in case you’re wondering and it just tasted so GREEN!).

In the end, the girls chose a mini chicken yaki soba and a mini chicken cha han, both of which were really tasty. One of the things I really liked was that each dish was made of super fresh ingredients and were bought out to us as soon as they were ready, meaning no-ones meal was left to sit under lights while we waited for the rest. I also loved the kids chopsticks that we were given which kind of slot together and made it loads easier for the girls to use.

Husband and I ended up opting for the shirodashi ramen (him) which was slow-cooked pork belly, marinated in bulgogi sauce in a noodle and reduced chicken broth with dashi and miso, topped with pea shoots, menma, spring onions, wakame and half a tea-stained egg while I went for the Wagamama ramen which was grilled chicken, barbecued pork, prawns, chikuwa and mussels in a miso, ginger and chicken noodle soup. topped with half a tea-stained egg, menma and spring onions.

I’m not going to lie; I think mine was genuinely one of the nicest things I’ve ever eaten. The noodles were tender and the broth was fairly simple but the pork belly was unbelievably tasty and the mussels were like little bombs of flavour throughout the dish. I’ve never had wakame before and actually thought it was squid while I was eating it, but it’s kind of like a Japanese equivalent of a crabstick, but formed around bamboo…apparently! Husband really enjoyed his too; his broth was spicier than mine with a really rich, warming flavour and the slow-cooked pork was, again, super tender and flavourful.

I think the thing that we liked the most about our Wagamama experience, although it’s hard to narrow down because it was a delight from beginning to end, was just the fact that it was something different. Don’t get me wrong, we love a burger and all of the “usual” choices in family-oriented restaurants, but it was SO nice to consider different flavours, textures and ingredients, especially for exposing the girls to new things. It was also a lot healthier than your average restaurant lunch; my Wagamama ramen totalled about 700 calories for the whole bowl, and given how full I was I thought that was pretty reasonable. In fact, we were all too stuffed for dessert but next time we go to Wagamama (and there WILL be a next time!), that banana katsu is MINE!

Our bill, for 2 adult mains, 2 kids meals, 1 adult fresh juice, 2 kids fresh apple juices (and I’m not exaggerating when I say this – it was the freshest apple juice I’ve ever tasted…it was literally like someone had crushed an apple into a glass) and a Coke Zero for me came to £37, which I have to say is really reasonable. I certainly don’t begrudge a lunch bill like that when it’s being spent on huge portions of fresh, super nutritious food which is cooked to order.

I think I could quite comfortably say that Wagamama is now a favourite eatery for all of us in the Mum’s the Word house and somewhere which will definitely be on our must-visit list for our next shopping trip. Thanks to Wagamama for having us and for converting us to their way of eating.