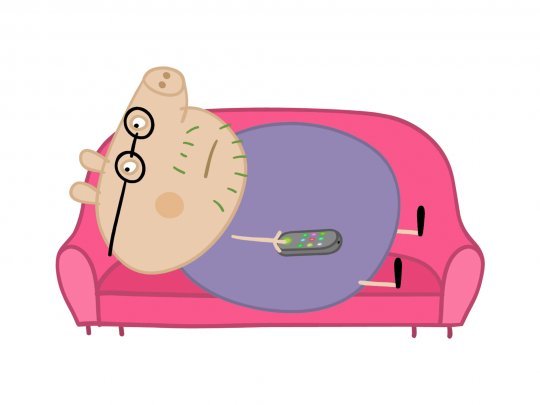 Having two kids with a 5 and and half year age gap means that I’m suffering enjoying a lot of the same programmes a second time around, and BB is at that age where EVERYTHING must be Peppa Pig (save for a couple of times a week when she takes a brief foray into Topsy and Tim, her previous programme du jour). This means that, during the week, Peppa is usually on in the backgroud for much of the late morning/early afternoon period while I work and do housework and BB mills around doing what it is that toddlers do (picking her nose and sticking stickers on my furniture, mostly).

Watching the same episodes of Peppa over and over again means that you notice certain things and one of those things is what I like to call “The Emasculation of Daddy Pig”. See, there seems to be a running theme in Peppa; Daddy is a bit useless and is fair game for mockery. Don’t get me wrong, I’m all for a bit of banter (HASHTAG BANTZ), but he seems to really get the rough end of the deal, and it’s got to a point where it’s verging on misandry. Jokes are made about Daddy Pig that no-one would DARE make about Mummy Pig because it would have people getting into an Everyday Sexism frenzy…so, let’s take a look at what those episodes might look like…

Everyone decides (after years of mockery) that Mummy Pig needs to get off of her fat arse and lose some weight, so Daddy Pig forces her to do exercise videos and go on bike rides (on a bike which is dangerously small for her). Everyone is waiting at home to take the piss out of how unfit she is.

Mummy Fucks Up The DIY

Daddy Pig has an important meeting to go to, so he asks Mummy Pig to hang a painting. Of course, Mummy is a hapless fuckwit and manages to knock a whole load of plaster off of the wall. She’s terrified that Daddy Pig will have a shit-fit at her when he gets home so she quickly re-renders the wall before he gets there. Once he gets home, he takes over because he’s obviously so much more capable than her and puts the painting up with a single flick of a hammer.

The whole family visits the supermarket to buy lots of healthy things off of their list. When they get to the checkout, they realise that Mummy Pig has put a chocolate cake on the conveyor belt and although they all agree that Mummy is a greedy, ‘naughty’ bastard, they all let her have it anyway (despite the fact that she’s clearly the main breadwinner and as such can buy whatever the fuck she wants).

Peppa gets a phone call from her French pen-pal and despite claiming she can speak French, Mummy Pig isn’t able to communicate with Delphine and, in fact, doesn’t even recognise that she’s speaking a foreign language in the first place, declaring it all to be “nonsense” and revealing herself to be a braggart who lacks any form of common sense or intelligence.

Now, I’m just going to put this out there; if ANY of these episodes were real and this kind of mockery, fat-shaming and stereotypical sexist bullshit was aimed at Mummy Pig, there would be OUTRAGE. But, because Daddy Pig is only a man, it’s okay to disregard his feelings and bully him on a daily basis, because don’t be silly, men don’t have feelings!

The worst part is, Peppa Pig was created and is written by TWO MEN! That leads me to one of two conclusions – either Mark Baker and Neville Astley are weird, self-hating males who think it’s okay to deride their own gender OR they think that they’re somehow appealing to the common housewife who obviously hates men. I’m not sure I’m comfortable with either conclusion, if I’m honest. I want my girls to grow up knowing A) everyone has different strengths, regardless of their gender and B) bullying people based on archaic, clichéd notions is just wrong.

I’d love to know what you think about this. Am I reading far too much into Peppa bloody Pig and need to seriously get a life? Or is this something which gets on your teats as much as it does mine? Leave me a comment below.

17 thoughts on “The Continued Emasculation of Daddy Pig”