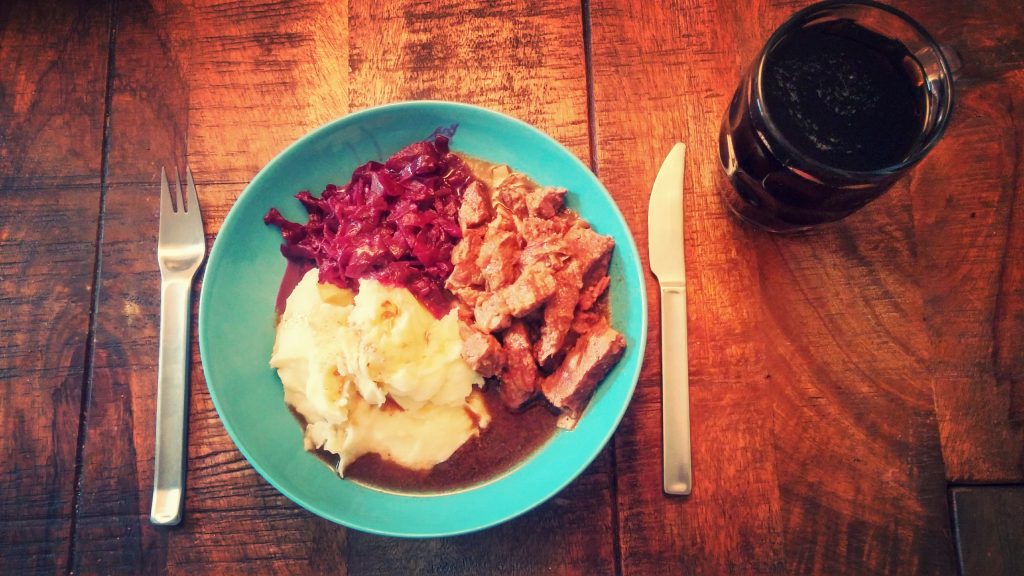 Today is the first day of my slow cooker challenge, and it was one of those awkward days where I had to be at an appointment in the mid afternoon. This meant that I needed to choose a dish for the day which could be put on around lunchtime and left for at least 6 hours, so I opted for the Beef and Guinness stew. It’s rubbish weather here (we’ve actually had the heating on today!) so coming home to something warm and tasty, bubbling away, was incredibly welcome.

If I’m honest, I don’t know the difference between a casserole and a stew, so this could be either, but I opted for a recipe without veg so that we could choose what to have with it – I’ve served it with red cabbage and mash, but you could choose anything you fancy (or have in the freezer).

Often I shy away from dishes which require any sort of prep or pre-cooking because I feel like slow cooking should basically just be “chuck it all in”, but I can honestly say that the extra effort was well worth it here. The beef was super tender because it had cooked for so long, but the flavour was incredible because of the initial browning in seasoned flour and the salty morsels of bacon added bursts of savoury flavour to the dish. The stock, herbs, ale and juices from the meat and onions combined to make the most delicious gravy…I had to resist the urge to dip bread in the remaining sauce in the pot!

I also think this dish would freeze really well, so I’d be tempted to make a double portion and freeze half next time I made it. All in all, I’m really pleased with today’s recipe and I’m really glad I kicked off with this as it was just perfect for today!

Don’t forget to blog about what’s in your slow cooker and link up with the linky below.