This time of year always has us thinking about slightly upsetting things as two family members have passed away in October of previous years. Thinking about losing family members always makes me feel introspective and often makes me think about the practicalities of dying, such as writing a will and the cost of funerals. SunLife has put together an infographic which shows the average cost of a basic funeral in different parts of the country and how those costs have risen over the years. Take a look: 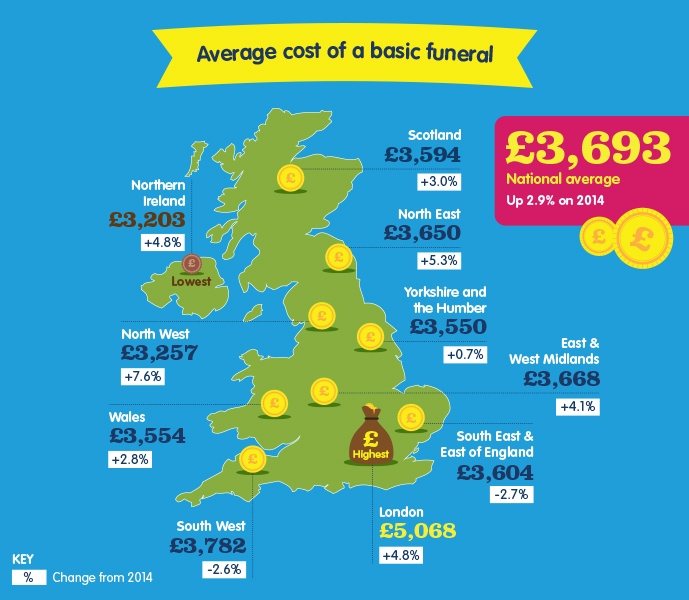 Although cremation is still the cheapest option, the overall cost of a funeral including burial OR cremation has almost doubled in the 11 years since 2004. It’s an alarming statistic which definitely makes me think about investing in a funeral plan at some point because £5k is an awful lot of money for a family to try to come up with in the event of a tragedy.

I often think that funerals are more for the living than the dead – when I pass away (hopefully at some grand-old-age, after having done everything I want to do in life…) I’m happy for any viable organs to be used and I don’t really have a preference over what my family do with me once I’m gone as my body will simply be an empty vessel. One thing I do like the idea of is the tree pods, which uses your body as food to grow a new tree – something about living on as energy in a tree really speaks to my beliefs about the cycle of energy on the planet, but I’m not sure if it’s something that can be done in the UK.

The saddest thing about the info that SunLife has gathered is that 1 in 6 families now could not afford a funeral for a loved one and that over half of people need to borrow money to afford a “send off” if no previous arrangements had been put in place. The weight of responsibility on the people left behind to feel like they’ve given their loved ones a decent funeral can be huge, although so many people don’t make any arrangements at all because of some feeling of tempting fate by contemplating ones own mortality.

When it comes to it, if I were to make provision for my own funeral, the only thing which would really bother me was making things as easy and painless for my loved ones. I don’t mind what they do with me or if they decided to commemorate my life with a wake or a headstone, I just want to ease their upset as much as I can, and if that means ensuring that they don’t end up saddled with debt or money worries, then it’s something I definitely need to consider.