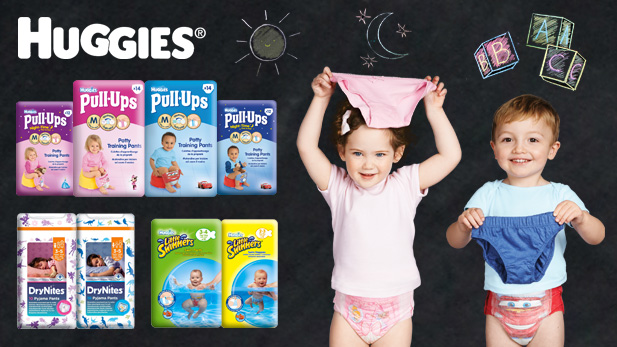 A few weeks ago, Huggies got in touch to see if we’d like to work with them on a review of their Pull-Ups, and they kindly sent us some daytime pants, night-time pants and a whole selection of other goodies to try out, including a potty. Burrito Baby has got to an age now where she’s really vocal about going to the loo – she’ll often declare “WEE WEE!” or “BOOM BOOM!” just before going, which is a really good pre-cursor to getting potty training underway and Husband and I have been talking about getting a potty just to keep in the room for when she decides to use it.

Because BB idolises her big sister, she’s quite adamant that she’s a big girl and most definitely NOT a baby, so being able to offer her big-girl pants to put on when I first opened the Pull-Ups was a massive plus-point for her. She’s also a huge fan of Minnie Mouse at the moment, so she was thrilled to see her on her pants, running straight through to Husband and shouting “DADDY! MINNIE! BUUUUM!!” (most things that BB says are at a rather high volume at the moment…).

In terms of nappy changes, she’s also got to that age where it’s very hard to get her to lay down for more than about 5 seconds at a time, so being able to step in and out of the Huggies Pull-Ups was something she really appreciated. It also makes my life a whole lot easier!

Being able to pull the Pull-Ups down like knickers when it’s just a wet nappy is fine, but I also liked the fact that the sides tear apart for dirtier changes, although as one MINOR negative point, I remember there being a sticky tab on the back when I used them for Sausage, to keep everything rolled up when you change them, but that doesn’t seem to be there anymore and it’s very much missed as I now have to use a nappy bag again!

Potty training isn’t something that Husband and I are pushy with – we firmly believed with both girls that if they’re ready, they’ll do it and that has definitely been the case with both of them. Sausage was stubborn at first and I remember more than one occasion of looking on incredulously as she stood, nappy-less, next to her potty and wee’d on the floor instead! BB is applying the same Crammond stubbornness (I don’t know where that comes from…) and is mostly treating her potty with superstition at the moment but we did have a successful poop on the potty today and at just 18 months old, I think that’s really good going! She looked absolutely mystified about the whole process of sitting on a seat to poop, but once she realised what she’d done, she looked pretty pleased with herself!

Huggies are hosting a whole bunch of Potty Training Parties around the UK to help mums and dads with the process and have even got little reward charts and stickers available with a free sample of Pull-Ups to show progress, which I think is a great idea. Sausage always responded really well to reward and although BB is a little young for the concept at the moment, I’m sure in time we’ll use them again.

Overall, we’ve been really impressed with Huggies Pull-Ups. We’ve had no leakages and being able to liken them to ‘big girl pants’ like her big sister wears has really appealed to BB. We’ll definitely carry on using them and I think they’ll be invaluable to the potty training process.