Sausage is in year 3 now and is in a class of absolutely lovely kids. Her main little group of friends are all fantastic and I love chatting with them while they’re lining up in the mornings. One thing that I noticed this morning is the distinct lack of teeth between them! One of Sausages bestows, who we’ll call Miss Custard, was telling me that she’s lost two teeth I’m the past week! She decided to be merciful to the Tooth Fairy though, and put both under her pillow at once so that she’d only need to make one trip to provide remuneration for Miss. Custards gnashers! She excitedly told me that she’d received the princely sum of £2 for both teeth, which according to Sun Life Direct is actually bang on the national average – nice to see that Mrs. Tooth Fairy isn’t perpetuating any sort of North/South pay divide!

Here’s a lovely little infographic, giving you an insight into a few other facts about tooth-related monetary gain!

I was most surprised to see that kids in London are frequented the least by the Tooth Fairy – although, everyone knows that only believers get a visit, so perhaps those toughened, cynical city kids just don’t believe enough to get a coin for their tooth!

Sausage seems to be ahead of the curve with her adult teeth – she’s already lost 5 baby teeth and currently has a wobbled and her adult teeth have grown through on the tops and bottoms. Keeping on top of tooth brushing is vitally important now that her permanent teeth are in and it’s something that we’re really hot on in our house.

Hopefully she won’t need braces once she’s older; I had both “train track” style braces and a retainer when I was in senior school and although I was lucky enough to only need them for less than a year, it was bad enough even during that time!

How much does the Tooth Fairy provide to your little ones? What age did your bigger ones stop being believers? I’d love to hear all about your tooth-related experiences so do leave me a comment below!

Fathers, or men, in particular are quite difficult to shop for. So, when Father’s Day is just around the corner, you go on panic mode trying to find the ideal gift to give to your dad. You think of ties, shirts, a wallet, a belt, or the kind of thing that he commonly receives for birthdays and Christmas. So why not show your dad how much you really thought about your gift this Father’s Day? Surprise dad on this special occasion with these ideas.

Sleep has always been a funny old thing in our house. Husband and I could not be more different – he’s a lifelong, bona fide insomniac who is sometimes awake for days on end, whereas we have a running joke that I could fall asleep standing up…and I actually DID once! Sausage and BB fall somewhere in the middle. Both sleep really well but neither of them are able to fall asleep particularly early, so I always give a little chuckle when I see other people talking about their kids being in bed by 7pm. I literally cannot imagine having that much evening to myself, nor am I sure that I’d want it.

Furniture Village has conducted a “Sleeptember Survey” showing some interesting statistics with regards to the way people sleep, and I must say, I found it really interesting! The thing about green walls really surprised me, as I’ve always found green to be a really calming colour and Husband and I actually have a turquoise colour picked out for one wall in our own bedroom.

One part of the survey which didn’t surprise me was the fact about having a clutter free bedroom. Having 2 kids means that there are rarely ever ANY parts of our house which are clutter free, but I always sleep SO much better on the days that I give the bedroom a good tidy. There’s nothing nicer than slipping into fresh bedsheets in a clean, tidy room for helping you go off to sleep.

Husband and I also far prefer a cool room to sleep in. I’m a bit of a chilly-bones, but I always feel suffocated in a hot bedroom, so we prefer to keep the radiators off when we sleep and layer up with blankets if we get too cold. We recently invested in new mattresses for the whole family, so we’re all sleeping very comfortably, in terms of our furniture.

Currently, we’re living on a busy main road which is also a bus route, which means that the moment people start leaving for work, I’m awake. However, next week we’re moving to a much more rural location with no through-road, just a dead end leading to a river, so we’re hoping that the peace and quiet will be a LOT more conducive to sleep!

What’s your sleep routine like? Do you go to bed at a set time? Do you need a minimum of 8 hours to feel properly human? Leave me a comment below, we’d love to hear all about it! 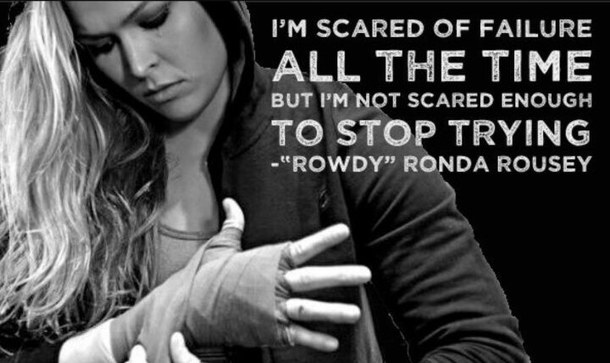 Sausage is getting to an age now where after school clubs seem like more of a priority and Husband and I have been doing a lot of research to find things which we think are suitable for her. She loves a bit of rough and tumble and has been asking about trying a martial art for some time. Her hero at the moment is Ronda “Rowdy” Rousey, the undefeated female champion of the UFC, who  also happens to be an enormous Pokemon nerd, just like Sausage! Rousey’s beginnings were in Judo, in fact both she and her mother are medal-winning Olympians in the sport and Husband and I both think that Judo would be a great sport for Sausage as it’s not about punching and kicking, but throwing and pinning.

A new infographic from World Rugby has been put together to show how parents are actually unfazed by potential injury when it comes to sports because they feel that the benefit of being active FAR outweighs the risks. Here’s the info: 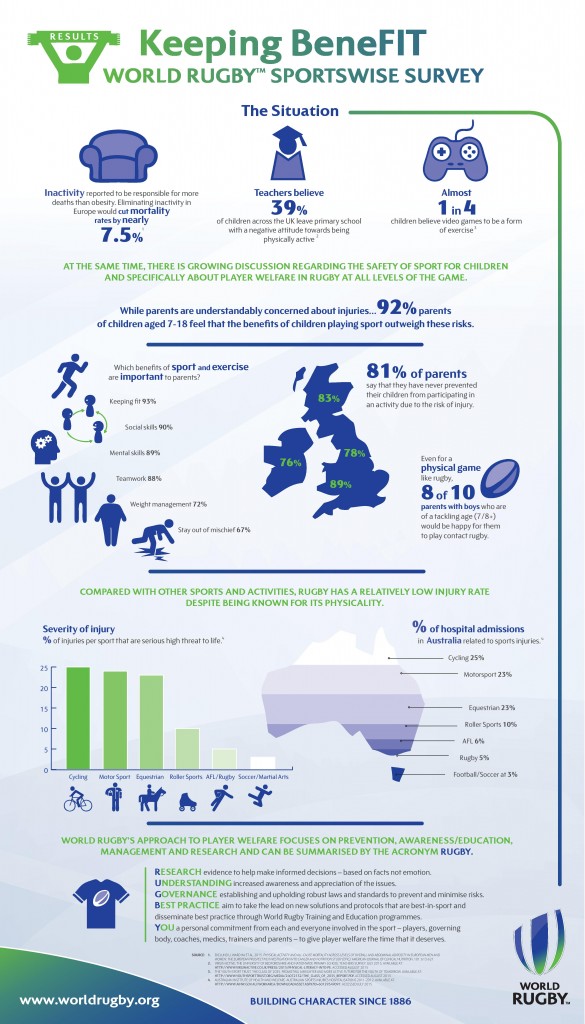 Of the parents polled for the infographic, parents chose weight management, social skills and teamwork, amongst other reasons for encouraging their kids to play a sport. I also think that it’s really important to encourage a competitive spirit. There’s been a real shift towards inclusiveness which can be SO positive in so many ways but I also think that lowering standards to ensure that ‘everyone can take part’ really discourages competitiveness and can stop talented kids from excelling. I’d never advocate nastiness, but I think learning that edge can be really beneficial for kids in later life. Life IS competitive.

How do you feel about contact sports? Are you too protective to let your kids do something where they might get hurt or do you encourage rough and tumble play? Are you passionate about competition or do you think life is competitive enough once they reach adulthood and feel that kids should be insulated from it? I’d love to hear your opinions on this subject!

Yeah, okay, so the title of this post seems rather Star Wars related and I won’t deny that this meme had more than a little bit to do with it: 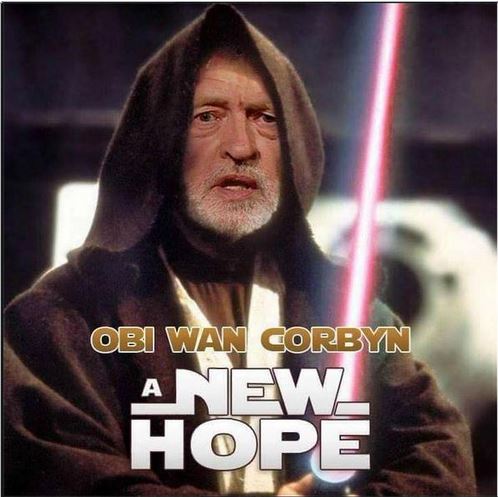 Aside from mildly amusing internet memes though, there does seem to be an air of jubilance and hope surrounding Jeremy Corbyn’s appointment as the leader of the Labour Party. In fact, whilst sitting here on Saturday morning with my daughters, waiting for the announcement to come in, I must admit that I shed a tear when the results were finally revealed. I had to explain to Sausage that my tears were tears of joy (BB was mostly okay…she gave me a hug and then carried on bombing around shouting “CHIPS” at the top of her voice). For the first time in years, I feel hopeful.

I have to admit, I was an Ed Milliband supporter when he was leader. I felt that he was the closest thing to socialism that we’d seen in years and felt that his values matched mine…almost. However, when I first started reading about Corbyn, back when he was struggling to get enough nominations to even run for leader of the Labour party, I felt like my eyes were opened. Ed may have had his heart in the right place, but his version of socialism was down-right wishy-washy compared to Our Jez.

Many of my friends, people I respect greatly, after the general election commented that there was no point voting either way because there was so little difference between what the big parties were offering. Now, that is no longer the case and it feels like we genuinely have a CHOICE. We can choose austerity, big business, decimation of public services.

Or we can choose ‘Corbynomics’. (God, I hate that phrase. I hate how the Tory rags are STILL using it to denigrate Corbyn despite the fact that the vast majority of those in the know agree that it’s sound economic policy and that, actually, AUSTERITY DOESN’T WORK.)

We can choose to have an NHS which doesn’t want to charge us at the point of delivery.

We can choose the possibility of an education for our children which won’t leave them in crippling debt.

We can choose the chance to live in housing which won’t be astronomically expensive.

We can choose to say “NO” to exorbitant energy prices.

We can choose to live in a country where mental health is taken seriously.

We can choose to say “NO” to prioritising nuclear weapons above education, health and housing.

We can choose to tell the likes of Amazon and other wealthy global companies that they MUST pay their taxes.

We can choose a leader who will put a halt to what can only be described as “economic cleansing” by making rents and house prices in London so high.

We can choose to tell our kids that The Arts aren’t only the privilege of the wealthy.

We can choose a leader who won’t take us blindly into wars-for-profit which will benefit no-one but his mates.

Above all else, we can choose to make a move towards a kinder society.

So that’s why I shed a tear. Because the thought of a future like that for my kids, my family and my friends is something worthy of tears of joy. The Tories are running scared, that much is obvious from the horrible smear tactics that they’ve employed in the past few days. The right-wing press seems to have lost its damn mind, printing stories and headlines which look like they’ve been copied and pasted straight from The Onion. It seems obvious to me that they’re pooing their pants.

There may be 5 years until the next election, but those are 5 years in which we can feel hopeful about a brighter future.

Since the General Election, I’ve been feeling pretty disillusioned by what I perceived as a societal move towards cruelty. However, this has buoyed me immeasurably. I’m going to leave you with a quote which says it far more succinctly than I can:

“It’s really a wonder that I haven’t dropped all my ideals, because they seem so absurd and impossible to carry out. Yet I keep them, because in spite of everything, I still believe that people are really good at heart.”

― Anne Frank, The Diary of a Young Girl