A while back, the guys at LamaLoLi got in touch and asked if we’d like to review some clothes for the girls and offered us a £40 voucher to cover the cost. To be perfectly honest, I wasn’t sure that £40 would cover very much for both girls, but boy was I wrong! Here’s what we got:

We also ordered a Minnie Mouse set for BB, but unfortunately it wasn’t included with the items we were sent, however we were absolutely thrilled with the items we received. Sausage is an enormous fan of Big Hero 6 and a lot of the clothing we’ve seen to far have been very masculine, but the t-shirt on the LamaLoLi site was totally unisex and she loved it.

Obviously, both girls love Hello Kitty and there’s a huge range of Hello Kitty stuff on the site, for all ages. We also found the range of characters available quite impressive; Husband is a huge fan of Warner Bros. characters from his childhood and it’s fairly rare to see them on kids clothes nowadays, but the Baby Loony Tunes t-shirt that we chose for BB was gorgeous and very modern.

All in all, we were really pleased with the items from LamaLoLi; the prices are genuinely bargainous, the clothes are all of a really high quality, everything fitted perfectly and there’s a great range of stuff that you wouldn’t find on the high street. We do love a little bit of uniqueness in the MTW house! I’d absolutely recommend LamaLoLi for kids clothes and I’ll definitely be ordering from them again in the future – I reckon I could kit out both girls for the entire summer for under £100 with change for an ice cream left over.

Head over to the LamaLoLi site now for some true bargains and high quality products.

We’re a huge fan of eggs in the MTW house; we often making quick and easy meals on busy days with eggs as they’re a great source of protein and are super versatile. Sausage’s favourite is boiled eggs, which she’ll have with soldiers, while Husband and BB are partial to scrambled. My favourite way to eat eggs is as eggy bread, but with a grown up twist of having a couple of slices of black pudding on the side! Not to everybody’s taste, but super tasty to me!

Lion Eggs have teamed up with vlogging sisters Crumbs Food to come up with a brilliant recipe for baked eggs, and you can watch it right here:

A handy tip is to cut the red pepper nice and small so that you’re kids will eat it! Eggs are one of the most nutritious foods money can buy and are a natural source of many nutrients including high quality protein, vitamins and minerals. They’re also super quick to prepare meals with!

“This is the kind of thing you can really rustle up quickly. Just takes a few minutes to prepare. So it’s perfect for those nights when your busy and on the go…They keep you fuller for longer. It’s one of those things you can eat at lunch and you don’t need to stack before dinner time” Crumbs Food

For further information and lots of exciting recipes head over to http://www.eggrecipes.co.uk – the spinach, feta and pine nut omelette also looks like a good one to try. 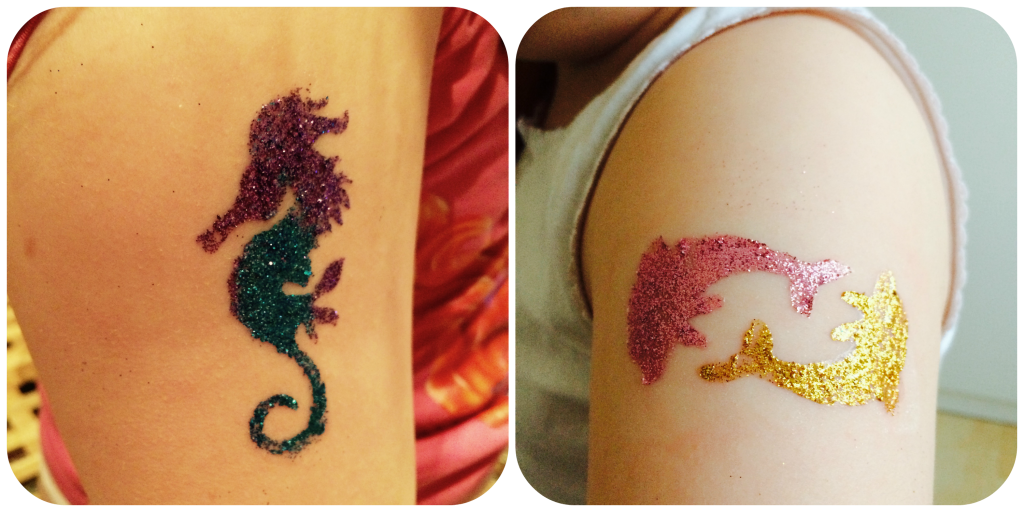 There are some things in life that can make your kids think you’re the best Mum to ever walk the earth. For Sausage, it was the news that I’d managed to acquire her a FabLab Glitter Tattoos set to review. A couple of years ago, we were having a day out along Southend seafront and a lady was applying glitter tattoos to passers-by for a fee (£5 each, if I remember rightly) and Sausage got a dolphin. She absolutely adored it and showed everyone she encountered until it wore off, so the opportunity to do them ourselves was too good to pass up.

The kit itself is really simple to use; simply choose a stencil from the wide variety in the set, stick on to the part of the body you want the tattoo to appear in, paint the glue on, wait 30 seconds, sprinkle on the glitter and peel off the stencil. Voila!

There are six colours included with the set, which meant that we were able to get some really pretty designs out of the kit. Also, if you’ve got kids who are very set on pink being for girls and blue being for boys, you’re covered because the set includes both ‘feminine’ and ‘masculine’ colours and designs.

We had some great results with ours and once we were confident with how to apply the tattoos, even experimented with colour combinations. Husband also gave Sausage a rather ‘gangsta’ free-hand tattoo with her own name in 3-inch high letters across the arch of her stomach, but that’s a photo which will be staying firmly in the family albums!

Glitter tattoos are probably not for you if you can’t stand mess; our living room looked like it had been home to a fairy convention for days after an evening of bedazzling (even Husband joined in and allowed Sausage to apply a rather fetching green lizard!), despite vacuuming, but it’s so much fun that we think it’s worth a little mess. Also, if you were more organised than us you could probably put a sheet down or even do it in the garden if there’s no wind.

Given the fact that we paid £5 for one tattoo to be done a couple of years back, the Interplay kit retails at just £9.99 for over FIFTY tattoos, making it an absolute bargain.

I’m pleased to tell you that we’ve also been given another FabLab Glitter Tattoos kit to give away to one lucky reader. Simply fill in the Rafflecopter widget below for your chance to win!