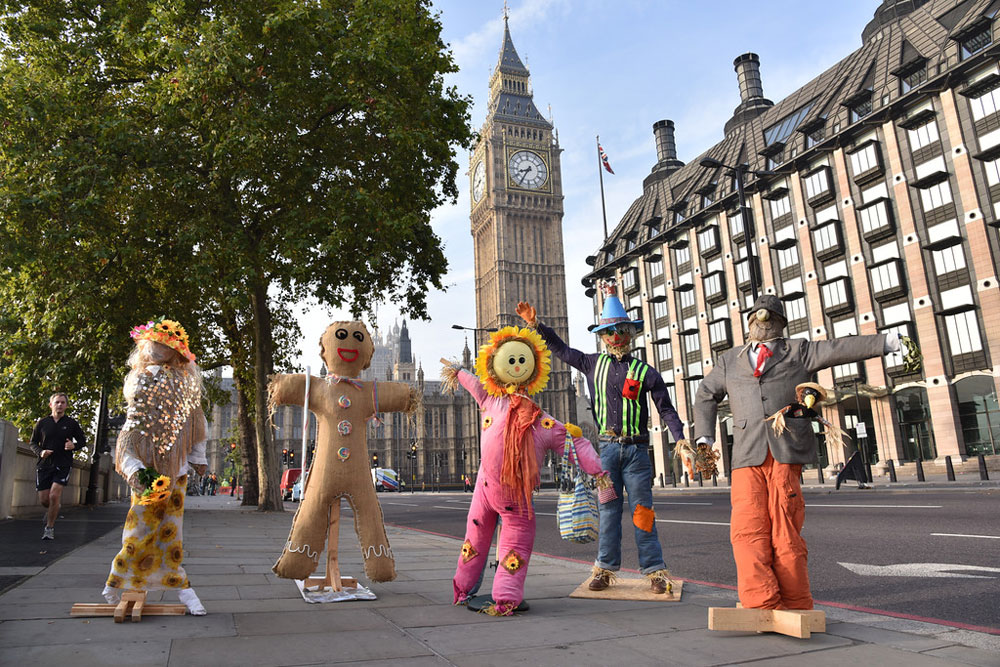 Every now and again, I receive a press-release that’s just too fun to not share with you guys and when this one popped into my inbox, I knew I’d have to give you all a giggle:

Star-crows from Mobberley in Cheshire have hit the big time and won a part on the small screen in the Emmerdale sponsorship ads!

‘The Scarecrow Farm Shop’, created by the Ellison family, made the long journey to London to take part in potato specialist McCain’s first live scarecrow auditions at the Arts Theatre in the heart of the West End. Hopefuls from up and down the country queued around the block for their chance to impress celeb judge ex-Emmerdale actress Sheree Murphy and a panel of McCain judges.

Nicola Ech-Channa, McCain Communications Development Manager, said “We loved seeing what the scarecrow contestants had to offer, and we particularly enjoyed the Scarecrow Farm Shop. Scarecrows are a great British tradition and the festivals put a lot of care and attention into producing their entries – just like we do with all our potatoes. Each scarecrow was created with its own distinct personality and we are awestruck at the amount of time and dedication put into this. It’s a shame we couldn’t let all the contestants win, and it was a close-run race. The makers of Scarecrow Farm Shop should be very proud to have been awarded first place as it was hugely competitive. It’s going to be great to see how they interact with the existing McCain scarecrow clan!”

Sheree Murphy put the hopefuls through their paces and had a tough choice to make in picking McCain’s scarecrow stars. Sheree said “I have been really impressed with the creativity and originality of all the contestants – the level of talent has been phenomenal! It was a very difficult decision but the winner has to be The Scarecrow Farm Shop. What left me in no doubt that we had found our star-crow was the level of thought and detail that went into it. I love that these ‘farm owners’ really had products to sell, and I adored the traditional scarecrow elements that were incorporated.”

The lucky scarecrows will appear as extras in an upcoming series of Emmerdale sponsorship bumpers alongside McCain favourites ‘Granny’ and ‘Straw girl’, plus they have won £5,000 for their village festival next year.

Cheshire can also be proud that as well as first place, another scarecrow – Sarah Jane Sunflower – did very well, being awarded fifth place.

McCain Foods was unveiled as the new sponsor of Emmerdale, one of the UK’s biggest and most loved TV programmes, in March 2014. Like the soap, McCain has long established links to farming, having worked with some of its 300 British Growers for three generations. McCain is also the largest purchaser of British potatoes, buying approximately 15% of the total UK crop each year.

The Scarecrow Farm Shop’s makers, the Ellison family, said “It’s a dream come true to win, we can’t thank McCain enough for giving us this opportunity. Now The Scarecrow Farm Shop can share their star quality with the nation. We can’t wait for next year’s festival, our star-crows will receive a hero’s welcome when they return to Cheshire. And the winnings will make our 2015 festival the best yet!”

Find out more about the winning scarecrow on the McCain Facebook page!