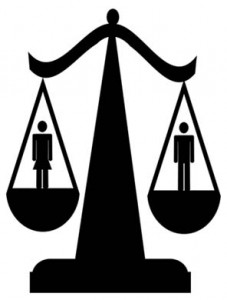 If you’d have asked me, ten years ago, if I was a feminist, my answer would have been a resounding, high-kicking, air-punching ‘YES’. Yes with bells on. Yes with all the ‘girl power’ my 20 year old self could muster. These days? Not so much. Why? Because I hate what ‘feminism’ has become.

Back in the days of throwing ourselves under horses, women had a clear objective: equal rights. Unable to vote or have anything even vaguely approaching equal rights, women rose up and made themselves heard in order to gain the same rights as men and they were ultimately successful. While suffrage may have been the earliest form of feminism, it’s certainly not the last time women have had to fight for equality. Glass ceilings prevent women from earning the same as men or gaining the same positions within the workforce and its thanks to women challenging boundaries that we’re getting towards a more equal society.

However, in recent years, the word ‘feminism’ has been taken to mean something completely different and it’s this version of feminism that I’ll be counselling my girls against.

Feminism is NOT Beyonce singing songs about getting drunk while her Husband makes light of domestic abuse in the background.

Feminism is NOT Kelly Brook thinking it’s funny and cute to punch and physically assault Danny Cipriani and Jason Statham because she’s just a tiny female.

Feminism is NOT protesting a Men’s Rights meeting by pulling a fire alarm.

Feminism is NOT putting men down and considering one sex to be superior to the other.

Feminism is NOT considering other women to be gender-traitors because they choose to raise a family instead of forging a career.

Feminism is NOT calling other women ball-breakers when they choose to advance their careers.

Feminism is NOT assuming that there’s no such thing as domestic abuse against a male, just because he’s male.

Feminism is NOT demonising men for everything they do

Feminism is NOT assuming that every man is a rapist/abuser.

Feminism is NOT diminishing a man’s masculinity for fun or malice.

Beyonce’s ‘Drunk in Love’ contains the line ‘eat the cake Anna Mae’, which is what Ike said to Tina Turner in the biopic of her life, right before he rapes her. I’m completely baffled as to how that’s a reasonable thing to put in a pop song, or how they, as a parent of a little girl, could make light of such an act. Kelly Brook is said to have punched both Danny Cipriani and Jason Statham in the face and when questioned about it, she giggled and said that she’ll look for partners in future who don’t make her want to punch them in the face. Not “maybe I should be a handle on my anger issues and abusive behaviour”. Nope, she’s just deciding to engage in victim blaming which would cause uproar were it the other way around. Imagine if Charles Saatchi had said “Well, next time I’ll marry someone who doesn’t give me the urge to throttle her in public?

The video of the protest has been doing the rounds on the internet for some time now and is on the front page of Reddit today. It shows a group of feminists protesting a Men’s Rights group and setting a fire alarm off so that the group has to discontinue its meeting. Again, let’s play switcheroo – a group of men aggressively breaking up a women’s rights meeting? Unheard of. Wanting equal rights for oneself shouldn’t be at the expense of others.

These are the things that I’m seeing on a daily basis, masquerading as feminism and if I’m honest, it’s starting to look really ugly. I’ve lost count of the amount of adverts I’ve seen on the telly which openly mock men and deride them in a completely puerile and bullying way, just because they’re male. If we did the same thing to women, all hell would break loose and rightly so, but it’s okay to do the same to men?

That, to me, is not equality and that is not what anyone fought for. Equality should really be self explanatory. Equality means that things should be EQUAL. If I thought my girls were being persecuted because of their gender or being passed over in favour of males, I’d be riding my high horse all the way to the door of the person doing so, but I can’t help but feel that if I was the parent to a boy, I’d just be expected to put up with gender discrimination because anything else is patriarchal oppression.

So, if this is what feminism looks like, in 2014, it’s not what I’ll be teaching my daughters. I want to raise women who don’t abuse the fact that they’re female to further themselves, or take a pot-shot at someone else, or raise themselves above anyone else for any reason. Perhaps I’ll teach them that we’re egalitarians, or maybe I won’t give it a name at all. Maybe we should all just learn that equality – true equality – is the only thing we should be teaching our daughters AND sons to believe in.