When Husband and I adopted our beloved dog Chuck, back in 2006, we had no idea just how must he’d do for us, as part of our little family. When Husband was sent home from the hospital after Sausage’s horrible, traumatic birth, not knowing whether his wife and child would pull through, it was Chuck who was there to offer a comforting lick on the hand in his hour of need.

When Husband started working nights and I was at home with Sausage as a young baby, it was Chuck who sat guard by the bedroom door and acted like an early warning system when anyone so much as walked near the house. He gave me an element of peace of mind that I would never have had, had I been alone with a newborn.

When I decided to go on a health-kick a couple of years ago, it was Chuck who ran alongside me while I did my couch-to-5k and Husband has often said how having a dog has really given him a great incentive to stay active, despite doing a sedentary job.

Sunrise Care have put together an infographic to show just how beneficial it can be to elderly people to have a pet, from improving our physical health, mental health and overall sense of wellbeing, having a pet is so much more than just a companion on lonely evenings. 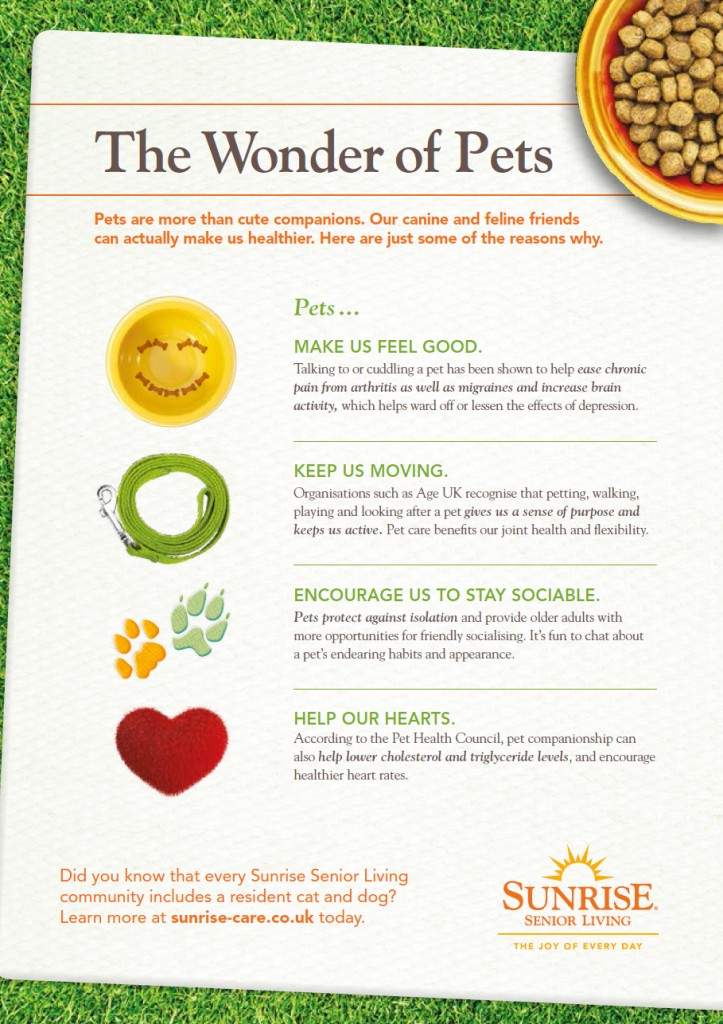 I know for a fact that Chuck had helped with our health, as a family, and I completely agree that he makes me more sociable; I’ve often stopped to chat to other dog walkers when I take him out, and I’ve found that other people are more likely to throw a cheery “Good Morning!” in my direction when I’m walking the mutt.

Chuck is officially a senior dog now – he was around 2 when we got him from the rescue centre, which was eight years ago this October, so he’s not quite as able to go on the super long walks that he enjoyed when he was a younger dog, but he still very much enjoys a yomp around the local fields and now that we’ve got an estate car, he can jump into the boot and be driven somewhere to walk if his legs can’t quite keep up.

Having a dog is one of the best decisions that Husband and I ever made and I never imagined that he’d make our lives as rich as he has. I can wholeheartedly recommend being a dog owner, if not for the reasons stated above but also for the fact that he gives the best hugs you could possibly imagine – and who doesn’t love hugs?!