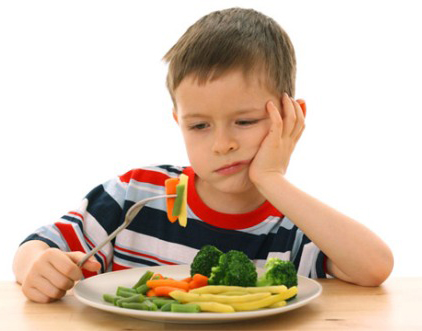 It occurred to me recently that many of my issues with food are huge overspills from my childhood, and I got to thinking about what I would have changed if I could go back. It’s a struggle every day for me to get Sausage’s nutrition right because many of my food-related issues also spill over into the way I deal with her, but I’m determined that she won’t have the same issues I do and I’m lucky that I have Husband to help me moderate things.

I’m aware that there are certain children who just seemingly wake up one day with a new disinclination to eat, or an objection against anything green, but I thought I’d share a few words of wisdom from my experiences, to help other parents. You may even recognise certain behaviours in here that you, yourself, do and decide to do things a little differently.

Don’t make an ‘adult’ meal of something with flavour and a kids meal of something super bland. When I was little, I went through an extremely fussy stage and was fully indulged with nuggets and microchips for the sake of getting me to eat anything. When Sausage came along, we offered her everything and as a result, she’s a 5 year old who loves olives, anchovies, Mexican food, curry, stew – all things that I’d have refused as a child, simply because I was scared to try things. The earlier you broaden their tastes, the better.

2. Understand that most kids won’t spite themselves

I truly believe that if you put a plate of food down in front of a kid that you know they like, in 99% of cases, they’ll never stop eating and claim be full up for no reason. Kids are covetous little creatures and if there’s something on their plate that they want, they’ll eat it, so if your child is telling you that they’re full, unless they’ve only eaten a leaf of lettuce, they’re probably telling the truth. Children are actually very good at self moderating and forcing them to clear their plate stops them, in the long run, from recognising the feeling of fullness and only knowing what it feels like to be stuffed like a Fois Gras goose, which essentially increases their capacity to eat to unhealthy levels and will carry through to adulthood.

3. Don’t use dessert as an incentive

So often, I hear parents say “Well, if you don’t finish what’s on your plate, you won’t get dessert”. What they’re essentially doing here is incentivising overeating with more food, generally food with high sugar contents. If your kid is full, they’re full and they shouldn’t be eating dessert if they’ve no more space, because if it’s put there they WILL usually eat it just for the sake of eating, which is another dangerous habit to get into.

Kids aren’t stupid, and as I said above, are actually pretty good at self-moderation. In my experience, most kids WANT to please, so teach them about nutrition and reward good choices (with verbal praise or even stickers) and see how quickly they’ll make good choices as a reflex. I’m not saying they’ll never go for sweets or ‘bad’ stuff, but if you teach them that they can have sweets providing they’ve made other good choices, they’re less likely to see sweets as a highly coveted prize and won’t go for them by default.

5. NEVER accept “I don’t like it” if they haven’t tried it

One of my BIGGEST bugbears in life, from both adults and kids, is when I hear this:

“Have you tried it?”

Saying you don’t like something you’ve never tried is utter bobbins. We tend to make Sausage try something 2 or 3 times and then if she truly doesn’t like it, we never make her have it, but you’d be surprised by how few things she genuinely dislikes (I can only think of Brussels Sprouts off the top of my head and they actually make her gag!).

If your little monkeys see Mummy and Daddy refusing to eat veg or try new foods, they’re going to see that as an entitlement to behave the same way. Children are very led by the examples their parents set and if one parent is refusing to get on board while the other parent is desperately trying to get more fruit and veg into the kids, it’s not going to work. Obviously, “But Daddy doesn’t eat veg…” isn’t a good reason for your kids to get away with it, but it’ll make your life SO much harder if that’s what they see at the dinner table.

One of the worst things you can do to a kid is give them ‘naughty foods’, on the proviso that they don’t tell the other parent. Stopping for KFC or McDonalds when you’re out shopping is one thing, but adding the “But DON’T TELL DAD” qualifier just turns food into an illicit thrill (or a huge pressure, depending on what way you look at it). Even as an adult, I go through phases of ‘secret eating’, because as well as getting the comfort aspect of food, I seem to attach a ‘well it doesn’t count if no one knows about it’ attitude towards it, too.

8. Portion with your head, not your heart

Husband and I both come from families where huge portions were given as a kind of sign for love. We both spent a lot of time with Grandparents as kids and because they grew up in times of rationing and deprivation, they poured on the love in the form of biscuits, sweets and FAR too much on the dinner plate. It was all done with beautiful, kind intentions but isn’t good in the long-run. As a result, I’m absolutely atrocious at judging how much food is a reasonable amount to give, and we both struggle with the idea of waste, so tend to eat everything put on our plates, even if we’re full halfway through. If you struggle with portion control, have a look at the ‘Healthy Plate’ graphic which you’ll find if you Google it, and try to stick to it, even if it seems like too little food in your heart.

Do you have any good tips that you’d like to pass on? Do leave me a comment below.