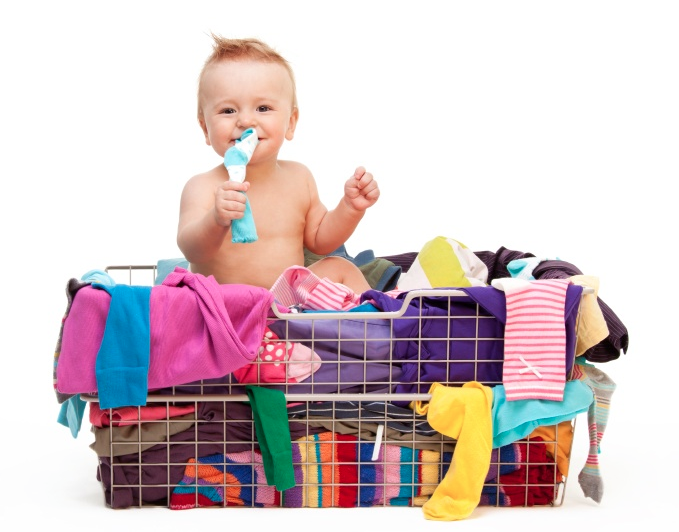 Can you believe BB is almost 5 months old? How can it possibly have gone that fast? Being the dinky dot that she is (more about that in another post), she’s only just gone up to wearing 3-6 month sized clothes and yesterday, I sorted and bagged up all of her newborn and 0-3 month sized stuff to make way for the clothes that fit her. Once I finished, I stood looking at the bag full of tiny rompers and scratch mits and suddenly I felt desperately sad.

I never thought I’d have kids.

Years of gynae problems, starting age 11, meant that it had always been made very clear to me that I’d probably find it hard to conceive, so I galvanised myself by “deciding” that I never wanted kids anyway; a pre-emptive strike against heartache and disappointment. Then I met Husband and things changed. Sausage was conceived after about 18 months of trying and so commenced one of the most miserable pregnancy and labour experiences that one could ever endure. I never wanted to repeat the experience again. I genuinely considered having my tubes tied.

But, bad memories fade and heartache is more of an occasional throb once time has passed, and instead of thinking about what could go wrong if we had another baby, we started to think about all of the things that could go right. We wanted Sausage to have a sibling, an ally in the world when Husband and I cannot be, and we couldn’t see how having another Sausage could ever be a bad thing, so off we went on our mission to try again. And it worked. Quickly this time, as BB was conceived after just 3 months.

Another miserable pregnancy, but in different ways this time; no oesophagus-tearing morning sickness this time, but insulin injections and a million hospital appointments, leaving me weary and more than ready to never be pregnant again by the time BB came along.

And, come along she really did.

The labour was beautiful, a healing experience for both Husband and I, though the subsequent weeks were anything but. BB was diagnosed with a cows milk allergy, but only after about 14 weeks of pain and misery; we were told is was colic, then reflux and she was tried on two different formula milks, Gaviscon to add weight to her food, ranitidine to try to stem what was assumed to be acid reflux, lactulose to deal with the subsequent constipation caused by the thicker milk…making a bottle for my baby ended up being more like using a chemistry set.

As a final attempt before referring her to a paediatrician, our GP recommended that we try her on Nutramigen, a formula milk made without cows milk and almost immediately it was like we had a different baby. The 6-hour screaming sessions (please believe me when I tell you that is NO exaggeration) stopped and suddenly BB was laughing and smiling more often, sleeping through the night and able to get through the day without pain and discomfort. I could have kissed our GP, though I fear she may have objected somewhat. It changed all of our lives.

I can do things with Sausage without having to worry about BB screaming all the time; she’s still a fairly vocal baby and she’s been teething for a few weeks, so things are by no means perfect but they’re a whole lot better. Better, I’ll take.

So, what does my sadness at packing all of the baby clothes up mean? Is it my body’s way of telling me that I do want another baby at some point? Many of the clothes I put away were Sausages’ first, then stored and passed down to BB. Looking at some of those precious little babygrows and knowing that they’ll never have another one of my babies in them again makes me feel more than a little bereft.

And there are SO many ‘buts’.

I’m now over 30. I’m lucky to have managed to have two healthy children already and having another increases the chances of something going wrong. I really don’t do ‘pregnancy’ very well. I still have a bunch of weight to lose that I was supposed to get rid of before BB even came along. We don’t have the space.  Having another means splitting ourselves into even smaller pieces to make sure they’re all being cared for.

And yet, despite all those buts, I still can’t get my head (or my ovaries) around the thought of never doing it again.

Maybe its just my hormones.