We’re still at that stage where we can’t walk more than 10 feet without someone sticking their head into the pram and cooing over BB, which obviously becomes exponentially worse in Waitrose because the main demographic of shoppers is already drawing a pension and therefore are drawn to small babies like a fly to the proverbial ‘you know what’. It’s sweet that people are so nice and want to pass on that positivity, even if answering the same 3 questions (“Yes, she’s very little.” “She’ll be 6 weeks on Monday” “She sleeps brilliantly for a newborn, yes”) does get a little tiresome at times.

But today, I went renegade. I battled against conformity and threw everyone through a loop. I took BB out dressed…IN BLUE! This, so be specific: 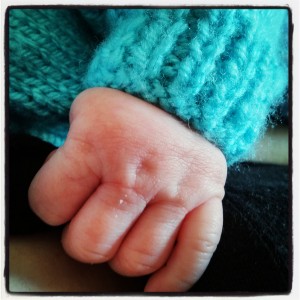 It’s a hand-knitted cardie that used to belong to Sausage and she was wearing it with a red babygrow,

I immediately noticed a change.

Because, by dressing her in blue, I somehow seem to have challenged the gender perceptions of the septuagenarian population of Essex. They could see the pink blanket, my very pink changing bag but the addition of blue knitwear made everyone err on the side of caution. It made me think about MY perception of gender. If I saw a baby dressed head-to-toe in pink, I’d automatically assume it was female, but would a parent not have as much right to dress a little boy in pink, as I do to dress BB in blue?

I’m constantly telling Sausage that pink isn’t just for girls, girls can play with cars and Meccano if they want to. Just yesterday, Husband and I were telling her what it is to be transgender and that some people may appear to physically be one gender but actually feel like they’re something completely different. But how can I expect my daughter to understand gender issues when I buy into them myself?

And then, it occurred to me.

The reason people play the pronoun game is so as not to cause offence. People say ‘your baby’ or ‘they’ rather than ‘he’ or ‘she’ because they think it would be rude to guess wrongly at a baby’s gender. But…why? I guess parental pride could play a part, plenty of parents would find it offensive if someone guessed wrongly at the gender of their little darling, but that seems crazy to me. Sure, some babies really do look overtly masculine or feminine, but let’s face it, most of them are fairly neutral.

We need to stop treating gender as some hot-button of embarrassment and quit being so ridiculous about it. Dress your boys in pink and your girls in blue – colours shouldn’t automatically signify gender, they should be accessible to all, and when a myopic old lady calls your little dude “she”, laugh it off. It’s really not the end of the world, is it?!

What do you think? Would you be cross if someone got your child’s gender wrong? Do you dress your baby in the ‘wrong’ colours for its gender? Let me know!

23 thoughts on “The Pronoun Game”