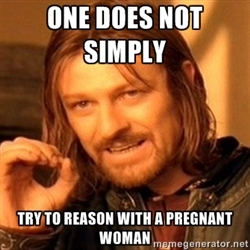 I’m almost 25 weeks gone now and the last few days have brought a new development in my pregnancy.

I’ve turned into an emotional wreck.

Okay, so anyone who knows me well enough will know that I’m not exactly the most…stable person at the best of times, but this is like some whole new level of emotional turbulence. Let me give you an example: yesterday, Husband and I were standing at the queue in Waitrose and there was a man, probably in his late seventies or early eighties, in front of us waiting to be served. The contents of his basket were a single serve apple crumble and a Radio Times. Upon seeing the loneliest collection of items ever, I proceeded to burst into tears in the middle of the supermarket. The thought of this poor old man, sitting alone with only the TV for company, eating his apple crumble made my heart hurt. I felt terrible for crying, though I’m pretty sure he didn’t see my woeful sobbing, but I just couldn’t help it.

It’s not just sadness that gets me, either. I’ve written before about how people’s lack of manners gets to me, especially when driving, but that seems to have escalated now too. I gave way to three people in a row the other day, two of whom failed to thank me, and I felt so cross about their ignorance that I could feel my pulse in my fingers. I sat in my car thinking (amongst plenty of words beginning with ‘f’ and ‘c’ that I won’t write here…) that I genuinely hoped every single one of those people tripped on their seatbelt on the way out of their cars and knocked their front teeth out. I was SEETHING.

As I said, I’m not exactly a measured person at the best of times – I’m a bit of a match-head (can I blame my ginger genes for that? They do say redheads are more fiery and my Dad is as red and fiery as they come!) and do tend to react before I properly absorb a situation, but it’s like that side of my personality had been amplified by a thousand times.  I keep thinking of that quote from Fight Club…”I am Jack’s raging bile duct”

I’m fairly sure it’s the pregnancy hormones doing it to me, and they aren’t going away any time soon – I’ve got 13 weeks left of being a human incubator, so I’m guessing there’s going to be plenty more tears and rage between now and the end of February.

If anyone has any tips with how I can ride this roller-coaster without losing my mind completely, I’d be really grateful for the advice. And do me a favour, don’t suggest “The Little Book of Calm”; my love of Black Books has rendered me terrified of tiny tomes.

15 thoughts on “Pregnancy Hormones: Diary of an Unhinged Fatty”