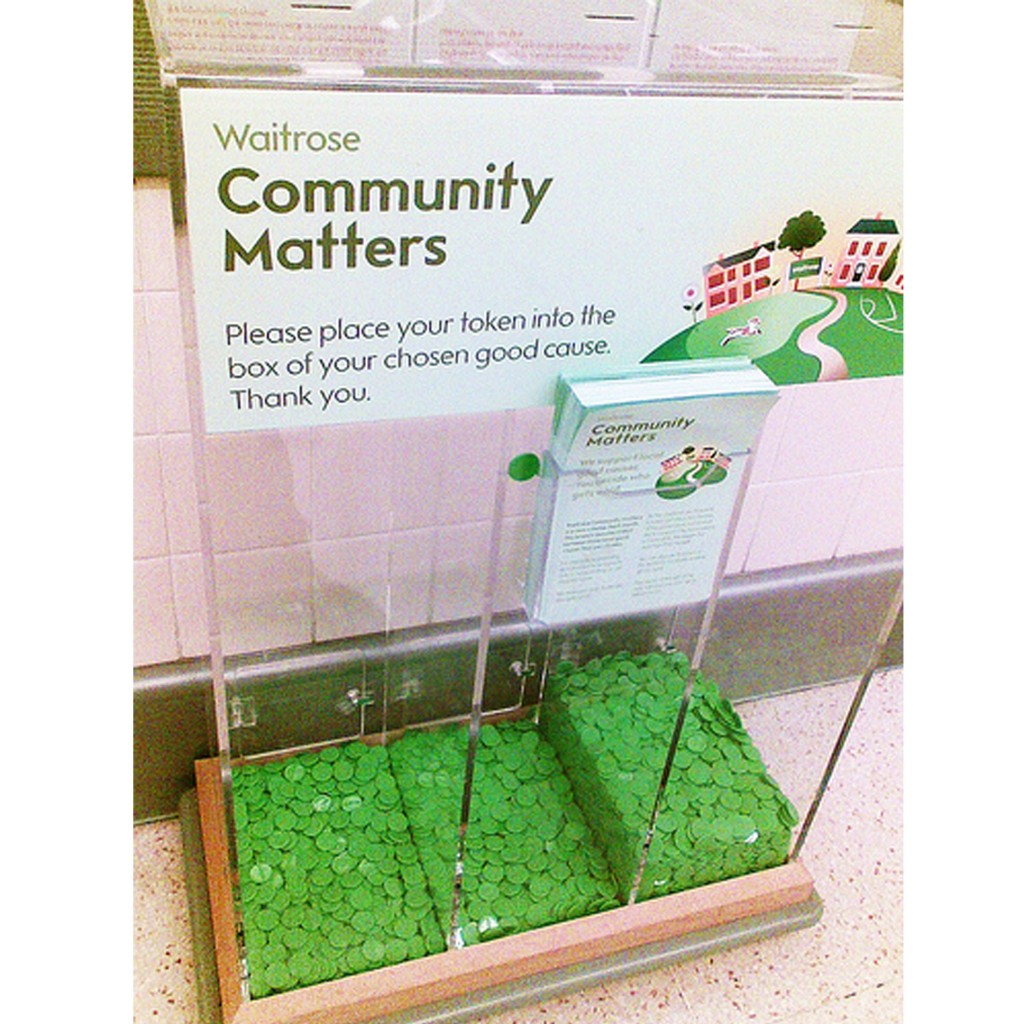 When it comes to charity, everyone has those that are close to their heart; in our case, we tend to give to animal charities, I do Race for Life every year in aid of Cancer Research and our local NICU unit, which cared for Sausage after she was born, always gets a donation if we see a collection. Husband and I have also adopted both a lowland gorilla and a Bengal tiger on Sausage’s behalf from WWF and once those adoptions expire, she’s told us she wants us to sponsor a dolphin, a snow leopard and a donkey next time.

If you’ve ever shopped in Waitrose, you might have noticed that they have a token collection system for local charities. Each shopper is given a green token with their shopping and a box is placed by the exit with three choices of charity or cause for shoppers to choose from. At the end of a month, the percentages of tokens in each of the boxes is worked out and the total gift is apportioned between the three charities. Causes vary from big, well known charities, specific wards in our local hospital and, as of the last week, three local nurseries which need help towards toys, repairs and learning resources.

Being a bit of a disorganised shopper, I tend to get things as and when we need them, rather than doing one huge weekly shop, which means that I go to the supermarket at least three times a week and in this time, the attitudes of other shoppers have really shocked me.

Rather than looking at the three nurseries who are politely asking for help and deciding which one they’d rather the donation went to, I’ve seen several people tuck their token back into their purse or wallet and walk away, dissatisfied with the choices of cause. I won’t even go into the fact that it’s nonsensical, given the fact that its worked on percentages of a whole, meaning that each cause will still get the same portion of the cash. The thing that has shocked me is people’s begrudging nature.

Waitrose have chosen which three causes to help at this time, causes which they believe are worthy of help, and they aren’t asking anyone for any money, they’re simply asking for people’s opinion on how they should divvy up the donations that they make. The people who put their coins back in their purses have stooped to a whole new level of begrudging by not placing their plastic token into a box and it absolutely amazes me.

I can only assume that the refusal to help three local nurseries comes from the same place as the dirty looks that old people give mothers trying to navigate their way around with a buggy – it’s like they’ve completely forgotten that they once had kids and had to face the every day challenges that life brought. Surely, if their kids were at nursery and they needed funding, they’d have been willing to give their token then?

As I said, most people have their ‘favourite’ charities to which they’ll give their time and money and I understand that they’ll go out of their way to help charities which are close to their hearts, over and above others which aren’t, but I simply cannot understand (or stomach, if I’m honest) the thought that people can be so begrudging and mean when it’s not even their own money they’re spending.

What do you think? Am I being too judgmental, or would this behaviour bug you too?