The epic and generally wonderful Mummy Barrow has tagged me in a meme (one which I was secretly hoping to be tagged in, if I’m honest) based on the TV show Room 101 and meme-ified into blogging history by Helen at Stickers, Stars and Smiles (who is also epic and wonderful). I love the concept of the TV show and am pleased to be able to finally watch it again after they got rid of Paul ‘I’m an unfunny skin-flute’ Merton, who I cannot abide but won’t stoop to waste one of my Room 101 spots on.

So, without further ado, here are the three things, or three sets of people as it transpires, that I would place in my very own Room 101.

People Who Don’t Pick Up Their Dog Shit 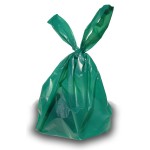 Why is it that some people want to own dogs but refuse to pick up their excrement? Is there anything worse than stepping in the freshly-lain cable of someone elses hound? Actually, yes, it’s worse when you’re walking your own dog and have stooped to pick up their shit, in the manner of all decent dog owners, and go on to step in something left by someone else. And don’t even get me started on the absolute mother f*ckers who bag it and then DROP THE SHIT FILLED BAG. I think I hate these people because they think that they’re beyond scooping, to which my answer would be “Well, don’t get a fucking dog then!”. If you want a dog, there are certain responsibilities that go along with it and scooping poop is one of them.

People Who Believe Everything They Read in The Daily Mail 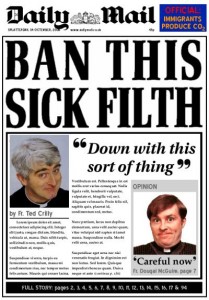 Look, I know The Daily Mail looks like a real newspaper; it’s made of paper and has something pretending to be news in it. Unfortunately, that’s where the similarities stop. The stuff that’s printed in The Daily Mail is generally, in a news sense, on par with what was left on the pavement in the point above. So why, oh why, are people still being sucked in by it’s jingoistic, anti-everything bollocks? Do you really believe that people on benefits are living the high life or that evil immigrants are taking over our country and breeding us out? Or maybe, just maybe, you’re a terminally outraged peanuthead and the crap in The Daily Fail fits in with your narrow way of thinking, helping you to feel justified in the fact that you’re a complete bigot. 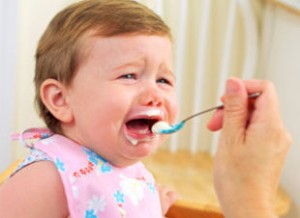 I have one question for the people who do this: HOW DO YOU KNOW?

How can you possibly ever claim to not like something if you’ve never tried it? This mainly applies to food, because there are obviously legitimate circumstances that would let you know that you wouldn’t like a particular experience (deathly fear of heights? You probably won’t like base jumping then, and I’ll let you off of having to prove it). But if you’re THAT much of a baby that you’d rather not even put something in your mouth and taste it before you rule it out of your life completely, then you deserve to only consume lukewarm tap water and the protein-gruel that the eat on the Nebuchadnezzar  in The Matrix for the rest of your boring, dull life.

I now tag the following people to give me their entries to Room 101:

Clare at Seasider in the City