Last week, we went to Lakeside for our Build-a-Bear experience and on the way out, grabbed a pretzel each from the vendor there. Not the small, hard pretzels that you get in bags but the large, bready ones that you find in Germany, and we all loved them.

Husband has been to Germany many times and even to a few proper beer kellers in Munich where they have ladies walking around selling freshly baked ones, but he’d only ever had a pretzel at Disneyland, so I decided to have a go at making our own, so that we can have them whenever we want.

After a little research, I discovered that true Bavarian pretzels are dipped into Lye (caustic soda) before baking to get the shiny, dark brown exterior but it’s difficult to buy food-grade Lye in the UK as it’s quite dangerous and can dissolve human flesh! We discovered that you can use a bath of bicarbonate of soda and water as a substitute, which doesn’t give such a deep-brown shine but still gives a good colour and crisp, so I thought I’d give you all the recipe and method to make your own. 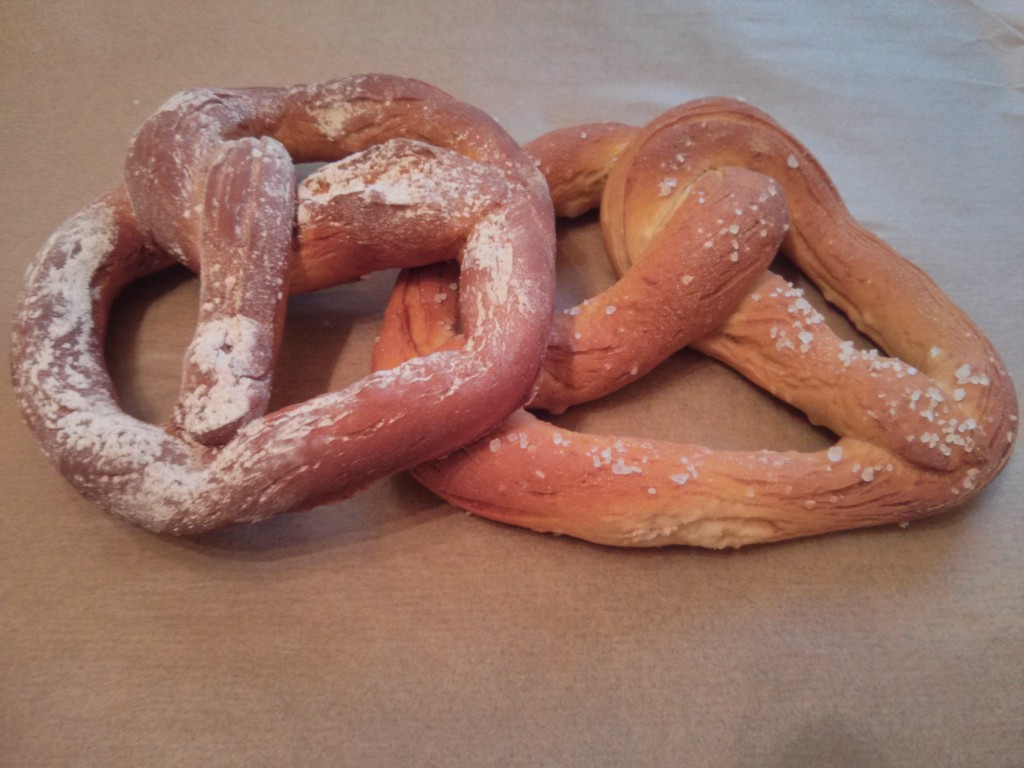 ^ Sift in the salt and flour

^ Start bringing the mixture together with a wooden spoon

^ Once you have a solid mass, start kneading

^ Knead the dough for ten minutes until smooth and elastic. It doesn’t need to prove before shaping

^ Take each piece and roll into a long snake which is slightly thicker in the middle, about 15 inches long

^ Make the pretzel shape by holding each end of the snake, crossing the lengths over each other twice and sticking the ends at if they were at twenty to four on a clock

^ Take the moulded dough shapes and one by one, submerge into the bicarb solution for about ten seconds

^ Place the dipped dough onto the parchment paper, four on each tray and reshape a little if needed

^ Once all of the dough has been dipped, season one tray with sea salt

UPDATE: Carolin and Helen were true to their word below and both made their own pretzels! You can find their recipes HERE and HERE.